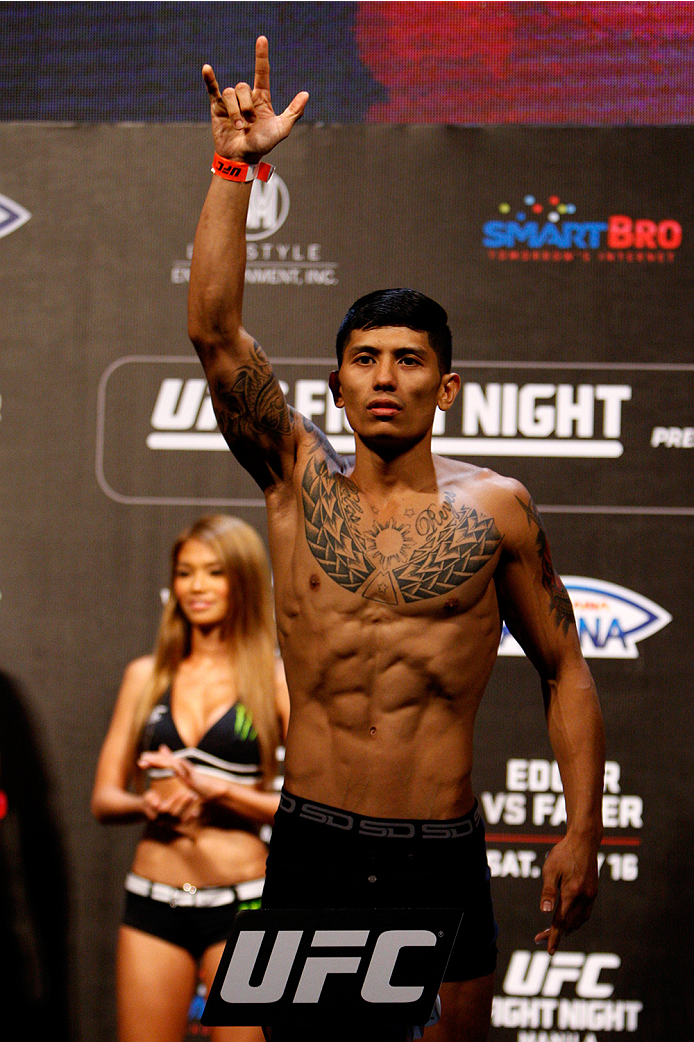 After an 0-2 start to his UFC career, Jon Delos Reyes was under no illusions when it came to fight number three against Roldan Sangcha-an in May. If he wanted to keep his place on the promotion’s flyweight roster, winning was imperative.

“Yeah, there was a lot of pressure,” he said. “Before that fight I had to fight two veterans, tough guys, and I didn’t get to show what I’m capable of. So there was so much pressure, especially in Manila, that’s like my motherland. I needed to show a really good fight.”

Reyes didn’t get any easy marks in his first two Octagon bouts, where he lost to Dustin Kimura and Kyoji Horiguchi, so he was confident that he was going to get the job done against Sangcha-an. But if winning wasn’t pressure enough, the Guam native was fighting in the Philippines, and as a young man of Filipino descent, this was a big deal.

Oh yeah, and his mother was there as well, watching her son fight live for the first time.

“She was excited,” Reyes said, “but when I started bleeding she was panicking. She almost fainted.”

Reyes’ mom was a trooper though, making it to the end of the fight, which came at 3:13 of the second round, her son the victor via rear naked choke submission. Throw in a Fight of the Night bonus, and Reyes left Manila a happy - and hungry - flyweight.

“It made me even more hungry, knowing that I belong here,” the 28-year-old said.

With that first UFC win business out of the way, Reyes can now focus on his future, which kicks into gear on Saturday with a UFC Fight Night main card bout against Irish veteran Neil Seery. It’s a fun fight on paper, and Reyes is excited about competing in Dublin.

“I’m really looking forward to this,” he said. “Dublin was like the loudest crowd (in the last UFC event there in 2014), and when the Irish fans came out here (to Las Vegas) for Conor (McGregor)’s fight when he fought (Dustin) Poirier, it was insane. It was one of the loudest crowds I’ve ever felt, and that was just the weigh-ins. So I’m looking forward to a loud crowd like that.”

Even if they’re cheering for Seery and not him?

“I don’t mind going into hostile territory, but I think it’s going to be a wild fight, and I want to try and gain the respect of the fans from Ireland and turn the crowd,” he said. “That would be nice.”

Another win would be even better, and in the wide open flyweight division, it only takes a few of those to get in the title race. If that happens for Reyes sometime in 2016, would he be ready?

“If the bosses call you and offer you the fight, I can’t say no,” he said. “You can’t let opportunities like that slip away, so I would jump on it.”

Maybe mom would come out to the fight again as well. But she needs to be warned that her son isn’t interested in low impact bouts. He’s looking to get in a fist fight.

“I want people to know that I’m going to keep pushing the pace, no matter if I’m losing a fight, cut up and bleeding,” he said. “I’m gonna keep pushing forward.”