Johny Hendricks - To Be The Man 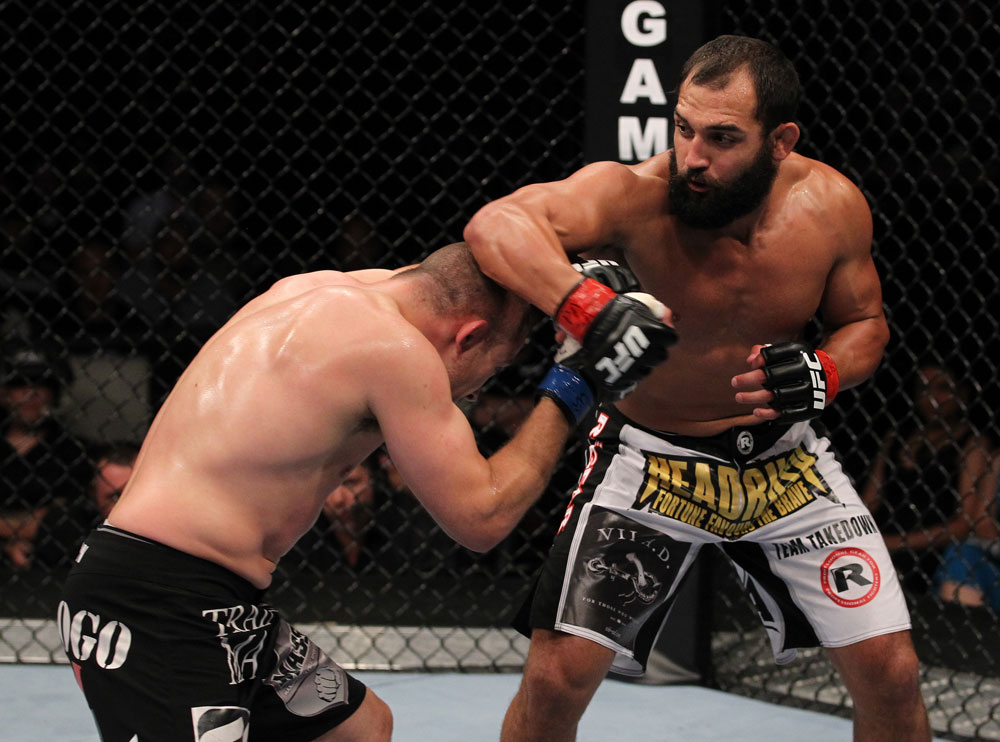 There are two great prizes in the UFC’s welterweight division and Georges St-Pierre has both of them. The first is the championship belt and the second is a win over Jon Fitch. In his 15 Octagon appearances, Fitch’s sole defeat was in his only title shot against St-Pierre in the “Fight of the Night” winning main event of UFC 87 in August 2008. Actually, the nearly unparalleled career of St-Pierre has one more loss inside the Octagon than Fitch.

In many regards, the great unanswerable riddle for the UFC’s 170 pounders isn’t about winning its title, but, more so, how do you stop Fitch? At UFC 141, Johny Hendricks will step into the cage against Fitch and he believes he has the answer to beat him. Hendricks won’t be revealing any secrets just yet. Everyone will have to wait and see on December 30th if Hendricks can catch the welterweights’ white whale.

“I think I might have solved it,” asserts Hendricks. “That's what it really boils down to. The style that Fitch's good at, he's so good at. Whenever he starts to do what he's good at, you have to be able to capitalize on it and stop him. How do you stop him? I don't want to give it away, but I think I have what it takes to defeat him.”

There is no question that Fitch will be Hendricks’ toughest test to date in his relatively short career. With an overall record of 11-1, Hendricks began MMA just over four years ago and quickly made it to the UFC, with his lightning fast knockout of Amir Sadollah at UFC 101 in August of 2009 marking a spectacular debut. In his two years in the UFC, Hendricks has been very impressive, going 6-1 including a “Knockout of the Night” against TJ Waldburger last March. These experiences have led him to this opportunity to challenge a top tier fighter and he is not the man to squander it.

“It's a fight where I have to do everything I can in it,” states Hendricks. “It's not just another fight. I have to go out there and do my best performance because a title shot does not come easy in any division. Knowing that, if I have a bad performance, I might have to have another three fights before I get another shot at a number two or even a number five. It's really important that in every fight you get better and in every fight you are constantly doing the right stuff. I want the fans to know that I went out there and competed to my fullest. I did everything I could. That's what this fight is about. I'm going out there, I’m doing the right stuff and I’m somebody that should be considered a top welterweight and shouldn't be overlooked.”

Although Fitch is more famous, higher ranked, and more experienced inside the Octagon, if he underestimates Hendricks in any area then that will be his first and last mistake in this fight. On the ground, Hendricks is a four-time NCAA Division I All-American wrestler out of Oklahoma State University. Better yet, Hendricks won back-to-back National Titles (2005, 2006) and was the runner-up in 2007. Hendricks was almost literally ‘unstoppable’ as an amateur wrestler from high school through college, so it doesn’t take a brain surgeon to know that Fitch will have his hands full there.

As far as the standup, discovering how to strike and being comfortable with it has been what Hendricks’ whole MMA career has been about. If you have watched Hendricks fight, then you have watched him exchange standing and usually get the better of it. It has been a learning process though when it comes to doing it when the big lights are on and not just in the gym hitting pads. This was no more evident than in Hendricks’ last fight, which was a slugfest split decision win against Mike Pierce at UFC 133 in Philadelphia.

“My feelings going into that fight were to see if everything I had been training and training to do better did get better,” explains Hendricks. “That was my main focus in that fight. Before that fight, I went back and I saw some holes in my game. I wanted to make sure that I prepared myself and made myself better. I wanted to really see what I can do and what my body can allow me to do. You can train as much as you want on something like a rear naked choke and if you get there in a fight and it doesn't feel comfortable to you then you just wasted three months on a rear naked choke. Now, I know what worked and I know what didn't feel as good. I can see what I want to bring out and focus on. I can sit there and nitpick what I want to do and what I feel 100% confident in doing going into this fight. I focused on those attributes that I could make better and then charged on. Keep building. Now, let's get a steamroll effect.”

At 28 years old, the native Oklahoman is looking to earn himself his second three fight win streak in the UFC and this time it will be through arguably the most revered opponent he could face, Fitch. To get ready for this high profile bout, Hendricks is hard at work with his Team Takedown counterparts (Shane Roller, Jake Rosholt and Jared Rosholt), former Ultimate Fighter alum - and former Fitch opponent - Ben Saunders, and Hendricks’ new striking coach Steven Wright. Also, Hendricks went back to his alma mater with his old coach John Smith to dust off those vaunted wrestling skills.

“I didn't focus too much on the wrestling transition in MMA at first because I wanted to make sure I worked my butt off on the standup,” divulges Hendricks. “I knew I could come back on the wrestling and relearn it. I knew I would have to relearn it, but that was a sacrifice I was willing to make. I really needed to learn the other attributes in MMA and I could come back to wrestling. Now, I feel like my wrestling is just as sharp as four years ago.”

This Friday, Hendricks will look to solidify his place among the MMA elite by beating the MMA elite, Fitch. “My main goal is to make my statement that this is where I belong,” affirms Hendricks, who is unquestionably one of the best wrestlers of his generation and will be on his way to becoming one of the best UFC welterweights of his generation if he gets his hand raised - it’s as simple as that. “I’m going out there and doing the best I can and making my statement and that's it.”