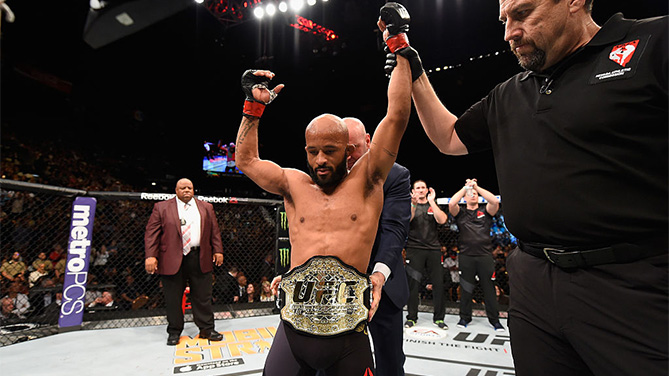 The UFC's most dominant champion, Demetrious Johnson, will return to the Octagon on Saturday, July 30, to make his ninth UFC flyweight title defense against Brazil's Wilson Reis in the co-main event of UFC 201. The winner will then go on to face the The Ultimate Figher: Season 24 champion who will earn an immediate title shot. Both stories were reported first by Megan Olivi on UFC Tonight.

UFC 201, which is headlined by the welterweight championship fight between Robbie Lawler and Tyron Woodley, takes place at Philips Arena in Atlanta.

Unbeaten in 11 fights since 2011, "Mighty Mouse" Johnson has faced and beaten all comers at 125 pounds, successfully defending the title he won in 2012 eight times. Most recently, Johnson scored a first-round knockout of Henry Cejudo at UFC 197 in April, and now he will meet the eighth-ranked Reis, a Brazilian Jiu-Jitsu black belt who has won three of four fights since moving from bantamweight to flyweight, with a January decision over Dustin Ortiz his latest victory.