Johnny Bedford - From The Barn to The Palms

"It’s gonna be really hard to break me. I fought in the worst settings you could possibly think of. I’ve seen everything you can throw at me." - Johnny Bedford 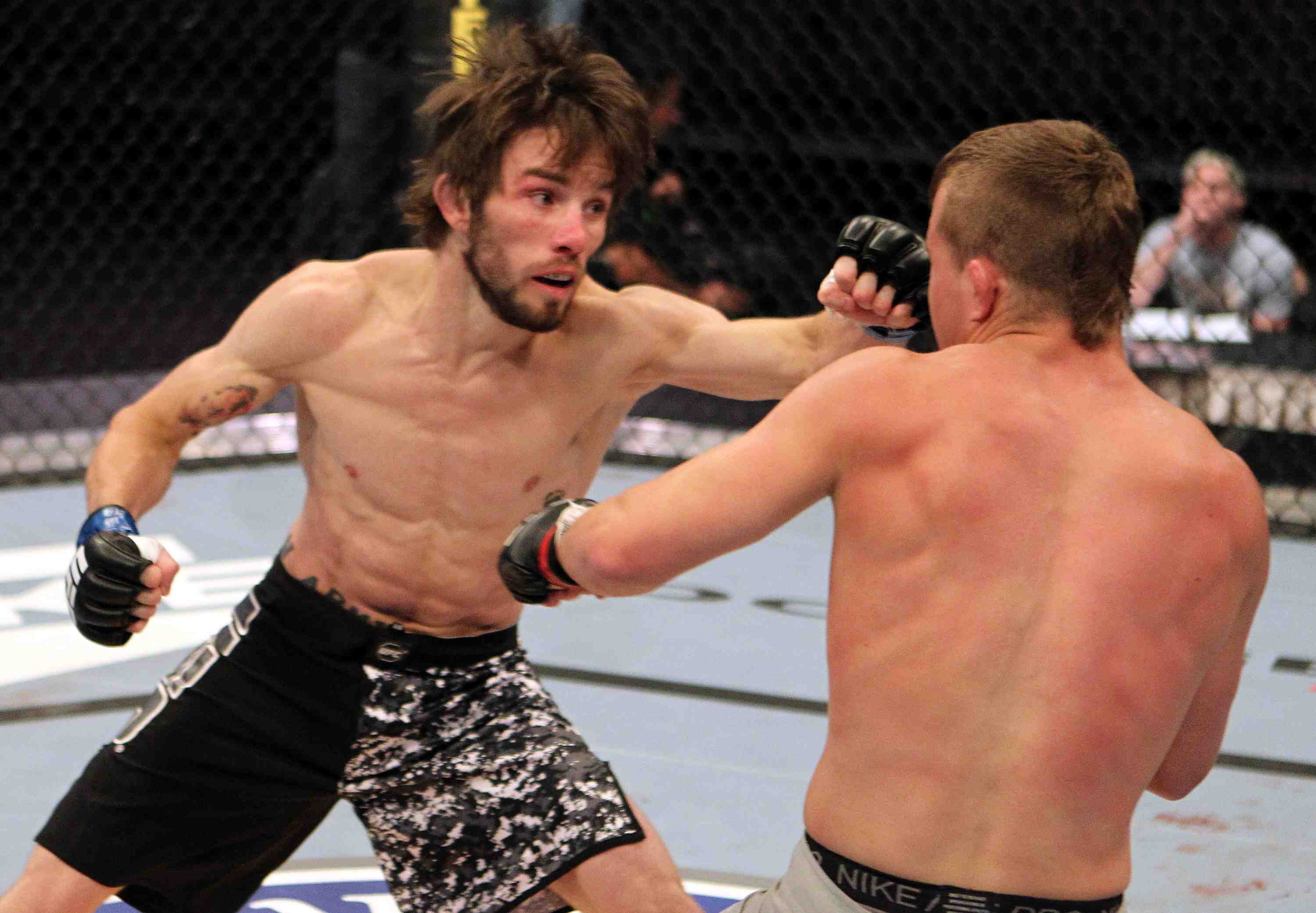 It was an angle too tempting to pass up, asking The Ultimate Fighter season 14 bantamweight Johnny Bedford about that time he fought in a barn.

“Man, I probably fought in more than one,” laughed Bedford, and it was clearly time to grab the popcorn, because this wasn’t going to be your typical ‘journey to the UFC’ story. And the 28-year old Ohio native didn’t disappoint.

“When I started fighting, there weren’t even athletic commissions,” he said of his formative years in MMA. “There was nothing. It was crazy. I was fighting up to three times a month a lot of times, making a couple hundred dollars to fight. There weren’t even win bonuses back then. You’d get like two hundred bucks to fight and you had to pay your gas, so by the time you got there and got back and got dinner, you made $50.”

You could almost chalk up this beginning to Bedford being a wild brawler who was simply looking for a legal environment to scrap in. But that’s not the case. Bedford was a seven-time AAU national wrestling champ who even wrestled on the Division I level for a year and a half at Cleveland State University, and while he didn’t get his degree, he did still want to compete, hence his migration to mixed martial arts. But this wasn’t the MMA that you were seeing on the UFC or PRIDE level back then. This was a whole other animal, and Bedford was getting a crash course in the school of hard knocks.

“It’s hard to get motivated when you fight three times a month, you don’t even know your opponent, and then they change it the day of weigh-ins,” he said. “I’ve had amateur fights where we showed up and they literally said ‘raise your hand if you want to fight.’ All the guys that wanted to fight got on a scale that looked like they borrowed it from his mother’s bathroom, and they said ‘okay, you two are the closest, you’re gonna fight.’”

Bedford persevered though, hopeful that something would eventually break, just not him. His early record is spotty, with a few wins broken up by a loss or two before he began the cycle again, and soon, he wasn’t just in a situation where he was trying to support himself. Eventually, he got married and the couple welcomed a son into the world. Now what was a dream was turning into something where he had to figure out how to make ends meet.

“It didn’t make a lot of sense,” he admits. “Luckily, in the real hard days, when I was making no money at all, I was still single at the time. But shortly after, I was married in 2006 and we had a son later on that year, and it was the same story. I was fighting all over the Midwest for a couple hundred dollars a fight, and by then you would get some travel money, but I was working at UPS just for the insurance. My paycheck every week from UPS was about $80. So I was fighting two, three times a month, and a great payday back then would be 2 and 2 or a 3 and 3. And that’s hundred, not thousand.”

Being a fighter whose optimum weight is 135 pounds gave him even more of a burden to carry, especially since there were few options for bantamweights or featherweights with less than stellar records.

“It was disheartening,” said Bedford. “I went through numerous times where my wife and I would have that conversation – is enough enough? Even making the WEC four years ago, which was the goal at the time, still didn’t pay what the UFC did, and you still didn’t get the notoriety. You tell the average fan that I’m hoping to get into the WEC and they’re like – what’s that? I started my career weighing at 155 pounds and that’s what I fought at because you couldn’t find fights at ‘45 and ‘35.”

So when Bedford finally put together a solid run in 2009-10 when he won six of seven fights, including a December 2010 submission of WEC vet Frank Gomez, and got a call to compete for a spot in the Ultimate Fighter 14 house, he may have been an underdog, but he was an underdog that bites. And he certainly locked his jaws on favorite Carson Beebe (the brother of former WEC champ Chase Beebe), submitting him in the first round to earn his place on the TUF 14 cast.

That was the easy part.

“Some people think that it’s glamorous and it’s so awesome to be there,” he said of the TUF experience. “And my answer is always honest and to the point – it was terrible. (Laughs) It was the worst six weeks of my life. Would I do it again? Absolutely. But while you’re there for six weeks, it’s miserable. You’re literally cut off from the outside world. And me being a husband and a father, for the last four and a half years of my life, I woke up every day and saw the same two people. And they completely cut you off from that, and it was tough. It turned out to be tougher than I thought it would, for sure.”

Bedford would go on to win another bout in competition, decisioning Josh Ferguson, before getting knocked out in the bantamweight semifinals by John Dodson. This Saturday he gets another shot at staying in the UFC though, as he’ll battle castmate Louis Gaudinot in the main card opener.

“It’s a great fight for me,” said Bedford. “I think he (Gaudinot) is obviously talented. He was the first overall pick for (TUF14 coach Michael) Bisping, which I was kinda blown away by at the beginning. But he’s a small 135 pounder and I’m about as big as they get, and I think my size, my reach, and my height advantage is gonna play a big part in this fight. Another thing is that I have a much better wrestling pedigree and I can put him on his back when needed. I’m blessed to get that matchup and I feel like it’s a good matchup for me to get a win and keep moving forward in my UFC career.”

A UFC career. It sounded like merely a dream for Bedford back in his salad days, but now it’s nearly a reality. And if you doubt what such a fistic upbringing can do for a fighter, don’t. Coming up the hard way can do wonders for you when you have to dig deep to win a grueling fight.

“It builds toughness,” said Bedford. “It’s gonna be really hard to break me. I fought in the worst settings you could possibly think of. I’ve seen everything you can throw at me. These guys who are just getting into the sport, it’s crazy to think about. My brother in law (Evan Cutts) just fought on national TV two weeks ago. It was his third pro fight and he’s 20 years old. He fought Reagan Penn and beat him, and he made the equivalent of my best payday before the UFC. (Laughs) And he’s grateful for that.”

Johnny Bedford is grateful to finally be here. And it will take a helluva fighter to make him leave.