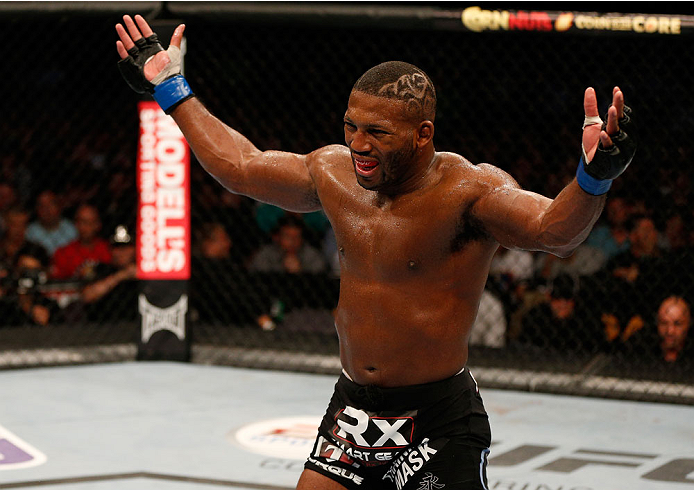 That’s how UFC welterweight John Howard described the wondrous feeling of winning in his return to the Octagon, on FOX Sports 1, and, most importantly, in the famed arena of his hometown of Boston, Massachusetts.

“Best feeling in the world,” exclaims Howard of the August bout. “Fighting in the (TD) Garden. I call it the Boston Garden. That's always where I wanted to fight. It was great. It was one of the experiences that I can't really explain it. It was just so good. It was like having your first child.”

The 30-year-old, seven fight Octagon veteran got a rebirth as a UFC fighter in a bout with the odds stacked against him, but “Doomsday” reigned supreme in the end. Howard’s first UFC stint saw him win four straight at welterweight before losing three straight. Since then, he went 6-1 at middleweight in a local league, including five knockout wins. At UFC Fight Night, the born and raised banger from Dorchester marked the beginning of his second shot in the UFC by taking on The Ultimate Fighter 17 finalist Uriah Hall on short notice and in that higher weight class.

“I really appreciate the UFC giving me a second chance,” tells Howard. “I had a lot of critics around me. Even though I was going to be smaller and I wasn't the favorite to win, I showed you can't count me out. I'm here to win. If you give me a chance, I'll win. I'm really proud of what I did and what happened, and it was a dream come true.”

Replacing Hall’s cast mate Josh Samman due to injury, Howard provided veteran opposition that was riding an emotional high as he represented “Boston Strong,” which proved to be too much for the TUF alum in his second Octagon appearance. What many expected to be a striker’s duel became an in-and-out fencer’s fight with a surprising amount of takedowns and ground action for two well-known standup specialists. While not what was anticipated, it was a competitive 15 minutes, which two of the three judges saw in favor of Howard.

“I thought it would be more of a banger's war, but Uriah's a smart fighter and he kept it real technical,” explains Howard. “I didn't expect a takedown real early. I did expect him to try and take me down after we stood for some. I thought he would be more aggressive and come out swinging and looking for the knockout. I think my skills of being a high-level striker made him back off. There was just an exchange here and there, but it didn't go off. Once he found out, he didn't want to exchange and it was a fight to outpoint basically. I was surprised he didn't push the action more than he did. I thought my experience would lead to the outcome of the fight and I was right. I'm satisfied with the victory.”

Up next for Howard could be haymaker heaven on December 28th at UFC 168 against the heavy-handed Siyar Bahadurzada. Afghanistan’s greatest MMA export is coming off a lukewarm loss to Dong Hyun Kim in March following his highlight reel knockout of Paulo Thiago in 2012. Prior to losing an uneventful unanimous decision to KIm, Bahadurzada was relishing a seven fight win streak that featured six knockout victories coming almost exclusively via punches. Between Bahadurzada’s bricks for fists and Howard’s brutal Muay Thai, this should be a fan-friendly welterweight war.

“Siyar is a banger,” asserts Howard. “He comes to bang. He doesn't care who you are. He has a good chin. I'm very excited. I bang too, so I'm very excited for this fight. He has pretty good takedowns, but he has a mean right hand. He has mean hooks, and I have mean hooks too. It's going to be who gets off first, who lands first. I think I'm going to land first, but you never know what's going to happen. I'm going out there to bang and exchange.”

In preparation for Bahadurzada, “Doomsday” is sharpening his striking skills with the hard-hitting lot at Wai Kru MMA. Nestled away between the eggheads in Cambridge and the suburbs of Brookline, Allston’s talented Muay Thai kickboxing coaches like Kru John Allan and Kru Mark Klemm have been helping Howard get back to his roots of delivering blows both powerfully and technically. Also, boxing great Vinny Paz has also become a major influence in transforming Howard into a knockout artist.

And let’s not forget, Howard has been sparring a lot with retired UFC veteran and fellow fighting pride of “Beantown” Jorge Rivera, who will be in Howard’s corner come fight night.

At UFC 168 at the MGM Grand Garden Arena in Las Vegas, two welterweights will look to grip and rip toward an explosive finish as Howard tangles with Bahadurzada. “Two pure strikers going in there and banging,” affirms Howard, who would love to add a second Knockout of the Night bonus to his resume via knuckles, knees, and / or kicks. “Siyar and me are like K-1 kickboxers who do MMA. You're going to see two K-1 guys who are looking to bang in an MMA setting. We are going to go out there and put on a show and blow it out for the fans.”

Of course, Howard’s return to form would not be complete without his tried and true catchphrase / warning, “Here comes the doom!”