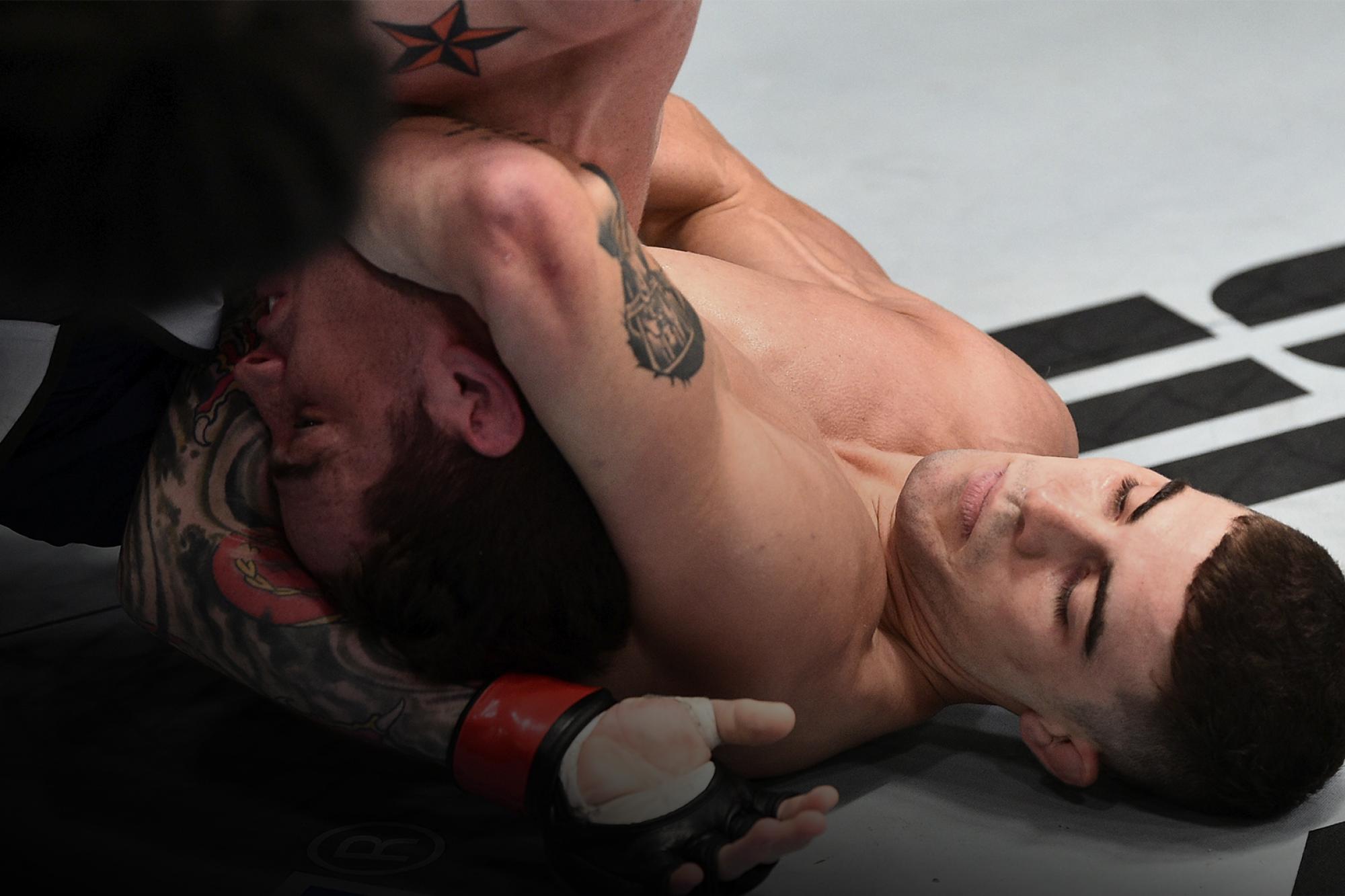 And in my mind I’m the underdog, so the perfect end to the next movie is that I get to go out there, beat a seasoned, well respected UFC veteran.
By Thomas Gerbasi, on Twitter: @TGerbasi • Nov. 22, 2019

The last time we checked in with Joe Solecki, he had just earned a UFC contract with a first-round submission win over Jesse James Wallace in July. For the North Carolina-based Jersey native, it was like a Hollywood story playing out in real time.

“This is what I’ve always wanted,” Solecki said. “Who doesn’t love their chance to write their movie and live their movie? And this is mine.”

Today, Solecki is deep into training camp for his Octagon debut against Matt Wiman on December 7. So, spoiler alert, what’s the sequel to this movie look like?

“I haven’t won in the UFC yet, so if that was the first movie, I earned my shot,” Solecki smiles. “But that’s not a UFC win and I didn’t beat a UFC fighter. Now, I get to go out there and fight a UFC vet. Who can’t get up for that kind of fight? And in my mind I’m the underdog, so the perfect end to the next movie is that I get to go out there, beat a seasoned, well respected UFC veteran, I get to look my wife in the face and let her know that I’m keeping my job and I’m climbing the ranks and we’re gonna have a great life. That’s my motivation this entire camp.”

There’s confidence in that statement from the 26-year-old lightweight prospect and you can hear it in his voice. He knows he belongs at this level, and he’s known it for a while. But knowing it in your head and showing it when your name is called are two different things. Solecki is well aware of this, and he knew that while a UFC debut was big, getting in position to have a UFC debut was even more stressful, and that’s what he was up against before the Wallace fight in Las Vegas.

“I know it’s a cliché that every fight’s your biggest fight, but really, my last fight was the biggest of my career until now because if I don’t win that fight, I’m completely back to square one,” he said. “I had my shot with the UFC and if I would have blown it and lost, I would have been back to the drawing board. I would probably have to go and get a real job for a while and really work my way back. I lost a lot of sleep getting ready for that fight and it’s no different for this. And maybe it’s a little more because I get to prove myself now.”

Knowing that he gets to prove himself at the highest level of the sport is a lot different than doing so in front of a small crowd that includes UFC President Dana White and matchmakers Sean Shelby and Mick Maynard. In a couple weeks, there will be thousands cheering when he makes the walk, and across from him will be someone who made his Octagon debut when Solecki was 12 years old. That’s some perspective when it comes to the experience edge Wiman has, but Solecki is determined not to let that be an issue on fight night.

“I get around it by fighting disciplined and composed,” he said. “If I was this hot head, young fighter who comes out and looks for a brawl, then experience comes into play a ton because he would take the composure out of me. But I think I’ve shown in most of my fights that I’m a pretty smart fighter and I’m pretty composed out there. The moment never gets to me, so if I do that and stay composed and disciplined, like I train to be, really all the experience means is that he’s had a lot more wear and tear, a lot more miles, a lot more ups and downs in this sport and I’m just getting started, so I’ll probably be even more excited to be there. I’m ready to go.”

Again, the confidence is evident, but it’s not cockiness, and there’s a difference. That will help Solecki deal with the inevitable jitters that come with this first UFC fight because in his mind, this is what he’s been aiming for since he first put the gloves on. So yeah, it wasn’t tough getting up again for this bout after the emotional high of the last one.

“Not at all,” Solecki said. “I look at the Contender Series and it was a great moment for me and we got a lot of exposure, especially because we got to be the main event and all that great stuff. But that was my job interview and now I have my dream job and I get to go to work. When I was a little kid, I wasn’t envisioning walking out in front of a hundred people at the Contender Series; I was dreaming about walking out in an arena like we’re gonna be in on December 7th, fighting in the UFC and fighting a UFC fighter. And I’m definitely fighting that opponent, I’m definitely in a huge arena, and I’m ready to show the world what I can do. So it’s not hard getting up for this at all.”

Let the cameras roll. Solecki, The Sequel, is about to begin.