Much has been made of UFC featherweight champion Alexander Volkanovski’s size back in his rugby days. But who is responsible for Volkanovski’s incredible transformation from 200 pounds rugby player to 145-pound world champ?

Ten years ago, Volkanovski and some of his rugby teammates walked into Freestyle Fighting Gym to get into shape for their upcoming season. That’s when Volkanovski met Joe Lopez, who helped Volkanovski shed the rugby weight and tap into his skill set as a mixed martial artist.

Lopez saw so much potential in Volkanovski that he even suggested that he travel to Thailand to compete for a scholarship at Tiger Muay Thai. Lopez wasn’t sure that Volkanovski would come back after going to Thailand and competing at a powerhouse camp with more high-level training partners.

But there was something about their relationship that made Volkanovski keep coming back to pick the brain of Lopez. 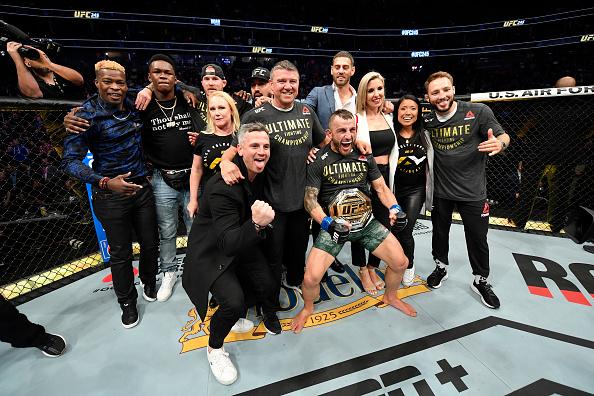 Alexander Volkanovski of Australia and his team celebrate during the UFC 245 event at T-Mobile Arena on December 14, 2019 in Las Vegas, Nevada. (Photo by Jeff Bottari/Zuffa LLC)

“I thought he was never going to come back to my little gym,” Lopez told UFC.com. “But every fight he would always come back and finish the camp with me. It was special. I thought he was going to be over at Tiger Muay Thai and they would have got him his fights, but he learned a lot of moves over there and I would help him execute them in his overall game.”

Volkanovski’s game turned out to be one of the best we’ve ever seen as he’s jumped out to a 22-1 record and took the UFC featherweight belt off the waist of longtime champion Max Holloway. The 32-year-old champ attributes a great deal of his success to the chemistry between him and Lopez and the way the two can be on the same page.

“You get a lot of ‘yes men’ in this business and Joe ain’t about that. He’s going to tell you what you need to do; he’s not going to beat around the bush, he’s going to get that s*** done and do it properly, and if it’s not good enough he’s going to let you know and make sure I do it better the next time.”

Volkanovski’s next opportunity to defend his featherweight strap comes at UFC 266 against Brian Ortega. The two were originally scheduled to throw down in March, but after Volkanovski tested positive for COVID, they ended up pushing the fight back and agreeing to be competing coaches on The Return of The Ultimate Fighter.

Fighters from Team Volkanovski, which featured coach Lopez and a mixture of coaches from Freestyle and Tiger Muay Thai, went on to win both the bantamweight and middleweight tournaments. Volkanovski was happy to best Ortega, backing up some of the verbal sparring the two engaged in during the show.

RELATED: Volkanovski Has His Eyes On Whole Division | Alexander Volkanovski Is Ready To Make A Statement | Volkanovski & Ortega Throw Down On SportsCenter | Coach Volkanovski 'Eager To Stir The Pot' On TUF 29

Volkanovski isn’t the type of guy to typically clash with an opponent, something about Ortega rubbed the Australian the wrong way and Lopez noticed.

“Maybe only one time in his career has Alex shown any malice toward any opponent. He always tries to be respectful, and not to mention that Alex is an easy-going guy,” Lopez said. “On the show he spoke to Brian to get some banter going, but Brain didn’t really take to that, and that kind of upset Alex and it was all downhill for Ortega from there. He took that a little personally.” 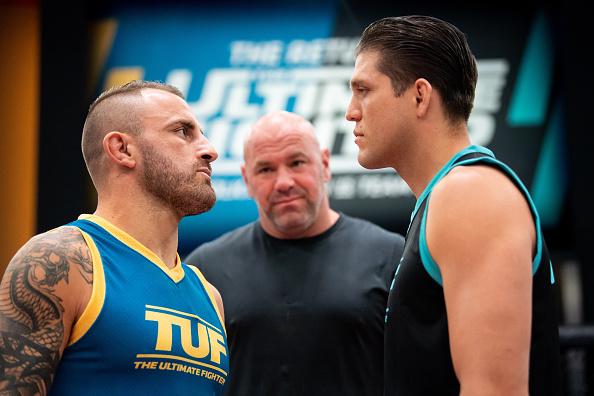 Alexander Volkanovski and Brian Ortega face off during the filming of The Return of The Ultimate Fighter at UFC APEX on May 20, 2021 in Las Vegas, Nevada. (Photo by Chris Unger/Zuffa LLC)

It’s hard not to notice that Lopez is chuckling as he talks about the rift between Volkanovski and Ortega. Lopez finds it genuinely entertaining that the two aren’t two peas in a pod, and he isn’t concerned that Volkanovski will let his emotions get the best of him at UFC 266.

Lopez does, however, think that Volkanovski’s dislike for Ortega will lead to a little more “intent” behind Volkanovski strikes.

“Alex is a grown man and he’s responsible and would never fight with his emotions. I don’t have to worry about him in that way. I think he’ll want to hurt him a little bit more and that’s just natural when you don’t really like someone,” Lopez said. “I think regardless of the show, these two guys wouldn’t have gotten along the best. Alex wanted Brian to play his game and Brian wouldn’t do it. He was too cool to do that. It was a personality clash, and we could see that right away.”

Having two lengthy training camps to prepare for Ortega adds to Lopez’s confidence in Volkanovski. He’s seen Volkanovski execute the structure they’ve come up with to perfection, believes his fighter has never looked better, and it’ll show when the cage door locks behind him.

“After doing the same thing two times in a row with Holloway we’re happy to face this new challenge in Ortega. That new challenge pushed Alex. His numbers are off the charts, his fight IQ has never been better, and everything is firing on all cylinders,” Lopez said. “Alex is beyond ready to make a statement.” 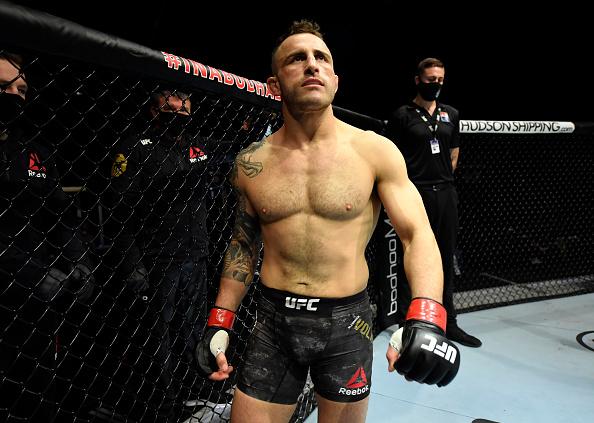 To Lopez, the reason he’s most excited for this fight is because he sees it as the perfect chance for Volkanovski to earn the respect that the champ deserves. He feels that people aren’t giving him the props he should be getting after beating Holloway twice and running through the best at 145 pounds to get to the top of the division.

“People don’t give Alex enough respect. People are always going to judge you on your last fight and unfortunately that’s the way it works,” Lopez said. “It’s all about success and if people want to judge fighters based off that then people should love Alex but, anyway, if he goes out there and KOs Ortega everyone is going to jump on his bandwagon.”

“Honestly, I think that Alex will go out there and put a clinic on him.”

Don’t miss UFC 266: Volkanovski vs Ortega live on PPV to see Volkanovski attempt to defend his UFC featherweight title for a second time.