"I’m going to turn this fight into a brawl, which Mac isn’t going to
like, and I’m going to put myself back on the right track in the
lightweight division." - Joe Lauzon 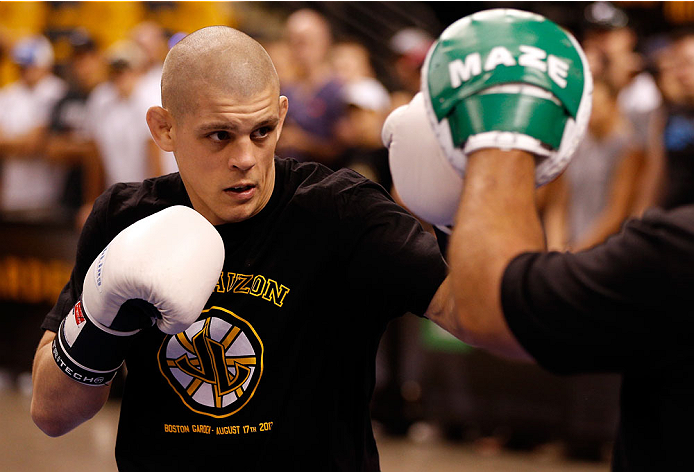 The distractions are real when it comes to making an impact at the higher levels of the UFC.  And as the man who sits atop the all-time post-fight bonus list (with Anderson Silva), Joe Lauzon found that out the hard way, as the only thing most people wanted to talk about leading up to his August loss to Michael Johnson was that very topic of bonuses.

“This fight, I’m not going to let things cloud my vision and stay focused,” said Lauzon, who meets Mac Danzig in the UFC on FOX 9 main card opener this Saturday. “I felt like last fight camp that all the talk was geared toward bonuses. I’m coming off two losses and it’s a crappy spot to be in, but it’s reality. I’m not even thinking about the bonuses this time around because there was way too much talk about me getting one. It kind of got me into trouble a bit. It’s not like I set out to get a bonus, I just go out to fight.”

Indeed Lauzon goes out to fight, with his 9-6 Octagon record seeing him end all his victories by KO or submission. Add in his 12 bonuses, and the pressure to always deliver a memorable performance is something that truly exists, whether it’s from the fans wanting to see exciting fights or UFC President Dana White wanting to see the very best out of each and every one of his fighters.

“Every time you enter that Octagon there’s always somebody looking to take your job, and it’s my duty to continue to show my qualifications,” said Lauzon. “Getting Fight of the Night sometimes sucks because both guys are getting beat up quite a bit. But again, bonuses are something that you earn and are not given. I always look to put on an exciting fight and it doesn’t bother me when they attack me on social media when things don’t go my way. I’m focused on going out and just winning.”

After defeating Kyle Bradley and Jeremy Stephens in succession and going 5-1 in a 2006-2009 run, there was a lot of talk of Lauzon becoming a title contender. However, that run was cut short with a unanimous decision loss against Sam Stout at UFC 108 in January of 2010. Again, the guessing game began and second thoughts crept in.

“Of course I was disappointed with that loss against Stout”, Lauzon said. “I was really close to that title shot and it slipped out of my hands. But that was then, this is now. My focus right now is Mac Danzig and only him. I would like to put a nice string of wins together but it starts with Mac. 100 percent him and I don’t care what anybody else is doing, it’s all about him.

With Danzig, he faces a fighter who is also coming off two consecutive defeats, even though the former TUF winner’s last fight ended in brutal fashion with a knockout to Melvin Guillard. Regardless, the skills of Danzig aren’t something to be overlooked.

“Mac is a very powerful fighter and has shown that in many of his fights,” said Lauzon. “Look at his fight against Joe Stevenson; he did the same thing with a big knockout. I don’t take away anything from him because he lost his two fights. I’ve lost my last two as well, so it makes me a bad fighter? He’s also been around for such a long time, so he knows a thing or two about the Octagon. He came up through the Ultimate Fighter like myself, so there’s a lot of similarities between us.”

Comparisons between the two fighters will be made to build up the fight, likely focusing on who could be on the chopping block with that gut wrenching third straight loss. Yet while the fans try to build up some back story and manufacture a feud, the animosity between the combatants simply does not exist.

“We’ve been texting each other the last few weeks regarding Mac computers,” Lauzon said.” I have tons of respect for him and what he has done in the UFC. He loves photography and I love computers so we’ve been bouncing ideas off of each other. I mean I’ve never hung out with him before, but it’s more of a mutual respect kind of thing. We are both professionals and both are going to look to kill each other on Saturday.”

With the mind being such a fragile part of the body, Lauzon is pushing through any type of negatives that are trying to alter his game plan. But with his mind finally in the right place, Saturday is only a blink of an eye away.

“We are both going to go out there swinging and we are both well-rounded. I’m going to come out and be aggressive, as I think Danzig likes to have a slower, more calculated fight. I’m going to turn this fight into a brawl, which Mac isn’t going to like, and I’m going to put myself back on the right track in the lightweight division.”