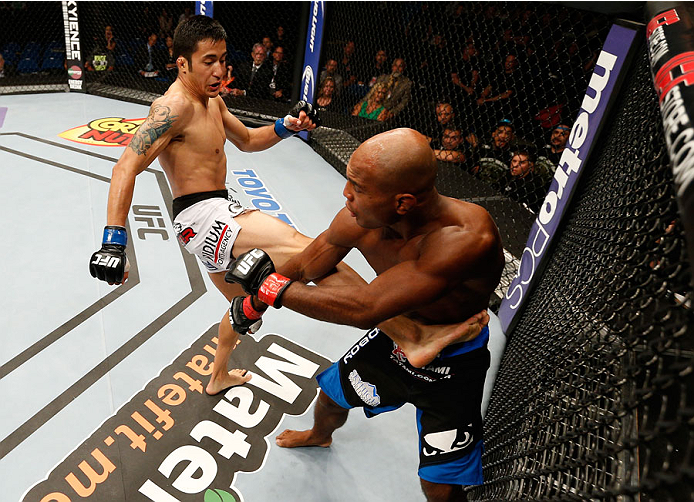 If you ever want to know about the highs and lows of life as a professional fighter, all you need to do is look back at the 16-day stretch Joby Sanchez experienced this past summer.

On August 7, the 23-year-old picked up a second-round stoppage victory over UFC and WEC veteran Antonio Banuelos to push his record to 6-0. A day later, it was announced that he would be fighting for the Resurrection Fighting Alliance flyweight title. While winning gold under the RFA banner has proven to be a launching pad to the UFC over the last year, Sanchez didn’t even need to fight for the belt, as less than a week later, the Team Jackson-Winkeljohn fighter had signed on to make his Octagon debut.

An injury to Timothy Elliott left Wilson Reis needing an opponent and Sanchez stepped up, facing the Jiu-Jitsu standout in the opening bout of UFC Fight Night: Henderson vs. dos Anjos on August 23 in Tulsa, Oklahoma.

After losing the first round, Sanchez found success early in the second, connecting with a stiff left hook that shook Reis before putting him on the deck with a right high kick less than a minute into the middle frame. As the Brazilian searched for a takedown and some time to shake out the cobwebs, Sanchez looked for the finish, but it never materialized.

Reis would get to his feet, regain his composure and spend the remainder of the fight attacking with takedowns, putting the UFC newcomer on the defensive. When the final horn sounded and the scores were tallied, Reis picked up a unanimous decision win and Sanchez was hit with the first loss of his professional career.

“It hurt,” Sanchez admits, the sting of defeat still evident in his voice. “I hadn’t lost as a pro, I felt very confident in myself going into the fight and I don’t want say it was UFC jitters because I wasn’t nervous. I was excited to get into the UFC, I was excited and ready for the fight, I just came off a big win knocking out Antonio Banuelos, but I lost.”

Accomplishing one of your dreams and then suffering the agony of defeat all in less than three weeks can take a toll on a fighter, but the real key is how that fighter responds, and heading into his sophomore appearance, Sanchez seems to have navigated his way through the peaks and valleys of August and emerged a better man because of it.

“It hurt, but it made me get back and train even harder. There’s a lot of good that came out of the fight,” Sanchez, who returns to the Octagon opposite Team Sityodtong’s Tateki Matsuda in the opening bout of next weekend’s UFC Fight Night: McGregor vs. Siver event at the TD Garden, says.

“After the fight I was upset, but I said, ‘Okay, I can compete with these guys.’ I re-watched the fight and I said, ‘I could have beaten him.’ Not to take anything away from Wilson Reis – he’s on a good roll, just beating Scott Jorgensen – but I looked real stiff in that fight and I believe I’ll have my day again to face Wilson Reis and get that loss off my record.”

While avenging his loss to Reis is a goal for the future, Sanchez’ current focus is getting back into the win column when he faces off with Matsuda. Like Sanchez, the 28-year-old Mark DellaGrotte student made his promotional debut on short notice, coming out on the wrong side of the scorecards in a bantamweight tussle with Chris Beal in early September.

Being based out of Boston, Matsuda will have the home field advantage in this one, but Sanchez isn’t concerned in the least. Instead he’s opting to focus on the momentum he gained coming out of his debut and the added positives that come with having ample time to prepare for a fight with one of the best teams in the sport.

“Being in an environment like this is rough,” he says of working with the cast of contenders and champions that call the Jackson-Winkeljohn facility in Albuquerque, New Mexico home. “I haven’t even been at Jackson’s for a full year yet; January 14 will be exactly one year. It was rough at first because I got there from a small gym and I felt how hungry guys were – that I’m not the only one wanting this dream. It scares you at first, but it really pushes you.

“It’s nice having a full camp too,” Sanchez adds with a laugh. “I’ve always worked with Coach Greg, but now to see him really break down a fighter – his strengths and his weaknesses – is awesome to see. I’m working on things not only to improve on my game, but also to execute in the fight against Tateki and his style.

If August was a whirlwind of emotions and nerves – the highs and lows of life as a fighter compressed into three weeks that went by like it was three days – Sanchez promises that his sophomore effort will be a much more accurate representation of who he is and what he can do.

“I know what to expect now,” he says flatly. “I’m already in the UFC, I’ve already got that mental obstacle out of the way, so now I’m just here to fight, win and get paid. Tateki’s a tough fighter. He’s never been finished, so expect a fast-paced fight, but expect a huge speed difference. I don’t think he’s ever been in there with a fighter as fast as me.”