Jimi Manuwa: No Time to Waste 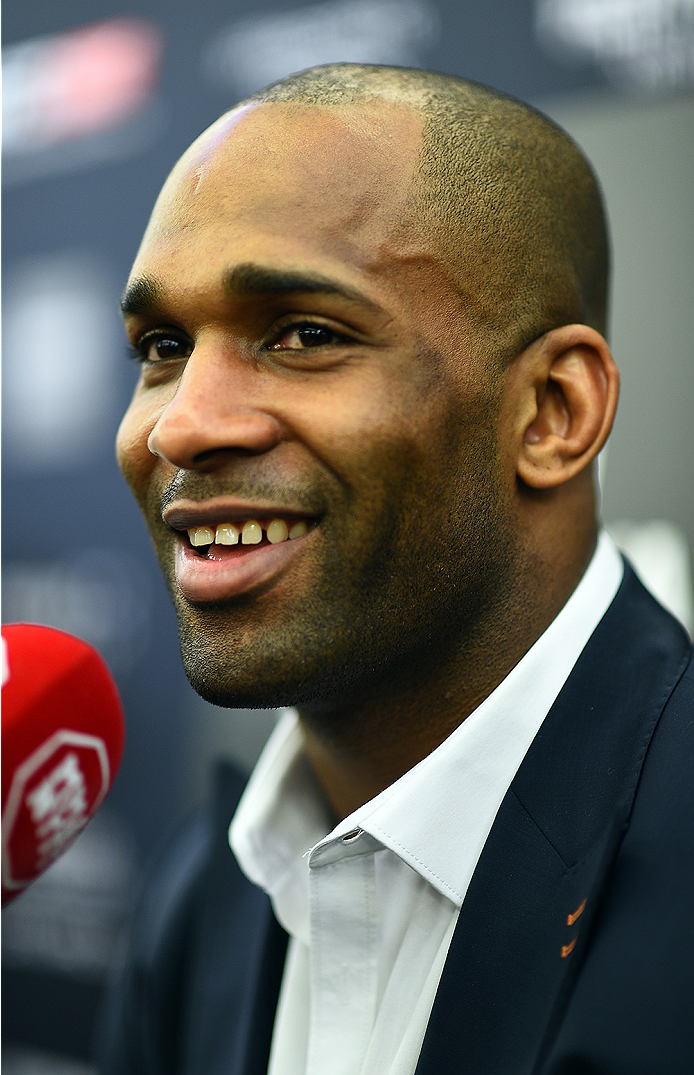 Jimi Manuwa isn’t going to lie. He watched Ovince Saint Preux stop Mauricio “Shogun” Rua in 34 seconds last November and thought to himself, that would have been a nice poster for the collection of the “Poster Boy.”

“Of course,” he said. “I knew I would beat Shogun, and I felt in the best shape of my life and I was thinking there’s not any way he can beat me.”

A win over the former UFC light heavyweight champion would have been the biggest of Manuwa’s career, but it wasn’t meant to be, as he was forced out of the bout with the Brazilian star a little over a week before the opening bell.

“I was fully confident for that fight, but leading up to that, I couldn’t kick, I couldn’t really run, and I couldn’t figure out why,” he said. “My foot was a bit swollen, but I didn’t remember kicking anything. It was a total mystery, and when I came back to London (from Sweden), it was hurting so bad I got an MRI scan and it showed a stress fracture. They said the foot was literally days from breaking. And kicking’s one of my things, so to go into such a high-profile fight against Shogun without one of my main tools, it didn’t make sense.”

So it was off to the sidelines for the Londoner until his foot healed, and though the high-profile main event was gone, once he was cleared to return, he got a high-profile co-main event against Poland’s Jan Blachowicz this Saturday. And like many fighters with the old school attitude Manuwa possesses, it really isn’t Blachowicz he’s facing in Krakow, but just another face.

“He’s got his good and bad points just like any other fighter,” said the Brit. “All you have to do is just watch his fights to get what he’s good at and what he likes to do. Like any other fight, I don’t really have a game plan – I’ve got dos and don’ts for the fight and that’s it.”

That means any psychological aspects of the fight, like Manuwa having more UFC and big fight experience or Blachowicz having the home advantage fighting in Poland really doesn’t matter to the visiting fighter this weekend. Of course he’ll take any advantages he can get, but he isn’t counting on any of them.

“I don’t know what type of person he is, so I don’t know if that gives me any advantage,” he said. “I don’t really look at the psychological stuff like that. But I learned a lot from my last fight being the main event. I was trying to pace myself, which is not the way I fight, and I think that cost me the fight. All that could be an advantage, but I’m not relying on that.”

That last main event against Alexander Gustafsson in March of 2014 saw Manuwa suffer defeat for the first time as a pro. It wasn’t a blowout loss, as the two earned Fight of the Night honors, but it was a loss nonetheless, and it’s a feeling the 35-year-old doesn’t want to experience again. He even spent nearly a month training with Team Gustafsson in Sweden leading up to this weekend’s fight.

“We trained before we actually fought, and then the fight came up,” Manuwa said. “The link-up came through Alliance MMA, where we both trained. And I know he’s a great fighter, but we had to fight each other first. We said we’ll get the fight out of the way, and then we’ll start training together. That’s was it. The coaches, the whole set-up there is perfect for me, and the level of the training partners is perfect as well.”

Most importantly though, in Sweden, Manuwa isn’t the captain of his own ship, and that regimented training at the Allstars Training Center is something he appreciates.

“Over here in London, I don’t train myself, but I set my own schedule of what I’m gonna do for my training,” he said. “I haven’t got people telling me do this and do that. I’ve got good trainers, but I set my own schedule. Out there, it’s totally different. They tell you what you’re doing, what time you’re doing it and I think I need that. Here, I can say I’m not going to train today or I’ll be late for training. Nobody’s telling me what to do. But they’ve got a good team structure out there.”

That structure has produced a solid training camp for Manuwa and more than a year outside the Octagon has made him hungrier than he’s ever been. So he’s not too worried about being the bad guy for Blachowicz’ homecoming bout.

“A fight’s a fight for me,” he said. “It doesn’t matter where I am. I’m hard-headed, I’ve got good willpower and I’ve been through a lot, so a few boos ain’t gonna change the way I fight. It’s going to be me and him in the cage, and nothing’s gonna change. I’m still going to be the aggressive striker, TKO / knockout artist that everyone’s seen.”

And with plenty of momentum to regain, Manuwa hopes this win kicks off the biggest year of his UFC career thus far, both literally and figuratively.

“I want it to be very busy,” he said. “I want to fight at least three times this year, starting with April. I want to fight in the summer and I want to fight late in the year as well. I’ve got no time to waste. I feel I’m at that level and I feel like I’ve got all the skills to get to the top.”