“(Back then) The guys were more prepared for a war. Today, we’re smarter and more professional and we prepare for a fight." - Ivan Menjivar 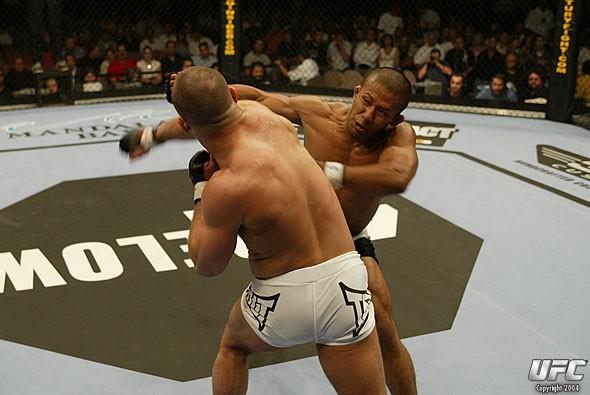 If you ever get to chatting with Ivan Menjivar about the fight game, you won’t hear him talking about world titles, television appearances, or action figures bearing his likeness. Instead, if he had one mixed martial arts wish, the ten year vet has a simple request.

He laughs, knowing as the words come out of his mouth that it’s practically an impossibility these days, but still getting excited at the thought of revisiting the one night tournaments that used to be commonplace in the early days of the UFC.

“You know your first opponent,” he speculates. “If you win, you have to recover and prepare for the second opponent, and after the third opponent in the finals, that’s crazy. There, you can say this guy is the fighter of the night. There you can see a real martial artist.”

That’s an old school mentality in its purest form, and you don’t get more old school than the 28 year old Menjivar, a bantamweight whose dance card over the last decade has included featherweights like Urijah Faber, lightweights like Matt Serra, Caol Uno, Joe Lauzon, and Bart Palaszewski, and a pretty fair welterweight named Georges St-Pierre.

The fact alone that Menjivar, 4-0 at the time, fought the debuting St-Pierre in 2002 is mind boggling, but the native of La Paz, El Salvador downplays any significance of his first round TKO defeat (a controversial one due to a poor referee stoppage) beyond the fact that the two eventually became friends and training partners after the bout.

“Georges was a beginner at that time, and so was I, so it was normal,” said Menjivar. “We were living in the same city, so it was normal for us to fight together. After that fight, we started training together and got close and became good friends. I’m happy for him – he’s now a superstar and so popular, and that’s good.”

Menjivar’s journey was quite different. Fighting naturally bigger opponents on a regular basis, he never shied away from a challenge, even with the odds stacked against him. That was the price you paid at that point, with the WEC not yet reaching the powerhouse level it eventually got to, and the UFC then cutting things off at 155 pounds. Menjivar fought once in the Octagon, losing a three round decision to eventual welterweight champion Matt Serra at UFC 48 in June of 2004, but that was it. And while wins over Lauzon and Hideo Tokoro kept his name in front of fight fans, following back-to-back losses against Uno and Palasewski in 2006, he walked away, ready to heal his injuries and consider the next chapter of his life. He has no regrets for his ‘anyone, anywhere’ attitude toward the sport, but he does realize that things are different now.

“First of all, I’m a martial artist so I do this for me,” he explains. “Martial artists are made to defend ourselves and prove that we have good technique. Second, there was the challenge – the guys are a little bit bigger, so I took a chance and said let’s do it. Third now, my vision’s changed a little bit because the sport has grown up so much. It’s not the same. In the beginning, ten years ago, everybody can fight everybody, but now we see the difference – we’re professionals and we have to study each other before we say yes to a fight. I want to fight anybody, but we’re professionals now, just like Formula 1 drivers. You have to study the car and you have to study the driver before you go there. It’s the same for us and that’s what I do now.”

By 2010, the 28 year old Montreal resident decided to take another shot at the fight game, and after he scored a first round submission win over Aaron Miller in June of last year, he got the call to the WEC, where he lost an exciting and close decision to Brad Pickett last December. It was a new Ivan Menjivar in a new fighting world. So does he ever miss the old days?

“(Back then) The guys were more prepared for a war,” he said. “Today, we’re smarter and more professional and we prepare for a fight. But guys want to win and not take too many chances.”

Playing it safe is something Menjivar will never be accused of, and it’s the same for his opponent this Saturday at UFC 129, fellow veteran Charlie Valencia. For diehard fight fans, this could very well be a bout that steals the show, and as far as Menjivar is concerned that’s the goal each and every time out.

“I took a break for three years, and in that three years the sport grew up so fast,” he said. “For me, I just need to prove who I am in the sport. We have to make the people happy and I need to prove myself so that way they can remember me, and that’s my goal for this fight. The sport is like my second passion. It’s my family first, and after that it’s the sport. After my injury, I think to myself, each fight, I give one hundred percent because this may be my last fight.”

So whether he’s fighting in front of 500 people or 55,000, like he will on Saturday, it’s all the same; he’s going to fight with everything he has in search of victory.

“I don’t think about the people,” said Menjivar. “I’ll be honest, I appreciate that they will be there and I’m happy to fight with all those people around me. But at that moment, as an athlete, I’m only thinking about the fight. After the fight, if I say hello to everybody and can give a hug to everybody in the place, I’m happy with that.”

A hug for everyone in Rogers Centre? That could take a while, but that’s just fine with Ivan Menjivar.