Inside The Irish Invasion - Part 3 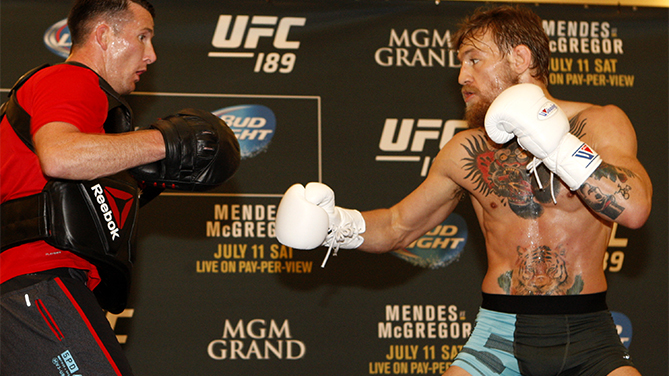 At about 8 a.m. on Wednesday morning a crew is busy building a stage that will host UFC Tonight. The show is set to take place after the public workouts that will begin over four hours later. Already, dotted around the entrance to the workouts, there are Irish flags and sunburnt faces, all eager to get a good vantage point for the arrival of "The Notorious."

The very mention of Chad Mendes’s name by Megan Olivi forces an eruption of boos from the gathering after they entered the venue. When Mendes appears, a mixture of cheers and jeers greet the Team Alpha Male fighter.

RELATED CONTENT: Inside The Irish Invasion - Part 1 -- Part 2 | Open Workouts Recap | McGregor Will Intimidate, Infuriate, Dominate. All At Once

Mendes and Urijah Faber put on a grappling exhibition for the masses, accentuating the wrestling prowess of ‘Money.' He takes Faber down on multiple occasions and when ‘The California Kid’ gets back to his feet for the umpteenth time, he holds his hands up and runs away. It is a physical representation of a theory many hold – “Conor McGregor doesn’t want any of Mendes’s wrestling.” 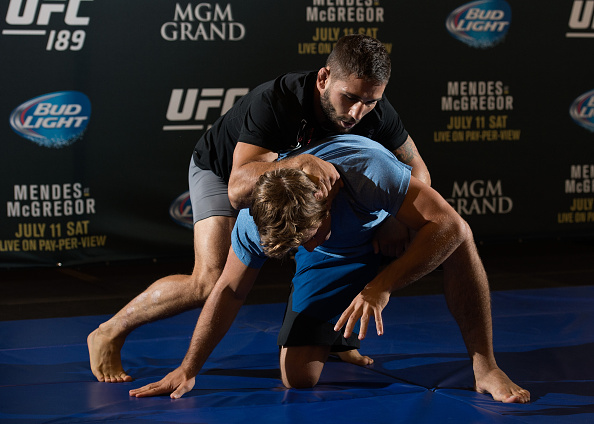 When the boxing gloves come out, Mendes showcases his signature, powerful overhand right. As the session ends, he mimics the donnybrook style of McGregor’s striking stance, and again, the Irish vocalize their disdain for the American.

McGregor’s arrival to the event sends the crowd into hysterics. Breaking procedure, instead of going straight to the stage, the Irish featherweight went straight to the Irish assembly to thank them for coming out. On his entrance to the stage he holds his hands aloft – seeing that his faithful fans have made it to the MGM Grand is cause enough for celebration. After some stretching he reveals a T-shirt with ‘King’ emblazed on it – fitting attire in the presence of his loyal subjects.

Owen Roddy goes through a variety of combinations with his teammate. McGregor throws the bolo uppercut that sent Marcus Brimage to the canvas in his UFC debut, the spinning back kick that he first revealed against Max Holloway and the signature “left hand straight down the pipe” that brought an end to Diego Brandao’s night in front of his hometown crowd.

Then Artem Lobov cuts in to take the dance from Roddy. A showcase of kicking techniques follows as the Irish crowd watch on in awe. McGregor’s movements are spontaneous and graceful, it’s a performance – a devastating ballet.

Finally, Sergey Pikulskiy, the Dubliner’s wrestling coach, comes in to show another aspect of his game. McGregor shows both his offensive and defensive wrestling capabilities. There is no real intensity to the exhibition, but there is undoubtedly a considerable skillset present. We will only find out how effective it is on Saturday night. 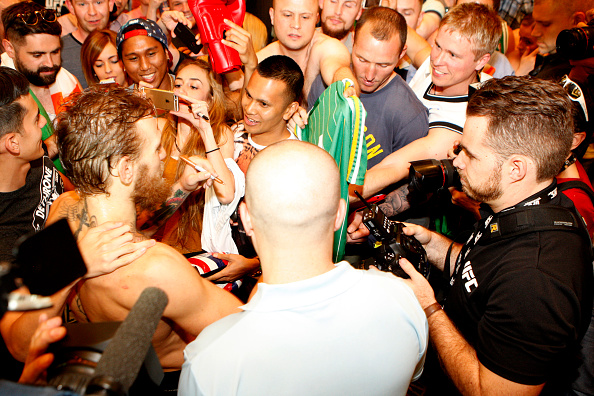 After the hour-long workout McGregor runs to his fans again as the room explodes with excitement. They desperately reach out to try and touch their hero. The gathering media are waiting for the Irish featherweight to field some questions, but he only graces them with his presence after signing every autograph that is requested of him.

“It was packed to the rafters and this is only Wednesday,” he tells them. “I think it’s going to just keep raining in. There will be green, white and orange everywhere. It will be a historic night for the Irish and I’m enjoying every second of it.”

The news of Irish atomweight Catherine Costigan’s successful weigh in begins to do the rounds after the workouts finish. She will give the Irish lungs their first test tomorrow night in the Cosmopolitan when she faces Amanda Brown at Invicta 13.

After the event UFC Tonight films on the stage that had been set up that morning. McGregor surprises the live studio audience, again made up of a lot of his countrymen, and almost immediately they reach fever pitch. After the open workout they are more convinced than ever that he can get the job done against Chad Mendes. And with their help and their energy, he is more motivated than ever to do it.