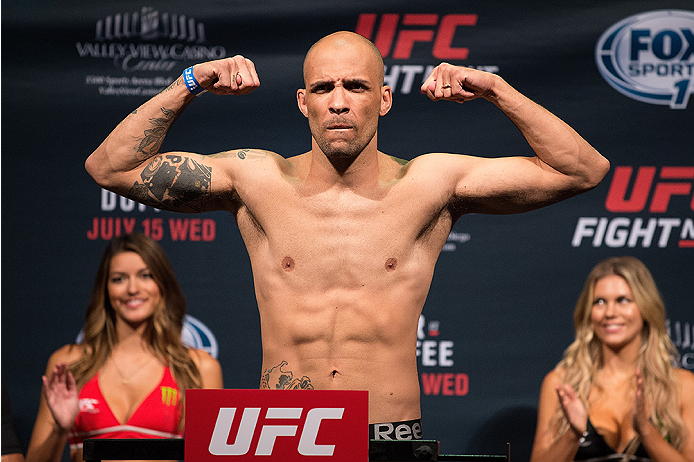 Igor Araujo had finally reached his breaking point. He put on a brave face, fought because he thought it was what his wife wanted him to do, but after a loss to George Sullivan last September, his third bout since Mariana was diagnosed with cancer, he decided that he had a more important fight to win back at home.

“I did this (fighting) with my heart, crying every day, and it was really bad,” Araujo said. “I couldn’t perform well. The doctors told me, and I always had it in my head, that if I stopped fighting, she would feel worse because she knows that I love to fight. That’s why I kept fighting, but after the last fight, I told her ‘hey, I’m going to be with you to take care of our kids, and no matter what, I’ll be with you.’”

Mariana Araujo was waging the fight of her life before her husband even stepped into the Octagon for the first time in October of 2013, rendering a man competing in one of the toughest sports in the world helpless.

“When I got my first fight in the UFC, she went to the doctor for her exam and they saw thyroid cancer,” he recalled. “Then it went into the brain and the bones, and I was fighting, but I wasn’t one hundred percent focused on the fights. I was really bad, crying, worried about losing my wife.”

The couple also has three children, adding to the stress level as Araujo wondered what would happen if they lost their mother. At her insistence, he continued to train, and he continued to win, decisioning Ildemar Alcantara and Danny Mitchell to push his winning streak to six.

“Before my fights I always thought about her,” he said. “I was training hard, but it was hard to get focused.”

Then came the fight against Sullivan, and to add to his woes, Araujo broke his rib six days before the bout. He was advised by his team to withdraw from the bout, but he insisted on going through with it. Sullivan won by knockout in the second round.

“It was not the best performance that I had,” he said. “George Sullivan was better than me that night, but the next fight I will show myself what I can do. If I do that, the people will see, but I’m going there to prove to myself that I can fight better than I have been fighting.”

That next fight is on Wednesday against Sean Strickland. It’s his first bout in ten months, and just by him being back in action, it’s a welcome sign that things are going well for Mariana.

“She’s better now, she did all the treatment, they removed almost all the tumors that she had, and now it’s time to get back to business,” Araujo beamed. “The tumor she had in the brain disappeared because of the treatment and she had surgery to remove part of her femur, because she had a tumor there too, so they put titanium there. The last one was in the vertebra, and she did radiation therapy and the doctor said everything was good, so we’re just waiting for the results, but I have faith in God that everything passed. The doctors said we are close to the finish line, and now I’m happy. I’ll be fighting as the happy person that I always was then.”

You can hear it in his voice. As Araujo conducted this interview while driving back to his place in his training home of Albuquerque, he wasn’t going home to feel what he had been feeling before his previous UFC fights. This time, his wife and kids were waiting for him, as he spent the money to bring them out for his training camp and to have everyone together.

“I need them with me,” he said. “I’m trying to put the two things together – fighting and family. My head’s really good now, it’s not like before, and I’ll put everything into this I can to perform well.”

As odd as it is to say, the fight with Strickland almost doesn’t matter at this point, because a bigger fight has been won. And Igor Araujo couldn’t be happier.