Ian McCall - An "Uncle Creepy" You Can Love

"I think I'm going to outperform myself from the last time and show the world that I'm here to do something great. I don't just want to be champion. I want to be a feared person in this sport." - Ian McCall 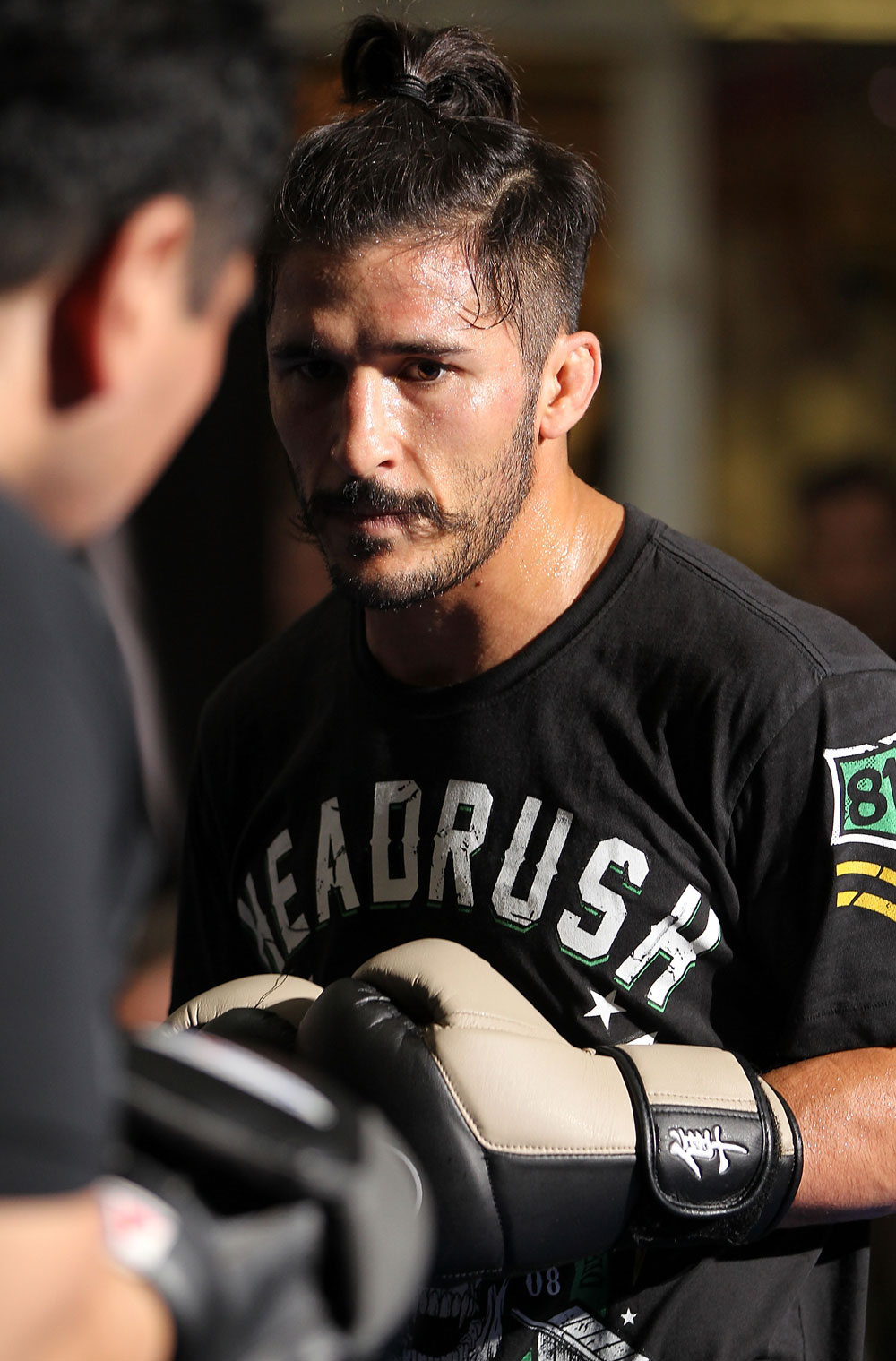 “I'm the best 125 pound fighter in the world and I'm just trying to make people fall in love with me.” - Ian “Uncle Creepy” McCall

An incredibly odd draw result may have initially robbed Ian McCall of proving the former, but the 15 minutes of frenzied mayhem preceding the decision certainly earned “Uncle Creepy” many new fans and a possible crush or two.

On March 3rd, on the other side of the planet in Sydney, Australia, the UFC debuted a new weight division, flyweight, and its uncrowned, mustachioed king, McCall, in a three round Fight of the Night war against former bantamweight top contender Demetrious “Mighty Mouse” Johnson. For the UFC faithful’s first taste of flyweight fisticuffs, Johnson and McCall traded fists, feet, and takedowns in what looked like fast-forward action for 15 minutes. It lived up to the hype, it solidified the addition of this new division if only just for the existence of this fight, and it introduced Octagon enthusiasts to McCall’s most hilarious nickname and unbridled, entertaining fury in the cage.

But there was one minor hiccup.

As this bout was part of a mini-tournament to decide the first UFC flyweight champion, a stipulation was added that if the judges’ decision was a draw, then there would be a sudden death fourth round. As luck would have it, the judges’ outcome was a draw, but due to a clerical mistake transcribing the scores, the decision was wrongly read in favor of Johnson. This error was discovered after the fighters were already backstage and done for the night.

Thus, no fourth round. Thus, a main event rematch set for June 8th, live on FX. Thus, McCall is champing at the bit to prove once again why he believes he’s the greatest flyweight in the world.

“I have been busting my ass and it's driving me [expletive] crazy,” exclaims McCall. “I'm going insane. I have had to move out of my house. My wife said, 'OK, you're out. Go move in with your strength and conditioning coach. Just get this done.' She's all for it and she's very supportive. She knows I need to just clear my head, stay away, be alone, and just get this done. Once the day comes, my job will be done.”

It’s tough to tell what has the 28-year old Californian more riled up: thinking he won the fight outright or that he thinks he would have won that final tie-breaking round. The opening five minutes featured tussling of both the standup and the ground variety, including McCall scoring two takedowns to Johnson’s none. The second round was a striking duel, with neither successful in their takedown attempts and “Mighty Mouse” landing a little more on the feet. The final frame was undoubtedly for “Uncle Creepy”, which was highlighted in the final minute by McCall ground and pounding Johnson from mount while wildly screaming and gesticulating to the cheering Aussie crowd.

“I know that I would've finished the fight in that fourth round,” asserts McCall. “I think everyone knows that. The momentum swing was very much in my favor. It was all downhill for him. I felt him wilt underneath those shots I was putting on him on the ground. It still bothers me. It has been bothering me ever since. I have had this nagging thing in the back of my head that has been eating away at me that's been driving me [expletive] crazy. It's unfinished business. I don't like to leave things unfinished. I'm a perfectionist and it's driving me nuts. I just want to get this over with.”

Admittedly, McCall has watched the frustrating fight with Johnson a couple times, but ultimately has resigned from further viewings. The men in McCall’s camp that have agonized over the video tape to pick apart the memorable organizational debut are his coaches from Team Oyama in Irvine, California. The dynamic duo specifically instructing McCall is Muay Thai specialist Colin Oyama and third degree BJJ black belt Giva Santana. They are the architects who McCall looks to lead him to a decisive victory over “Mighty Mouse” and improving his overall 11-2-1 record.

“I don't bother watching it much because the more I watch it the more it pisses me off and the more I realize I won,” states McCall. “I leave it to my coaches to watch. They are my coaches for a reason and I have faith in them. They put together the gameplan to make sure I can finish the fight and put my stamp on it more or less. It being physically possible, it is hard to prepare any harder than I did for the last one, so it comes down to gameplan. The gameplan has changed, not by much, but now I know exactly what to do. I need to beat him up. I can't get into this long distance, jogging match with him. I have to get into his face and take him into uncomfortable positions like I did in the third round.”

If there’s a positive to take away from the previous 15 minutes of hands-on experience fighting Johnson, minus the bonus check, it would be McCall’s wrestling. “Uncle Creepy” is lukewarm to disappointed in his striking in the first outing, but he did score several takedowns, passed Johnson’s guard several times, and showed an advantage on the ground. It was a very rare sight to see the highly regarded 14-2-1 Johnson mounted, taking punches, and bleeding from the mouth in the final seconds of the third round. It’s an area that the Washington resident will no doubt address in his training camp, but McCall is not resting on his own wrestling laurels.

“Obviously, the takedowns got into his head, and not only that, but the punishment he was taking when I got on top of him,” says McCall. “I got a little over-zealous in the beginning and he swept me, but he wasn't able to hold me down. I have to take him down, be patient, and deliver some punishment when I'm there. I definitely know that is in his head. I know that he knows I'm the far superior wrestler, the far superior grappler. I know it's uncomfortable being underneath me (laughs). I hurt everyone that I get on top of. He'll definitely be watching out for that. People always say to me, 'what if he works on his wrestling?' Great! Good for him. Do you think I'm going to stop doing what I do best? I'm a good wrestler. I'm still wrestling just as much if not more than I was before. My wrestling has gotten better since that last fight. I haven't stopped working.”

To prepare for the first rematch of his career, McCall is training at Team Oyama with Oyama, Santana, and other fighters like K-1 kickboxer Romie Adanza. He can also be found grinding on the mats at the California Republic Academy of Wrestling with the Holiday brothers, Sheldon Kim, and John Azevedo. Last but not least, as mentioned, McCall is living with his friend, mentor, and strength & conditioning coach Corey Beasley of Innovative Results. For him, it is these men in the gym and especially two women (McCall’s wife Shay and daughter London) outside of it that fuel McCall’s confidence in this rematch with Johnson and towards his goal of being a star and eventual title holder in the UFC.

“Now, I completely proved to myself what I thought all along, which is that I could beat him,” tells McCall. “I think he's shown me everything he has to offer. I think he put on the best performance he could against me and I know I didn't. I know I didn't fire off my hands and my kicks the way I should have. Coming into this one, I think I'm going to outperform myself from the last time and show the world that I'm here to do something great. I don't just want to be champion. I want to be a feared person in this sport. I want people to really respect me.”

If there are still UFC fans undecided on whether to root for the Fight of the Night winning, heavily tattooed, Rollie Fingers mustached, oil black pompadour sporting, reformed partier, proud father and husband, Chihuahua owning, 125 pound cagefighter with the unforgettably catchy “Uncle Creepy” moniker, then just know McCall steps into the Octagon looking for a fist fight, with whoever is unfortunate enough to be in there with him, all for you. And he couldn’t be happier to do it.

“I should've been here all along,” affirms McCall. “I blew my WEC appearance. I ruined that because of the demons I had. Being in the UFC, it’s exciting. My first fight I got to be on the main card and got to be in the first flyweight fight in company history. This time I get to be in the first flyweight headliner. All this excites me. It gets me going. I don't get the Octagon jitters. I'm not afraid to perform. I get off on it. This is something I love to do. I was ranked #1 in the world for a reason. I have this cult following for a reason. They enjoy the violence that I show them. I leave it all out there and put it all on my sleeve and give it all that you want. I just want to make people happy. I'm just trying to do my job. You're the sick twisted people who want to see me hurt someone for money (laughs).”

On Friday in Sunrise, Florida, this Californian will settle the score with “Mighty Mouse” in a hotly anticipated flyweight rematch. “I think they've created a monster,” says McCall, who knows his first fight in the UFC put the division on the map, stole the show in March, and made room in all fight fans’ hearts for the flyweights and, especially, “Uncle Creepy.” “We're only going to get better. I think we're going to take over. I think I'm going to take over.”