Ian McCall and The Warrior Way

"My life is pretty awesome and simple at this point." - Ian McCall 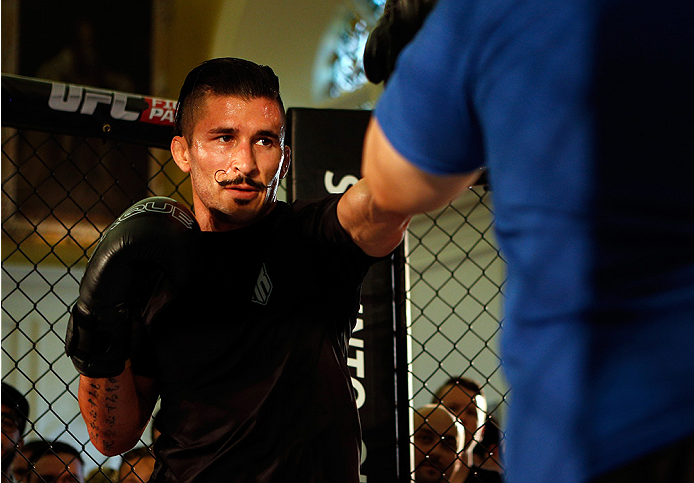 Ian McCall's life has been a bit of a rollercoaster. Okay, a lot of a rollercoaster. When I first interviewed him before his UFC debut with Demetrious Johnson, Ian told me all about his misspent youth and wasted opportunities in the WEC. It was a dark tale of literally coming back from the dead and getting his life in order, and all was looking up for the then-number one ranked flyweight in the world.

Of course, that fight (one many feel he should have won) was ruled a draw after an error tabulating the scorecards that wound up costing him the opportunity for a fourth "sudden victory" round. By the time the rematch with DJ took place, McCall was dealing with problems at home that eventually led to a messy divorce and custody battle. There were also legal problems and injuries plaguing him along the way. Needless to say, it's not an ideal situation when you're fighting guys of the caliber of Johnson and Joseph Benavidez, and McCall lost both those fights by decision.

Then in December of 2013, things got worse when Ian's close friend and roommate, fellow UFC fighter Shane Del Rosario, passed away. Ian's next fight in August was against Iliarde Santos, a tough veteran with more than twice the number of professional fights under his belt as McCall. This was no "gimme" fight for a guy dealing with everything that Ian was, but "Uncle Creepy" was able to stay focused and disciplined and not allow himself to get drawn into a brawl with the heavy-handed Santos and he came away with the unanimous decision win.

"All I kept thinking [in the Santos fight] was 'Don't stop moving! Don't stop moving!' I think my striking was on point. I think I was tied for the third most leg kicks landed in UFC history but it's hard to take a guy down when you see how strong that guy is. He's fought at 185 before," McCall says. "I think I put on a good performance. I should've finished him but he's got a head like a coconut."

Finish or not, the victory certainly showed a more measured and focused McCall with his head in the game. He also feels like Santos was a good test for his upcoming fight with Brad "One Punch" Pickett on July 19th in Dublin, Ireland.

"I look at Brad the same way as Santos as far as stand-up. He's a big, heavy puncher and he doesn't move that much," Ian says while admitting that Pickett is a slightly tougher fight. "I think Brad is going to come at me more wrestling based, especially after I crack him. Brad is like a better version of Santos - let's be honest. But I don't see it being that much more difficult."

"Uncle Creepy" also believes that he has the edge at flyweight - the weight class that Ian has always belonged at and has been his home since early 2011. Pickett, on the other hand, has only had one previous fight at 125 pounds.

"We'll see if he still has the same power. He couldn't finish Neil Seery but Seery is a tough guy," he says. McCall also is confident that he has the superior wrestling should Pickett chose to take the fight there.

"Brad is an Englishman who trains in America and he turned into a wrestler once an Irishman cracked him. Which is fine but that's not gonna work in your favor in this fight. Don't get me wrong, Brad can wrestle pretty well but wrestling is in my DNA."

While McCall confesses that recent injuries have kept him from wrestling as much as he'd like in training, he doesn't see that posing a problem.

"I'll be honest. I'm super banged up and I've been banged up for the past year. Now I feel good. I have all these injuries and I'm just finally getting better but wrestling is me," he stresses. "It's embedded in me and it's not going anywhere. I think because I've been training so hard for the past year and I've peaked so many times in the last year trying to get ready, my overall game has gotten a lot better. I'm not becoming some new fighter, I'm just becoming a better fighter."

McCall is well aware that Pickett has good boxing and heavy hands, but as far as he's concerned, his footwork and speed are the perfect counter to Brad's power. "Brad's slow," he says bluntly. "He got out-footworked at 135. It's whole different level of speed and footwork at 125. But you know me, I'll fight anywhere. If it turns into a wrestling match, jiu-jitsu... you wanna kickbox? Cool. Obviously, I don't wanna sit and brawl with him and trade punches with him. He probably does hit harder than me, I'll give him that."

Above all, Ian is itching to fight again and he's definitely looking forward to fighting another exciting fan favorite in Pickett. "This is a fight that has bonus written all over it," he says before adding, "If I can catch two bonuses that would be even better."

McCall knows Pickett is a tough guy but he still has his eye on the finish. "I've gotten even faster since the Santos fight. And I think I hit and kick harder – I’m just learning to plant better. But I need to start knocking people out and finishing people; that's the end game," he says. True, but it's not like Ian McCall fights are ever boring or slow - even when they go the distance.

Okay, all that is great but what about the "X-Factor" here? Where is Ian at mentally?

"My life is pretty awesome and simple at this point," he says. He has a girlfriend he's been happily with for a while, his custody issues over his daughter are sorted and he spends a lot of time in rural Nevada near Reno, enjoying nature and being away from the chaos and stress of Orange County. So it seems Ian is in a good place psychologically. Dare I say that this is a more mature "Uncle Creepy?"

McCall recently trained with BJ Penn and he was mentored in his early years by Chuck Liddell, so I ask if having two legends that he was close to get kind of pushed into retirement makes him think about his own future beyond fighting.

Ian says he's made sure to plant seeds financially and he feels like he has a good business sense but, not surprisingly, admits that he's a guy who has to do something creative or performance based to stay sane. And apparently I'm not the only one to think his charisma and crazy life experiences would make him a natural actor.

"I've done acting my whole life. I've taken acting classes since middle school and I have a lot of friends in Hollywood. And they all go, 'You need to act'. So, that would be awesome. If I could act the rest of my life and be like the Danny Trejo of teenagers, that would be great.  I mean if the opportunity comes up, it comes up, if not, that's fine."

How does he feel about BJ's fight with Frankie Edgar and how "The Prodigy" ended his fight career? Ian offers a unique perspective on how he thinks fighters should "go out."

"That ruined my weekend, seeing BJ not really perform. It was depressing. But it's over when it's over and it didn't materialize like he hoped," McCall sighs. "This isn't like other sports - the greatest don't go out on top, the greatest go out on their shield. I'm sure GSP and Anderson will come back and crush a few people until some new Chris Weidman or some new Johny Hendricks comes in and knocks them both out and sends them packing,"

And he believes in no uncertain terms that there is no shame in being beat into retirement. To Ian, that's how it should be.

"I pray for the day that I can become champion and some young buck can come in and try and kill me. That's the original warrior way."