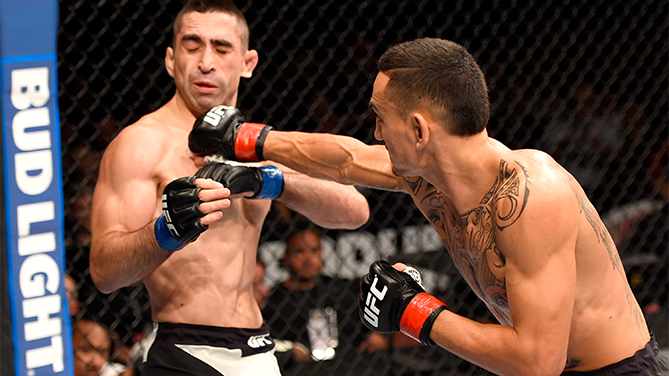 No. 4-ranked featherweight contender Max Holloway continued to make his case for a world title shot at The Forum in Inglewood, California on Saturday night, winning his ninth consecutive bout by taking a shutout three-round decision over Ricardo Lamas.

Scores were 30-27 across the board for the 24-year-old Hawaiian.

Holloway’s pressure never allowed Lamas to get into the fight in the first round, with only the Chicago native’s chin and toughness keeping him from getting halted in the opening frame.

Having survived that first round, Lamas came out confidently in round two, bruising Holloway’s leg up with low kicks. Midway through the round though, Holloway began tagging and hurting Lamas. Lamas roared back and briefly rattled Holloway before the fight strayed to the mat briefly. Back on the feet, Holloway made his move again and brought the fight back to the canvas, nearly sinking in a choke on Lamas between thudding ground strikes, putting an exclamation mark on another big round.

The pace settled down in the third, Holloway still remaining in the lead as Lamas looked for an opening to turn things around. It didn’t come, but Holloway gave him a shot when he dared Lamas to bang it out in the final seconds, and they did, thrilling the crowd as the horn sounded. 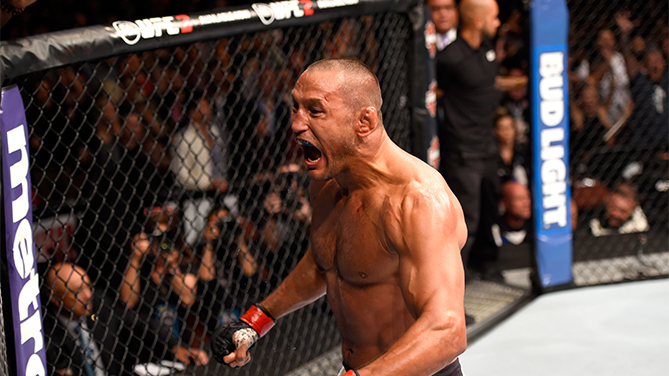 Middleweight superstar Dan Henderson continues to amaze at 45 years old, as he turned back the clock once again with a thrilling second-round knockout of Hector Lombard. But will it be the last time we see “Hendo” in the Octagon?

“I’m not sure what’s gonna happen after this fight, I’m gonna see what happens, but that could have been the last one of my career,” Henderson said.

If it is, what a way to go out for one of the sport’s all-time greats.

The crowd was in Hendo’s corner from the start, and he gave them something to cheer around the midway point of the first round, as he cracked Lombard with a right hand that made the Cuban’s legs rubbery. But in his eagerness to finish his foe, Lombard hurt Henderson with a punch of his own and then threw him to the mat. Henderson avoided trouble there and got back to his feet, but Lombard began teeing off on the former two-division PRIDE champion, rocking him on several occasions before the two fell back to the mat with a little over a minute left, allowing Henderson to make it out of the round.

The two traded kicks to open round two, and then the home run swings began again, each looking for the finisher. Yet shockingly, it wasn’t Hendo’s right hand that ended Lombard’s night in the second minute, but a right kick to the head followed by an elbow that sent the Cuban to the deck hard. The final right forearm was window dressing as referee Herb Dean stepped in and stopped the bout at the 1:27 mark of the second round. 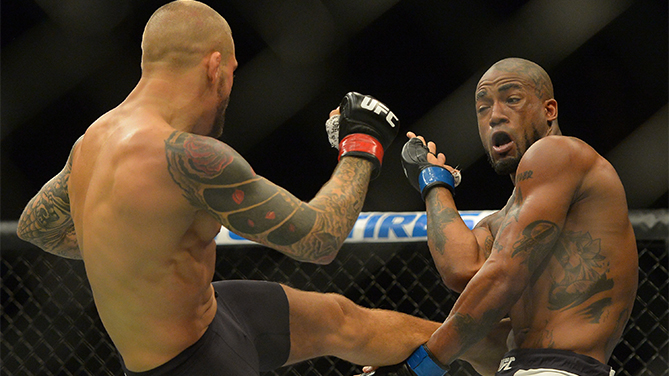 Dustin Poirier continued his tear through the lightweight division in the main card opener, knocking out Bobby Green in the first round to make it four straight since his return to the division in 2015.

Green’s customary in-fight showboating and trash talking cost him in the second minute of the first round when Poirier cracked him on the jaw and nearly finished him. Green bounced back to his feet, but “The Diamond” kept the heat on, not allowing Green to get into gear, and after sending the Fontana, California product to the canvas again, this time he finished the bout, with referee Jason Herzog stepping in at the 2:53 mark.