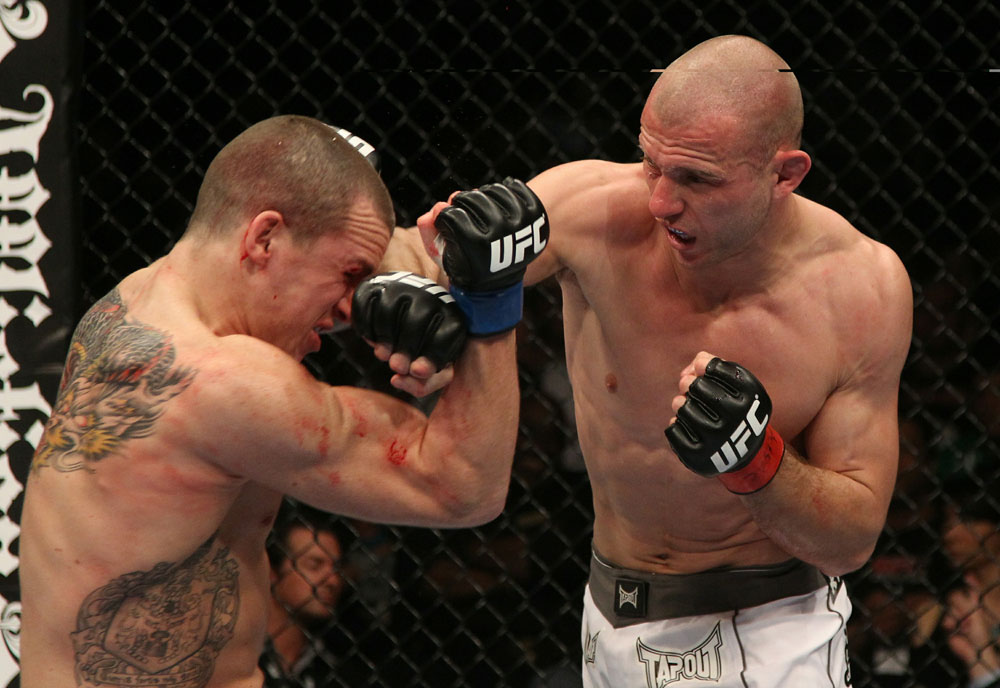 Anytime, anyplace, and, most importantly, the “Cowboy” will fight anyone. Whether it is a champion, a former winner of The Ultimate Fighter or a promotional newcomer, it doesn’t make a difference to Donald Cerrone. All challengers will be welcomed with the same in cage fury from the man sporting the black ten gallon hat. It’s this attitude that has made him a fan favorite and what will propel him into his showdown with Vagner Rocha at UFC 131.

On the long list of WEC fighters who transferred to the UFC because of last year’s merger, only a select few names topped Cerrone’s in anticipation of an Octagon debut. Cerrone was a perennial top contender in the WEC’s lightweight division, as well as, arguably, its most exciting fighter, with five “Fight of the Night” awards to prove it. That first trip to the UFC cage came quicker than anticipated though, as Cerrone was called to replace an injured Sam Stout less than a month out from his last WEC fight.

A month later, he made his debut at UFC 126 against hard-hitting Brit Paul Kelly. “I really didn't know who Paul Kelly was, but I was just excited to get in there to fight,” admits the 28 year old, who found out the name of his opponent after agreeing to the bout. Once he found out what Kelly’s fighting style was like, the news elicited another patented Cerrone response. “I found out he was a striker and I was like ‘hell yeah.’”

The fight itself was classic action from the “Cowboy.” The first round was high excitement with sharp stand-up from both competitors and some solid ground work by Cerrone. At the end of the round, Cerrone scored a second takedown and scored with effective ground and pound, including elbows that opened a cut by Kelly’s right eye.

The second round started with more crowd pleasing striking until Kelly made the mistake of dropping to the ground for a guillotine choke. From there, Cerrone took over until he secured the fight-ending rear naked choke, earning “Fight of the Night” in the process.

“It felt good coming out there and submitting the guy. That's what I train everyday for, to be good at that. If the opportunity to finish a guy is there I'm going to take it. He's a good striker, he's a veteran in there, so of course the first round is going to be tough. But I felt good in there. I was happy with the win and I'm ready to go in there and do it again.”

The now 14-3, 1 NC Cerrone was booked again only a handful of weeks later for his second Octagon battle. The time and place were and still are June 11th at UFC 131 in Vancouver, BC, Canada. But the opponent has changed from TUF season 6 winner Mac Danzig to the debuting Brazilian Rocha. Before pulling out of the fight due to a training injury, Danzig did start a war of words that Cerrone has no intention of letting die down.

“I wasn't surprised he faked the injury and pulled out of the fight because that is what happens when you talk [expletive] and can't back it up. I was very motivated for that fight. I was getting ready to go in there and show Mac why I belong in the UFC. But just because Mac pulled out doesn't mean I'm not coming for him. He's still going to get his ass kicked. If he wants to talk [expletive] then he's going to get his ass kicked. That fight will happen. If he wants to make fun of me because I wear a cowboy hat then he can go do that. I will kick his ass with or without the hat. The hat don't matter.”

The new opponent for UFC 131 is the Pablo Popovitch BJJ black belt Rocha. At 6-1, Rocha will be making the leap from small shows to the big stage of a UFC Pay-Per-View card against a revered competitor in Cerrone. It’s a transition Cerrone made easily because of the extended time he spent near the top of the mountain in the WEC. “I'm glad that I went into the WEC and I wish they kept it because that transition is necessary. I don't think a guy can go from ‘Backyard Bob's Fight Series 10’ right into the UFC.”

To prepare for this bout, Cerrone trained with the usual cavalcade of renowned fighters at Jackson’s MMA in Albuquerque, New Mexico. On top of that, “The Cowboy” also trains at his 10 acre ranch called “TapOut Ranch,” where young fighters can stay for a period of time to see what it is like to train with world class fighters. The young fighters also get the chance to hang out with Cerrone and pick his brain.

“I figured now that I've made it, why not open up my own facility? Let people come to me, ask questions and let me be the frontrunner to show them the way and teach them what I do and what I've gone through to get it. I'm taking out all the BS. These are a great group of guys and we're all training for the same thing and we're all looking to go to the same places. They can come down here and I'll answer all their questions about management or any question they have about the sport. Hopefully, I can answer it or I can help you through it.”

Another fighter involved in this side project of training and helping up-and-coming fighters is UFC featherweight Leonard Garcia. “As a friend, he's like my brother, we do everything together,” declares Cerrone of his Team Jackson teammate.

On June 11th at UFC 131, “The Cowboy” wants to deliver another full-tilt fist fight for the crowd to scream at no matter who the opponent is. “I hope he doesn't come wanting to make this a jiu-jitsu match,” grumbles Cerrone, who desperately wants Rocha to be ready for an all-out war with knuckles, feet and blood. “Don't come and try to pull guard. I don't want to have a boring fight and disappoint anybody. So come ready to throw down.”