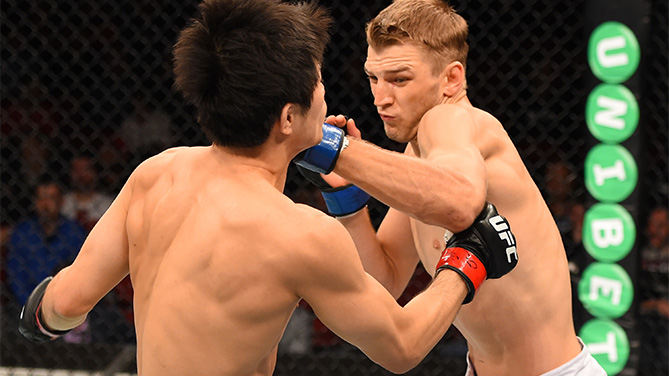 Featherweight prospect Daniel “The Hangman” Hooker made the biggest statement of his MMA career at the Adelaide Entertainment Center in Adelaide, Australia on Sunday, knocking out veteran Japanese contender Hatsu Hioki in the second round.

The knockout loss was the first of Hioki’s 12-year pro career.

Nagoya’s Hioki (27-9-2) impressed with his striking game in the early going, lulling Hooker into a stand-up battle that allowed him to get the takedown with 1:30 left. Hooker defended well on the mat, reversed position and rose to his feet, getting a rise out of the Adelaide crowd.

Using a caught kick to get Hooker (13-5) back to the mat in round two, Hioki wasn’t able to keep the New Zealander there long, and it was back to the feet, where both kept the pace high while getting in a fairly even amount of shots. A Hioki body kick with a little over a minute to go rattled Hooker, but moments later, the Auckland product ended matters, drilling the veteran with a left kick to the head that put Hioki down and out at the 4:13 mark. 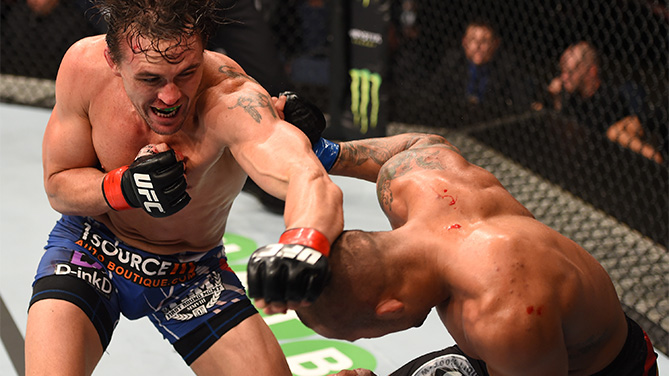 In the stand-up game, Noke and Webb were fairly even in the opening round, the Aussie possibly holding a slight edge, but when the bout hit the mat, Webb impressively showed off his grappling game, nearly catching his foe in a number of submissions.

A quick 1-2 from Webb dropped Noke to the mat early in round two, but Noke recovered quickly, avoided any submission attempts and began firing off strikes from the top position. Back on the feet, Noke looked more confident than ever as he stalked the New Jersey product, but a left hand just before the bell rocked the Aussie once more.

The two former training partners continued to battle hard in the final round, Noke pressing the action but Webb landing more than his share of potshots that rattled the veteran throughout, making it a rough call for the judges. 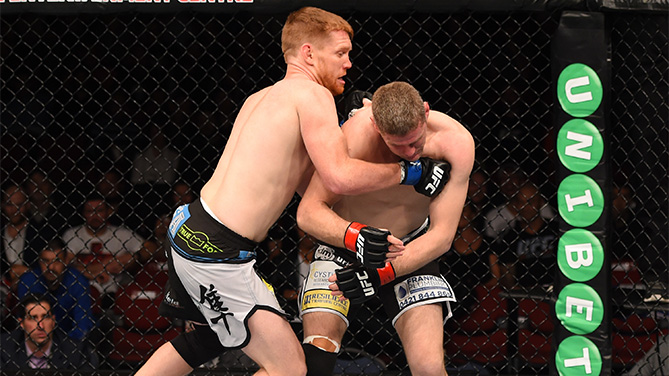 Streaking middleweight prospect Sam Alvey scored his third consecutive first-round knockout win, removing Daniel Kelly from the ranks of the unbeaten in under a minute.

Kelly’s first attempt at closing the distance was met with strikes from Alvey, and the second time was even worse for the Aussie, with a right hand dropping the Melbourne product to the mat. Kelly tried to rise, only to get dropped again, and after a third trip to the canvas, referee Steve Perceval had seen enough, with the official time coming at the 49-second mark. 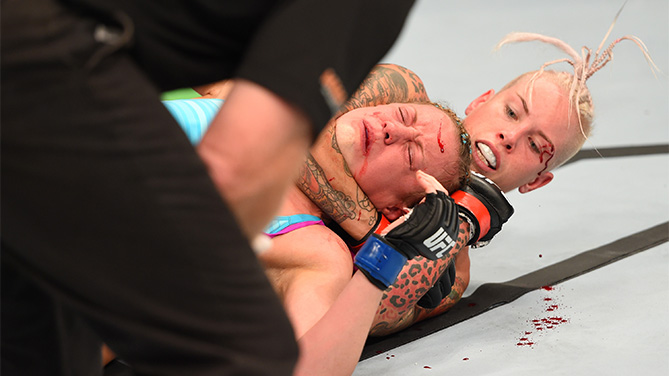 In a clash of former Ultimate Fighter 20 castmates, Brisbane’s Bec Rawlings earned her first UFC victory, submitting Lisa Ellis in the first round of a strawweight bout.

Ellis needed only ten seconds to get her first takedown, and she nearly followed it up with an armbar before losing position and allowing Rawlings to get on top. “Rowdy” Bec worked into side control and fired off some hard shots before the two rose. With under two minutes left, Rawlings began to land with several hard blows, and as the bout went to the mat, Rawlings locked in a rear naked choke that brought an end to the fight via tap out at 4:09 of the first. 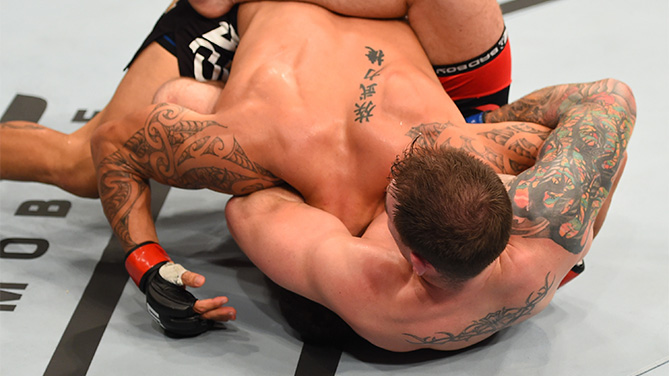 SCOTT vs. ANDREWS
In his first bout since March of 2013, Melksham, England’s Bradley Scott submitted the Gold Coast’s Dylan Andrews in the second round of their middleweight bout.

An Andrews uppercut in the second minute of the opening frame forced Scott to look for the takedown, and while he didn’t get it, he did score well in the clinch. Another flash knockdown by Andrews made Scott pay more attention to his striking defense, but it was the guillotine choke that almost ended the fight as the seconds ticked by. The resilient Scott escaped and kept pounding away at close range, refusing to be deterred from his game plan.

Switching things up in round two, Scott scored well from a distance and even after a brief stoppage by referee Greg Kleynjans for a suspected eye poke by the Brit that was in reality a punch, the former TUF Smashes finalist kept the heat on, getting the fight to the mat and finishing it with a guillotine choke at the 4:54 mark. 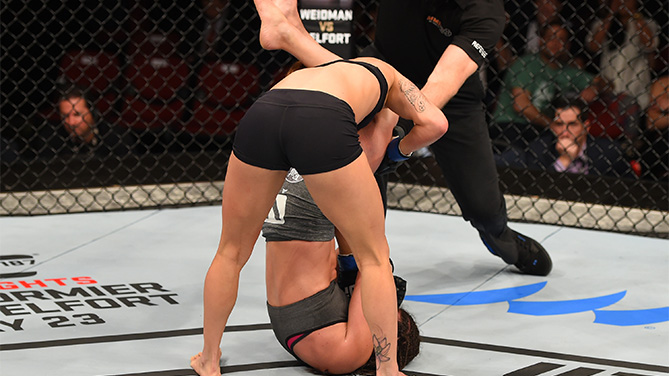 Down two rounds on the scorecards, Sydney’s Alex Chambers pulled out a come from behind victory in the final frame, submitting Kailin Curran in an exciting strawweight clash.

The pace was furious throughout the first five minutes, Curran rarely letting up with her striking attack. Chambers got a couple takedowns to stay in the bout, but it was the Hawaiian in control whenever the fight was waged on the feet.

Curran continued to fire away at Chambers in round two, completely dominating the action but unable to put away the ultra-tough Aussie.

Chambers came out fast in round three, yet Curran was unbothered by her foe’s attacks. When the bout hit the mat though, Chambers worked for the Hawaiian’s arm and after a spell of doing she, she got the armbar and forced Curran to tap out at 3:15 of the final round. 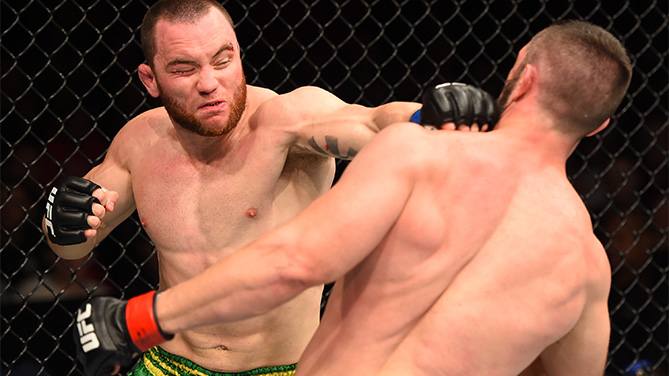 Brendan O’Reilly’s move back to the welterweight division was a successful one, as he won a hard-fought three round unanimous decision over his TUF Nations teammate Vik Grujic.

Outside of a brief flurry of punches from Grujic, the first round belonged to O’Reilly, who used takedowns, ground control and a kimura attempt to take the early lead.

O’Reilly’s first round effort left him a bit gassed early in the second, allowing Grujic to get off several hard shots. “The Badger” got his second wind though, and he roared back, landing a kick to the face and a brief takedown. As the two rose though, the exchanges favored Melbourne’s Grujic, who tagged his foe and nearly sunk in a rear naked choke near the end of the round.

The pace dipped in the third, not surprising given the grueling pace of the previous two frames, but O’Reilly’s takedowns in the final round allowed him to jump ahead and take the decision. 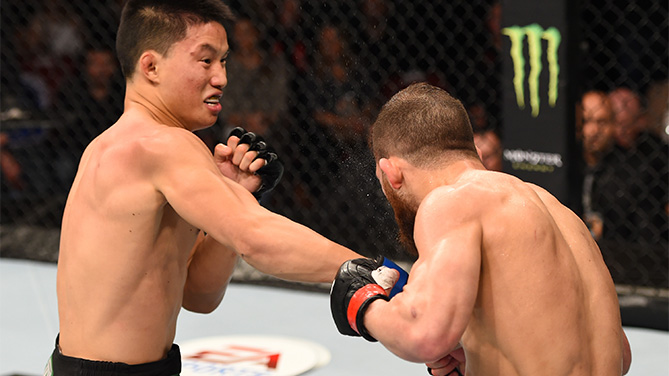 Flyweight newcomer Ben Nguyen got his UFC career off to a rousing start, stopping Alptekin Ozkilic in the first round in the Fight Night Adelaide opener.

The sharp striking of Brisbane’s Nguyen, which produced an early knockdown, forced Ozkilic to use his wrestling to even matters. Once standing, the action was more competitive, each fighter finding the range effectively. But just before the horn ending the round, Nguyen dropped Ozkilic and finished him, referee Greg Kleynjans halting the bout at 4:59 of the opening frame.