After a competitive career that has spanned nearly three decades, give or take a year or two, Gregor Gillespie seems to have finally figured out his work-life balance.

It’s taken a bit of trial and error and some big lessons learned while competing at the pinnacle of two different combat sports, but Gillespie’s love of the outdoors has introduced an equilibrium into his life that has previously been missing.

“I would say that my first or second fight in the UFC, I started getting back into fishing. Like, really fishing; I feel like it kind of separated my week from my weekend. I still do that now,” Gillespie said. “My girlfriend got me into mountain climbing now, so I’m either fishing or mountain climbing on the weekends, but it gives me a weekend and it makes me feel like I don’t have that jail sentence lifestyle anymore.”

While we all love and enjoy the novelty of a professional fighter also working to claim his stake as the best fisherman in mixed martial arts, it’s really more than just a hobby for Gillespie.

“I’m not saying that I hated (constant training) while it was going on, I just didn't know any different. I didn’t know that I was living this super stringent lifestyle; it was literally like a jail sentence. But once I started fishing, I was like ‘Oh my gosh, this is what people do on the weekends!’ Maybe they do different things, but it’s why they have a weekend. I don’t fish during the week, I don’t do mountains during the week…I do them on the weekends as sort of a reward for making it through the week.”

The segmentation of fighting and the things that extend beyond fighting in Gillespie’s life introduced a greater sense of purpose for him, both on and off the mats — something that has made him okay with the circumstances that have slowed his career in the past two years. 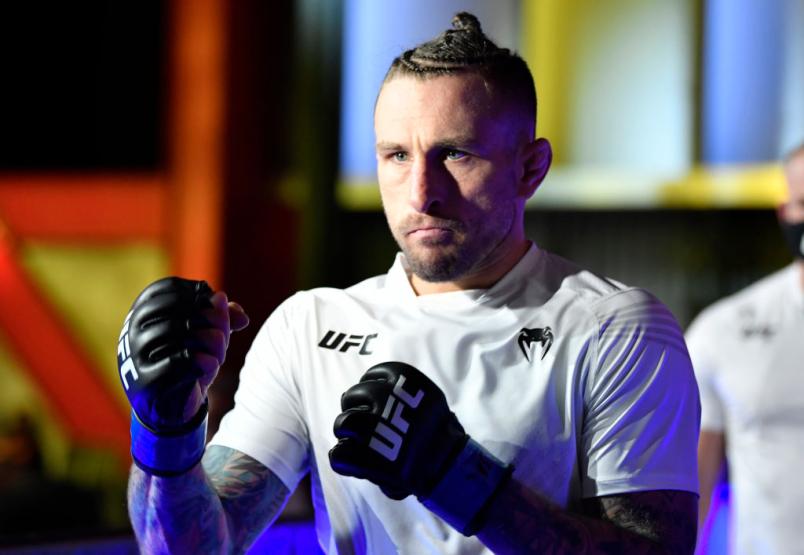 Gregor Gillespie prepares to fight Diego Ferreira of Brazil in a lightweight fight during the UFC Fight Night event at UFC APEX on May 08, 2021 in Las Vegas, Nevada. (Photo by Chris Unger/Zuffa LLC)

Gregor Gillespie prepares to fight Diego Ferreira of Brazil in a lightweight fight during the UFC Fight Night event at UFC APEX on May 08, 2021 in Las Vegas, Nevada. (Photo by Chris Unger/Zuffa LLC)

“I’ve never been one to jump on a short notice fight, and that’s definitely not going to start at 34 years old. If anything, it’s less likely to happen because I’m not staying in fight camp year-round. Maybe 10 years ago I would’ve been, but I’m just looking for the right opponent at this point. I only have a certain number of fights left — it’s not a secret, I’m not 25 — so if it didn’t happen in the next three-four months and it happened in the next five or six months, then that’s how it is.”

After suffering the first loss of his mixed martial arts career at the hands of Kevin Lee in November 2019, the 553 days between Octagon appearances were more of an opportunity for Gillespie to put his practice of patience into play than a time spent shying away from a fight — something he thinks people have misunderstood.

“People saw that loss against Kevin Lee — I think I was 13-0 at the time, I think I had 11 finishes, I was on a five- or six-fight finishing streak, the most in the UFC at the time. And then I got brutally knocked out and I think everyone thought, ‘Oh my God, is he going to come back? Why is he out so long? Has he lost it?’

“I just don't think people really examined the situation, because there was so much at play there,” the tenth-ranked lightweight said, chuckling. “One, I don’t go out and advertise this, but Kevin Lee broke my jaw when he kicked me, so I was out for five months getting cleared. The second I got cleared, everything was locked down because of COVID, and I was living five hours away at my brother’s house. I was training, but I was hitting a bag in a basement. You couldn’t train (on Long Island), it was not possible. I’m not making excuses, but I’m also not taking a fight off of hitting a bag and riding an airdyne in my brother’s basement. I pride myself in being uber prepared for fights.”

As far as coping with the loss which tarnished his previously perfect professional mixed martial arts record, losing may be unfamiliar to the New York native, but it’s certainly not new.

“The other thing that I think people forget is that I had a life before fighting (laughs). I’ve lost, like, 50 wrestling matches. I’ve lost so many times. Not only did I lose, but had to turn around and compete right after,” Gillespie said. “I think people thought I was dwelling on it — and it did really bother me; it had been eight years since my last loss. Yeah, it hurt. There was some mourning there and some grieving. But Coach Flynn, my college coach, told me that in this kind of sport, you have to have amnesia. You can’t dwell on a great win for too long and you can’t sob about a loss for two long. So I think I was over it in three days.”

“The Gift” still speaks with his college wrestling coach on a fairly regular basis, but it’s one of the only things he’s carried from that season of his life into this one. In fact, had you told Gillespie the position he’d be in today following his final college wrestling match in 2009, he’d probably laugh in your face.

See What Gillespie Said Right After His Win Over Diego Ferreira

“The Gregor that said he would never fight was living a completely different life. I had some drug and alcohol problems, and at that time…” Gillespie said, pausing before his next sentence. “College wrestling is just so hard. I remember when I got done with that, I remember saying, ‘My sentence has been served, I never have to compete again.’ Not that I was going to get fat and out of shape and be a total loser, but I just didn’t want to compete. I was done with it.

“And then I think once I really went off the deep end, and then got back on track, I didn’t really have a purpose. So I just started to train again with some guys at Edinboro while I was doing the rest of my school that I hadn’t finished, and I realized that I’m just so competitive. I thought, ‘Now I’m doing it right, so let’s see what I can do when I do it right.’ And now here we are 10 years later.” 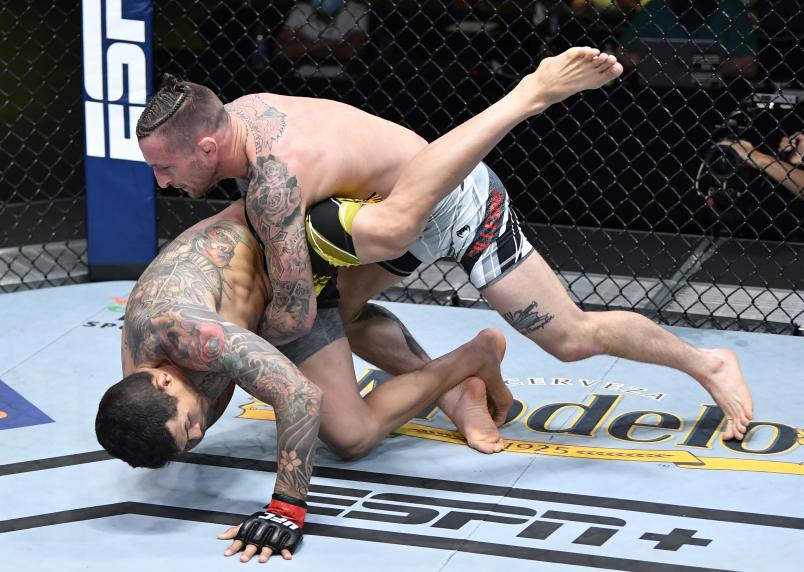 Gregor Gillespie takes down Diego Ferreira of Brazil in a lightweight fight during the UFC Fight Night event at UFC APEX on May 08, 2021 in Las Vegas, Nevada. (Photo by Chris Unger/Zuffa LLC)

While the success he’s enjoyed since jumping back into combat sports has earned him four performance bonuses in eight UFC fights (including one in his May victory over Diego Ferreira) and a record that’s hard to overlook, Gillespie sometimes can’t help but think ‘what if?’

“Sometimes I just think and say, you idiot…what if you had started a little bit sooner. You know? What if I had hit mitts before I was 25 years old? But then I think everything happens for a reason, and while that’s such a cliché thing to say, I think it’s true. For example, my arm got broken before my first scheduled fight. And I wasn’t ready to fight yet. So that gave me two more years to really recover and prepare and get into the right sort of fighting league with the right opponents. And now here we are.”

Stay patient and trust the process. Maybe it’s a little cliche, but it’s an idea that has presented itself repeatedly throughout Gillespie’s career. Whether it’s stepping foot inside the Octagon, summiting a peak atop the Adirondack mountains or waiting for a nibble on a fishing line, what is meant to be will be.