Germany's Hein hoping for a victory on home soil 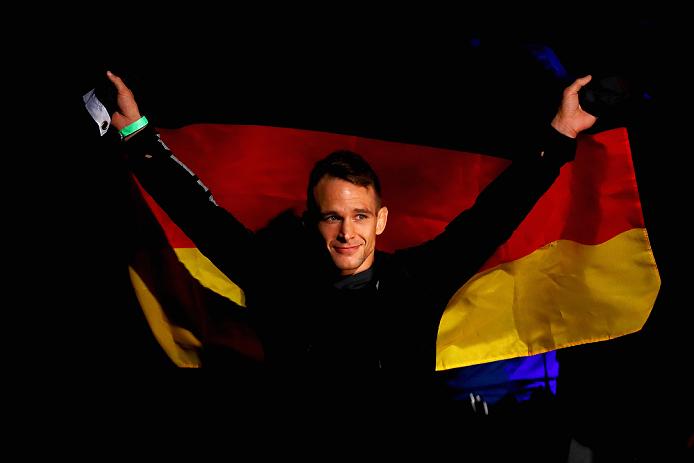 Chances are that you might not know Nick Hein was fighting this weekend at UFC Fight Night Hamburg. But chances are you’ll know or remember who Nick Hein is fairly soon.

That’s because the German lightweight is a bona fide renaissance man, one whose polarizing character has already cleanly cut his home country’s UFC fan base in two halves. One applauds the “Sergeant” for whatever he does, and the other is already looking forward to the prospect of him losing his bout against Bosnian knockout artist Damir Hadzovic this Sunday at Barclaycard Arena.

That’s in case they haven’t had an opportunity to recharge yet, because Hein’s last fight wasn’t long ago. At UFC 224 in May, the stocky Judoka faced Davi Ramos in Rio de Janeiro and tapped out to a rear naked choke four minutes into the fight. To make things worse, it had been Hein’s first fight since the Octagon had been set up in Hamburg, Germany for the first time in September 2016.

Now also a part of the UFC’s sophomore foray into the German trading capital, Hein is under immense pressure to succeed. Or is he?

That May 2014 night in the German capital that he’s talking about set the stage for Hein’s UFC debut, a fight in which everything came together for him en route to an exciting decision win over Drew Dober (who would go on to marry Hein’s sister, whom he met that same night after Hein had invited him to his afterparty when they ran into each other backstage).

Since then, things haven’t gone quite as smoothly for the former federal police officer. A few months after UFC Berlin, Hein lost a close decision against James Vick, who is now a contender at lightweight, despite knocking him down multiple times in the opening round. Decision wins against Lukasz Sajewski, Yusuke Kasuya and Tae Hyun Bang followed, but those victories lacked the heat and fire that had made his first two UFC appearances can’t-miss action. Another two fights fell through at the last minute due to injury, which makes for six fights and eight training camps in the UFC.

That’s still a solid workload, even though Hein has received heat at home for not fighting often enough, not finishing his opponents often enough or not catering to various other demands from fans and those who claim that description. But what has happened inside the cage so far has not been the main reason why there are people who passionately hate Hein.

“I’ve got an opinion about things,” he explained. “I’ve got a clear-cut opinion and I’m not afraid to say those things publicly the same way I do when I’m at home. See, when you’re at home, you’ll have a clear-cut opinion on many things, but once you’re out in the public eye, you’ll try to be a little more diplomatic about it. And I’ve just dropped that at some point.”

That’s why, after hundreds of young men harassed women in downtown Cologne on New Year’s Eve heading into 2016, Hein took to Facebook to voice his opinion. Let’s say that he didn’t try to sugarcoat matters.

“Then that thing went viral – 17 or 18 million people saw that,” laughed Hein. From then on, it was one TV show after another – newspaper articles and radio interviews on top of that.

“There were four publishing companies offering me to write a book about these topics. I just took the best one of those,” he laughed.

So, the “Sergeant” swapped his gloves for pen and paper and wrote down what he had experienced during his years on the German federal police force – some of which he spent at the very Cologne train station that made headlines in early 2016. He wrote, “Polizei am Limit” (“Police at their breaking point”) while he was preparing for UFC Hamburg.

“I busted my (expletive) with that double burden,” said Hein.

Still, after his book had been released – and had made it onto the bestseller list of renowned German magazine “Der Spiegel” – and Hein wasn’t fighting for twenty months due to injury, things quieted down around him. Even his loss to Ramos came and went without much fanfare around the bout. Once he was back in his locker room that night, though, indulging in post-fight candy, Hein knew that he would be back very soon.

“I was sitting there on the floor, eating, and then my coach said: ‘Seriously, sometimes, it’s best to get right back at it. You should do that.’ And I felt the same way.”

When he touched down in New York City after the fight for a short vacation, he got the matchmaker’s call. Hadzovic it was – not exactly a tune-up fight. And ever since his appearance at the UFC’s sixth visit to his home country has been announced, he’s suddenly been back in the German MMA scene’s consciousness, with support and hate ramping up at a similar rate. His bout against Hadzovic will likely only add fuel to the fire, no matter the result.

“He’s an all-rounder”, Hein said of his opponent, whose 1-2 UFC record doesn’t tell the whole story. “He has fought solid opposition in the UFC, he knocked out Marcin Held with a brutal knee. Most of my haters are of course hoping for a knockout just like that. Everyone says that he’s got heavy hands. But with him, it’s like with anyone else in the UFC. He’s just a very, very solid fighter. If you’re in the UFC, you’re a strong fighter, I’ve always said that.”

“But I know what I’ve done, what I’ve been through since (the last time the UFC was in Hamburg). I know what my training looks like today, compared to back then. I’m very optimistic.”

Maybe those are all the ingredients he needs to reenact that Berlin summer night it all began in. Then, even without a finish, Nick Hein would certainly be right back on the horse.