George Roop: Something to Prove

"The one thing that is constant in every one of my fights is that I show up to fight and get after it." - George Roop 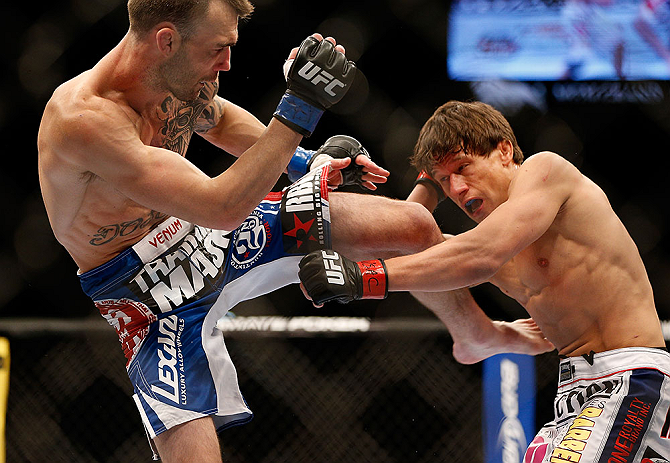 George Roop has a chip on his shoulder and there is no way around it. In fact, it has been there for quite some time.

That said, where he was once bristled by personal frustrations, these days those storms have calmed and given way to an entirely new tide that pushes him forward. Less than a year ago the Arizona native was being battered and tossed about in the break, but now he’s ripping past anything that gets in his way. While the final destination hasn’t yet materialized on the horizon, he doesn’t need to see it to know that is where he’s going to land.

And that is where the true nature of the chip he carries on his shoulder comes into play. The place he’s aiming for is the coveted spot atop the bantamweight division, but what irks, fuels and then motivates the 31-year-old is the complete lack of respect his fellow travelers have given. This notion is ultimately amplified as the media and critics continue to dismiss him at every turn as if the thought of the TUF alum becoming the bantamweight champion is an absolute impossibility.

Nevertheless, outside opinion and inside underestimation aren’t enough to push him off task. The only person he has to convince that the goal is obtainable is himself, and in his mind, the confidence to do so is at an all-time high. He may not yet be within striking distance of a title opportunity at 135 pounds, but he’s putting everything he has into every step, and he’s successfully climbing the divisional ladder one rung at a time.

Throughout his career in MMA, the end result hasn’t always been the desired one, but Roop showing up to put on a scrap is a sure-shot guarantee.

“The one thing that is constant in every one of my fights is that I show up to fight and get after it,” Roop said. “I’m not going in there to put on a snooze fest or anything like that. It’s not going to be a stinker. Fans can absolutely look forward to me showing up to fight and look forward to me being a better fighter than I was in my last fight.”

Where the Tuscon-based fighter is currently enjoying the best run of his UFC career, what is perhaps the most important has been his ability to finally establish footing in a weight class under the Zuffa umbrella. Since joining the UFC in 2008, the rangy striker has experienced mixed results inside the cage.

After dropping two of his first three showings under the UFC banner, Roop was promptly released from his contract. In the aftermath of being cut, he found himself in jeopardy of suffering a similar fate as many other fighters who had competed on the reality show but washed out in the high-stakes environment of the UFC…becoming a footnote and forever labeled as a reality TV fighter.

Roop was bound and determined to keep that from happening, and after picking up a victory on the regional circuit in his first fight after being released, the Team Apex MMA fighter inked a deal to compete inside the “little blue cage” of the WEC. While the results he found competing under the WEC banner weren’t much different than what he’d experienced in the UFC, as he was victorious in only one of his three outings, it was the lone win he picked up, and the manner in which he did it which most likely extended his time with Zuffa. 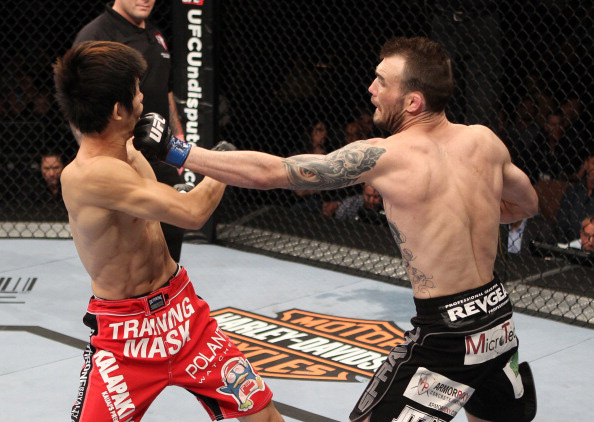 heavy underdog and in desperate need of a win. Yet, despite the lingering circumstances and the pressure being on, Roop stepped up to the plate in huge fashion and landed a crushing head kick that left “The Korean Zombie” laid out cold on the canvas.

In addition to earning Knockout of the Night honors, his win over Jung showed there was perhaps more to Roop’s abilities than initially thought. While the uptick he felt after his win was certainly a welcome change of pace, those good vibes wouldn’t last long, as he was stopped by Mark Hominick in his return bout with the UFC at Fight for the Troops 2 in January of 2011. He would bounce back strong in his next outing as he punished then-prospect Josh Grispi in their tilt at The Ultimate Fighter 13 Finale six months after suffering a TKO defeat to “The Machine.”

In the aftermath of the Grispi fight, Roop finally believed everything was coming together, but unfortunately he was about to be proved otherwise in painful fashion. After being edged out by top-ranked Japanese MMA convert Hatsu Hioki at UFC 137 in October of 2011, he was crushed by a revitalized Cub Swanson at UFC on FOX 2 in Chicago.

While the loss to Swanson once again put Roop in the unfavorable position of being down two fights and having his back to the wall, it was in the time after the fight where he envisioned his next step. Roop decided the best move to make would be dropping down to bantamweight and he knew his bout with Reuben Duran at UFC 158 in March was absolutely “do or die.”

It had been three years since Roop last competed at 135 pounds, but his official UFC bantamweight debut was ultimately a successful one, as he defeated Duran via unanimous decision on the judges’ scorecards. Feeling rejuvenated and looking to stack momentum, he stepped in for his next fight just two months later when he squared-off with former WEC bantamweight champion Brian Bowles at UFC 160 in Las Vegas, Nevada.

Despite once again being the underdog going into the fight, Roop believed full well he had far more in the heart department than what Bowles brought to the table. That said, he knew the Georgia native’s hands were brick-heavy and those notions were validated when Bowles put Roop on the canvas at the end of the first round. Nevertheless, Roop would bounce back with fire and properly dusted the former champion midway through the second frame.

“That fight worked out the way I expected, minus me getting dropped right at the end of the round,” Roop said. “I felt I was going to have the striking advantage and I knew I was going to break him at some point later on in the fight.”

The victory over Bowles made it two consecutive wins for Roop since dropping down to 135 pounds. While the momentum he felt was nice, Roop made the most of his post-fight interview opportunity as he used Joe Rogan’s microphone to let the MMA world know he was coming for that bantamweight title. For Roop, it didn’t matter the headlines of the MMA media world weren’t buzzing with his title talk the next day. The only thing that mattered to him was that he had now vocalized his dream and floated it out.

Suddenly, that chip he had been carrying on his shoulder was no longer the result of him having 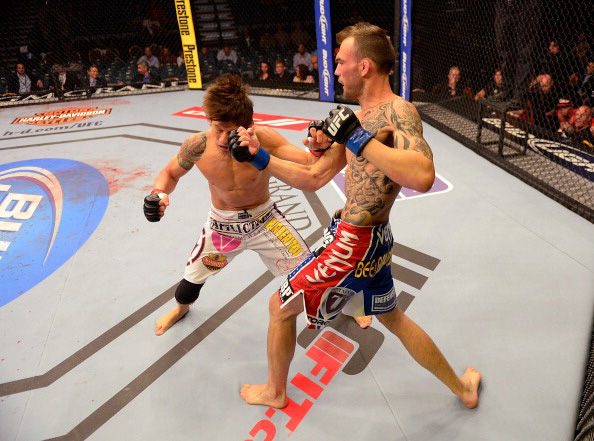 all the tools but being unable to put it all together inside the cage. Now, it was about respect and the lack of it he was receiving from the rest of the bantamweight division.

He will take his next step on his quest to earn that respect on Wednesday when he steps in to mix it up with fellow surging Francisco Rivera at Fight for the Troops 3 in Fort Campbell, Kentucky. With the false starts he has experienced in the past, there is not a single aspect of Rivera’s game he’s overlooking. That said, Roop is on a mission to put the final touches on what has been a banner year for him, and a victory over Rivera would make his 2013 campaign a defining chapter in his career.

“I think it’s a great stylistic fight,” Roop said. “We are both good strikers and I believe it is going to be a very entertaining fight because of that. We both come out very aggressive and I think we’ll put on a good mixed martial arts fight for the troops. He’s on a tear himself and has picked up a few in a row.

“We both have momentum coming into this fight. He has a lot of confidence and my confidence is high as well. The thing that separates me from him is definitely the caliber of competition we’ve faced. I’ve fought top 10 guys in the world - that’s all I’ve faced honestly -and I really think that is the difference between us. I’ve fought nothing but killers and the guys he’s fought are pretty much cupcakes.”

With his fight against Rivera quickly approaching, Roop is in the process of making his drop down to the 136-pound limit competing in the bantamweight division requires. At 6’1”, Roop’s frame is an unusual sight for the weight class, but he believes his range and length provide a distinct advantage against the compact builds more commonly seen in the division.
Despite his cut for this bout at FFTT3 being the third time he’s put himself through the experience of making the bantamweight limit, the process hasn’t gotten any easier.

“No it hasn’t,” Roop answered when asked if the cut is getting smoother. “It sucks just as bad as any other weight cut. This is a hard cut for me. I cut about 40 pounds just to get down to 135. It’s a big weight cut for me and I’m a very skinny person as it is and there aren’t a lot of places on my body to cut from. I’m not sure where the 40 pounds I cut comes from but I get there, man. 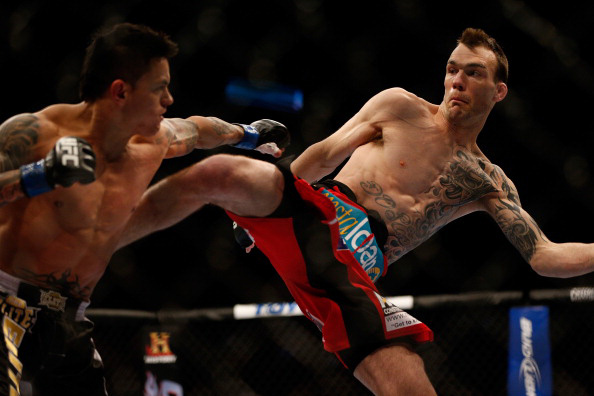 find victory and move closer to title contention, those elements will be amplified by the environment in which the battle is set to take place at Fort Campbell.

The bout with Rivera will mark the second time Roop has competed in front of the men and women of the United States military. Putting on a show for the people who protect this country is an honor Roop cherishes and he promises to bring non-stop entertainment when he steps inside the cage.

“It means a lot to me,” Roop said. “They go out there and make the ultimate sacrifice. I’ve done a Fight for the Troops show before, this will be my second time, and it is a lot of fun. These men and women have a ton of energy and they are very supportive of the UFC. As fighters, we are all very appreciative of that, and we’ll go out there and put on a great show for them.”