Geoff Neal isn't used to not being able to train every day. So during the current quarantine, Neal is finding positives from other things in life to occupy his time.
By Gavin Porter, on Twitter: @PorterUFCnews • Mar. 30, 2020

Geoff Neal only has one speed. He is the first one at the gym in the morning and the last one out, the type of guy who lives to compete. His work ethic and mindset are major reasons why he’s 5-0 in the UFC and is one of the most exciting rising stars in the welterweight division.

But with the recent closures and restrictions due to COVID-19, Neal has been forced to “dial it back a bit” physically and is using the time to focus on the other important things in his life.

“I’m used to punching people in the face and getting punched in the face, so spending a little time at home away from training is driving me a little crazy,” Neal told UFC.com. “But this time alone is giving me the time to let a few things heal, it’s letting me spend more time with my two-year-old daughter and it’s giving me a chance to work on my real estate license.”

Neal’s most recent UFC appearance resulted in an impressive first-round knockout of Mike Perry at UFC 245. That victory secured Neal’s spot in the welterweight rankings and set him up for a potentially massive 2020.

Those plans to climb to the top of the division remain unchanged despite the undeniable effect that COVID-19 has had on the sports landscape and the world.

“I didn’t plan to fight until the middle of the year anyway. I just want things to return to normal and I’m not approaching this whole situation with a negative mindset,” He said. “I feel like UFC has done things correctly so far. They know we want to fight, and I know that my peers want to fight. It makes me proud to know that. That’s part of the reason that I try to respect every fighter. Even though we don’t have the same personalities, we are all the same at the core. We have families, countries and other things in our heart that we fight for and, virus or no virus, we will continue to fight for those important things.”

“Handz of Steel” recently saw welterweights Colby Covington and Gilbert Burns campaigning to fight former champion Tryon Woodley on short notice. And while Neal is eager to jump into a big-time fight and to be known as a guy who isn’t afraid to take risks, he isn’t ever going to be the type of guy to plead for a bout. 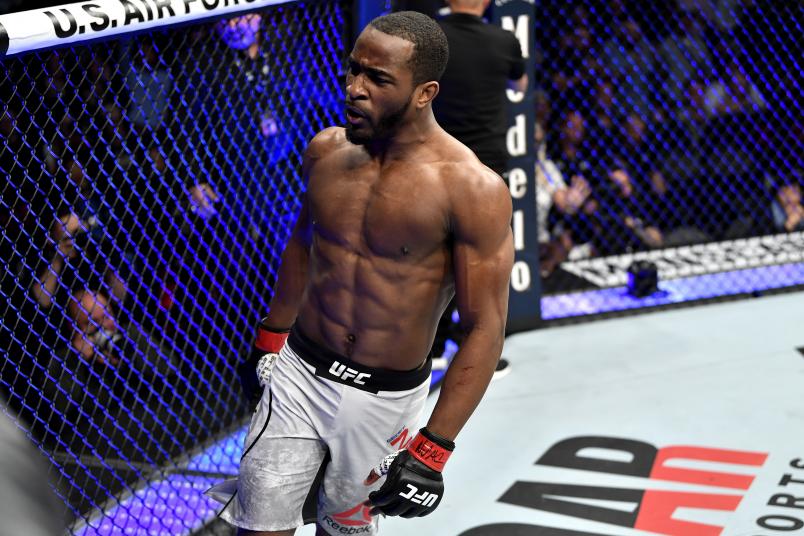 LAS VEGAS, NEVADA - DECEMBER 14: Geoff Neal celebrates his victory in the octagon over Mike Perry in their welterweight bout during the UFC 245 event at T-Mobile Arena on December 14, 2019 in Las Vegas, Nevada. (Photo by Jeff Bottari/Zuffa LLC)

LAS VEGAS, NEVADA - DECEMBER 14: Geoff Neal celebrates his victory in the octagon over Mike Perry in their welterweight bout during the UFC 245 event at T-Mobile Arena on December 14, 2019 in Las Vegas, Nevada. (Photo by Jeff Bottari/Zuffa LLC)

He didn’t stir the pot for his fight with Frank Camacho, for a matchup with Belal Muhammad or his PPV showdown with Niko Price.

It’s just not who he is.

“I’m not going to ever beg for a fight. You can put that in stone. You can guarantee that if a fight comes to me, the right way, I’ll take it,” Neal said. “I could still potentially get two or three fights in by the end of the year. Hell yeah, I want to fight, and hell yeah, I want more money in my bank account. So, if Dana can make it happen, I will fight. I’m down.”

And even though Neal isn’t sure when he’ll have another fight on the books, he’s just going to keep on the homework grind, facetime with his teammates and coaches from Fortis MMA and stay ready for his next chance.

Let’s hope we see Neal in the Octagon sooner rather than later.