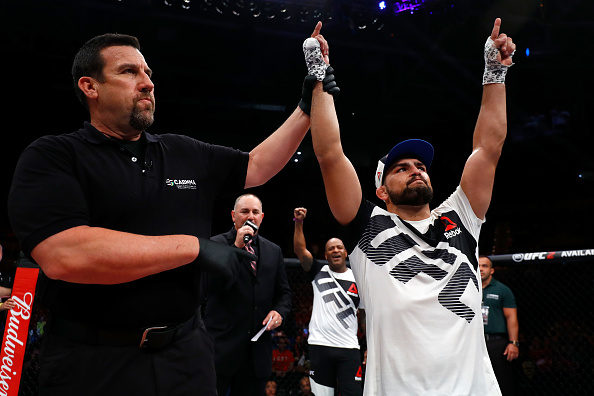 Twenty years after his UFC debut, Vitor Belfort made the walk to the Octagon Saturday night at the Olympic Training Center in Fortaleza, Brazil, but it was rising middleweight star Kelvin Gastelum who made a statement with his speed and power, as he stopped the former UFC champion in the first round.

“I’m confident in my skills to finish any fight and I’m ready for what’s next,” said Gastelum, who talked of a possible fight with Anderson Silva in Rio de Janeiro in June. Also hoping to fight in Rio is Belfort, who has one fight left on his UFC contract.

Even at 39, Belfort’s hands were fast, and he proved it with some early shots to the head of Gastelum. Gastelum did return fire with a jackhammer jab that bloodied his foe’s nose, and after a spinning kick by Belfort, Gastelum dropped “The Phenom” hard with a left hand to the head. Belfort surprisingly weathered the ensuing follow-up attack, got back to his feet and even landed a hard shot, but moments later, another knockdown by Gastelum was all referee John McCarthy needed to see to stop the fight at the 3:52 mark of round one.