Forty is the New Thirty for Yoshihiro Akiyama 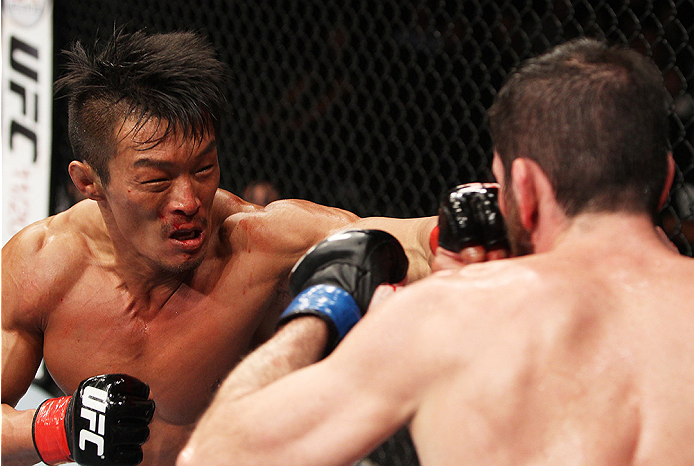 Yoshihiro Akiyama doesn’t have an answer when asked why his level of popularity has remained untouched over the years. But he is appreciative of the fan support.

“I’m delighted,” he said, “but I don’t know where my popularity comes from.”

We could start with his acting and modeling gigs or his “Sexyama” persona, but what it really comes down to is his fighting style, which is centered not on a particular martial arts base, but on entertaining those who are watching. Yes, Akiyama has a judo black belt, but those skills often go out the window in favor of back-and-forth slugfests. It’s why, despite a 2-4 UFC record, fans have never left his side.

This was never more evident than last September in Saitama, Japan, when Akiyama returned from a 31-month layoff to fight Amir Sadollah. The normally reserved Japanese crowd got louder for Akiyama than anyone else on the card, almost willing him to win against a younger opponent with the ability to extend his losing streak to five and possibly end his UFC career. Akiyama prevailed, taking a three-round unanimous decision win.

“I’m always under pressure to succeed before any bout,” he said. “It was just great to have won.”

A man of few words, Akiyama couldn’t hide the emotions of the victory in episode 48 of the Korean reality show “The Return of Superman,” which documented his return to the Octagon and its effects on his wife and daughter. It might have been the perfect way to end his storied career at the age of 39, but at 40, Akiyama is back for a bout in Seoul this weekend against Alberto Mina. What he’s chasing is still a mystery though.

“I haven’t found the goal yet,” said the owner of three UFC Fight of the Night awards. “I will try my best until I find my goal.”

For now, his aim is to deliver a bout to remember for his fans in South Korea. Akiyama is a native of Osaka, but he is of Korean descent and a superstar there, not only as a fighter, but as an actor and frequent guest on television shows. Now he will fight in Seoul for the first time as a UFC fighter in the promotion’s inaugural event there.

“I feel happy and think it’s a really excellent opportunity to have a bout in my other home country,” said Akiyama, who has family in Korea who will be attending the event. His last appearance in Seoul was a winning one, as he knocked out Denis Kang in the first round.

“It was a really great bout,” he said of one of his signature victories. “The Korean fans’ support encouraged me and helped me a lot.”

They will be back out in force at the Olympic Gymnastics Arena to watch their favorite make that walk to the Octagon once more. What Saturday night holds is anyone’s guess, but Akiyama does not see retirement in his future anytime soon, saying of 2016, “I would like to show the fans that I’m still a cool fighter, even though I’m over 40 years old.”