The Flyweight Division Heats Up 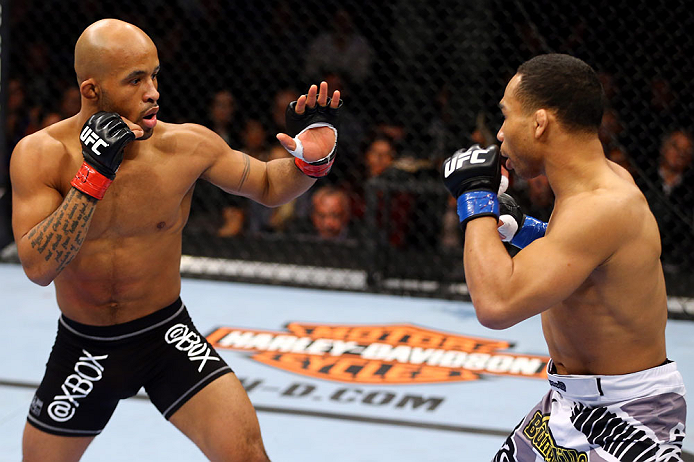 It may be one of the youngest collectives under the UFC banner, but the flyweight division is starting to shape into a highly competitive outfit with perennial title threats lurking in its ranks, all of which are aiming at dethrone long-reigning king and pound-for-pound-ranked Demetrious Johnson, who has stood for the past three years as the first and only champion of the 125-pound fold.

“Mighty Mouse” has been a dominant force throughout his flyweight rule, as he’s successfully defended the championship strap on six straight occasions - turning back a cast of dangerous and talented opponents in the process. Yet, where running through the elite tier of a division that is still taking shape would put most weight classes in jeopardy of being cleaned out of potential contenders, the flyweight picture is hitting a different type of stride.

In addition to the established and proven names on the roster, a wave of young talent has started their push to break through to the next level of competition at 125 pounds. These elements have combined to make the current landscape and future of the flyweight division one for fans to keep their eyes on, and if the traffic in the weight class moves anything like the fighters that inhabit the division do inside the Octagon, then the coming year will be a storm of action delivered at a fast and frenzied pace.

Here are a few crucial elements to track in the flyweight division in the coming weeks and months.

There is no better word to describe Demetrious Johnson’s run as flyweight champion than “dominant.” The Washington state-based titleholder has pulled off one impressive showing after another as he’s dispatched all comers who have attempted to unseat him as the king of the 125-pound division, the majority of which have hardly posed a threat as Johnson has battered, then finished, all but two of the title challengers he’s faced. But there was one fight in that mix that worked out in a different fashion than the rest.

When the 29-year-old champion stepped into the Octagon to face The Ultimate Fighter season 14 winner John Dodson, he did so looking to make his first successful defense of the flyweight strap. After scoring a TKO victory over future bantamweight champion TJ Dillashaw, “The Magician” decided to return to his natural fighting weight at 125. Two wins out of the gate at flyweight put Dodson in position to face Johnson for the divisional crown and their paths collided in Chicago in January of 2013.

The reason this fight stands out in the careers of both men is largely due to the back and forth nature of the bout. The Jackson/Winkeljohn product dropped the champion with big shots in the early stages of their match and appeared to be on his way to becoming the new flyweight champion before Johnson tapped into his resilience and pulled off a strong comeback in the second half of the fight. While Dodson’s power and accuracy set the immediate tone, it would be Johnson’s pressure and tenacity that would win out on the judges’ scorecards.

Not only was their original meeting a great fight by all measurable standards, but with Dodson being the only man during Johnson’s reign to have him in serious trouble, the heavy-handed TUF winner suddenly became the only fighter most believed could defeat the longstanding champion.

And even though Dodson’s return to title contention was figured to come sooner than UFC 191 on September 5, as an injury kept him on the sidelines for a lengthy clip, that anticipation still lingers throughout the MMA community. The main event title tilt has very clear storylines. One is a champion who is on the verge of being recognized as the pound-for-pound best in the sport and looking to cement his legacy as one of the greatest champions in UFC history by leveling his biggest threat, and the other is a fighter who has long envisioned himself as the best 125-pound fighter on the planet who is looking to finish a job he nearly completed the first time around.

There is also no love lost between Johnson and Dodson, and all of those factors will combine to make their rematch a “can’t miss” scrap.

ANOTHER SHOT BREWING IN JOSEPH BENAVIDEZ VS. ALI BAGAUTINOV

When it comes to a conversation about title contention in the flyweight division, there is no way not to include Joseph Benavidez.

The New Mexico product has held his status among the best of the best at 125 since the division’s inception back in 2012. In those three years, the Team Alpha Male staple has steamrolled a healthy list of competitors en route to earning two shots at Johnson’s title. Unfortunately for Benavidez, the answer to solving the riddle of Johnson’s versatile style has eluded him, thus forcing him to exit the Octagon empty handed on both occasions.

Nevertheless, Benavidez is as resilient and talented as they come in the flyweight division, and he is currently in the midst of building his case for a third crack at the divisional throne. He’s won three straight bouts since his last loss to Johnson back in December of 2013, and another high profile victory could very well seal the deal for another opportunity to achieve his ultimate goal. That said, he is going to have a firm challenge standing directly in his path as the former title challenger is set to square off with Ali Bagautinov at UFC 192 in Houston, Texas on October 3.

The fight will be the first showing for the durable Dagestani since coming out on the losing end of a five-round beating at the hands of Johnson. While Bagautinov certainly showed his toughness throughout the 25-minute affair, he had little to offer in the offense department as Johnson brought the fight to the challenger each round at an increasingly more rapid pace than the frame prior. Bagautinov would see his 11-fight winning streak brought to a halt by Johnson at UFC 174 in Vancouver, abd the setback was amplified by a failed post-fight drug test that forced the scrappy Russian to the sidelines for one year.

There is no doubt that Bagautinov is eager to get back into the hunt for another title shot, and Benavidez is the perfect opponent to put a charge into that quest. Benavidez has trounced every one of his opponents not named Johnson and has been widely regarded as the second best flyweight in the division since the UFC opened its doors. That status certainly serves to elevate the risk/reward for anyone who faces him, and Bagautinov is certainly game to jump into those waters.

Both men want another go at the flyweight title, and their upcoming matchup undoubtedly holds a good amount of clout as to who will rise and fall in the quest to bring their goal to fruition.

While the aforementioned bouts hold a large amount of sway on the immediate path of the flyweight title picture, there are a handful of fighters on the verge of breaking through who could very well become major players in the coming year.

Both Jussier Formiga and Henry Cejudo will bring the momentum of three consecutive victories into their bout at The Ultimate Fighter Latin America 2 Finale on November 21. The scrappy Brazilian has been a force to be reckoned with since making his promotional debut back in 2012, and has been within striking distance of a title opportunity on several occasions.
Unfortunately for Formiga, stumbles in big fights have kept his championship hopes at bay, and he’ll be finally looking to get over the proverbial hump when he steps in against the undefeated former Olympic gold medalist in Monterrey, Mexico in November.

It’s the opposite effect where Cejudo is concerned. The wrestling standout turned mixed martial artist has been steadily building his momentum and skill set as he’s ascended the flyweight ladder, and the bout against Formiga represents the next level of competition for him. Cejudo has won his first three showings inside the Octagon with relative ease, and if he’s able to keep his dominance rolling in a bout with a fighter as formidable as Formiga, a title shot could materialize much quicker than most expect.

In addition to Formiga and Cejudo, two up-and-coming fighters who are set to make noise in the 125-pound ranks are Dustin Ortiz and 22-year-old New Mexico native Ray Borg.

Just six fights into his UFC career, Ortiz has already faced a collection of some of the best talent his weight class has to offer. And while two of those showdowns resulted in losses for the Roufusport standout, his performances against Joseph Benavidez and John Moraga showed that his arrival to the elite tier of the flyweight division is only a matter of time. A smashing of Willie Gates in his most recent fight proved Ortiz is already back on track, and reignited the expectations surrounding the 26-year-old Tennessee native.

Borg is another fighter carrying a substantial amount of buzz in the flyweight division. “The TazMexican Devil” may have been turned back by Ortiz in his promotional debut, but impressive victories in his three showings since have built the FITNHB representative into a fighter to watch. Borg earned back-to-back Performance of the Night bonuses heading into his bout with Geane Herrera at Fight Night: Teixeira vs. Saint Preux back on August 8 in Nashville, Tennessee, then added another quality name to his resume by outworking his opponent en route to the unanimous decision victory on the judges’ scorecards.