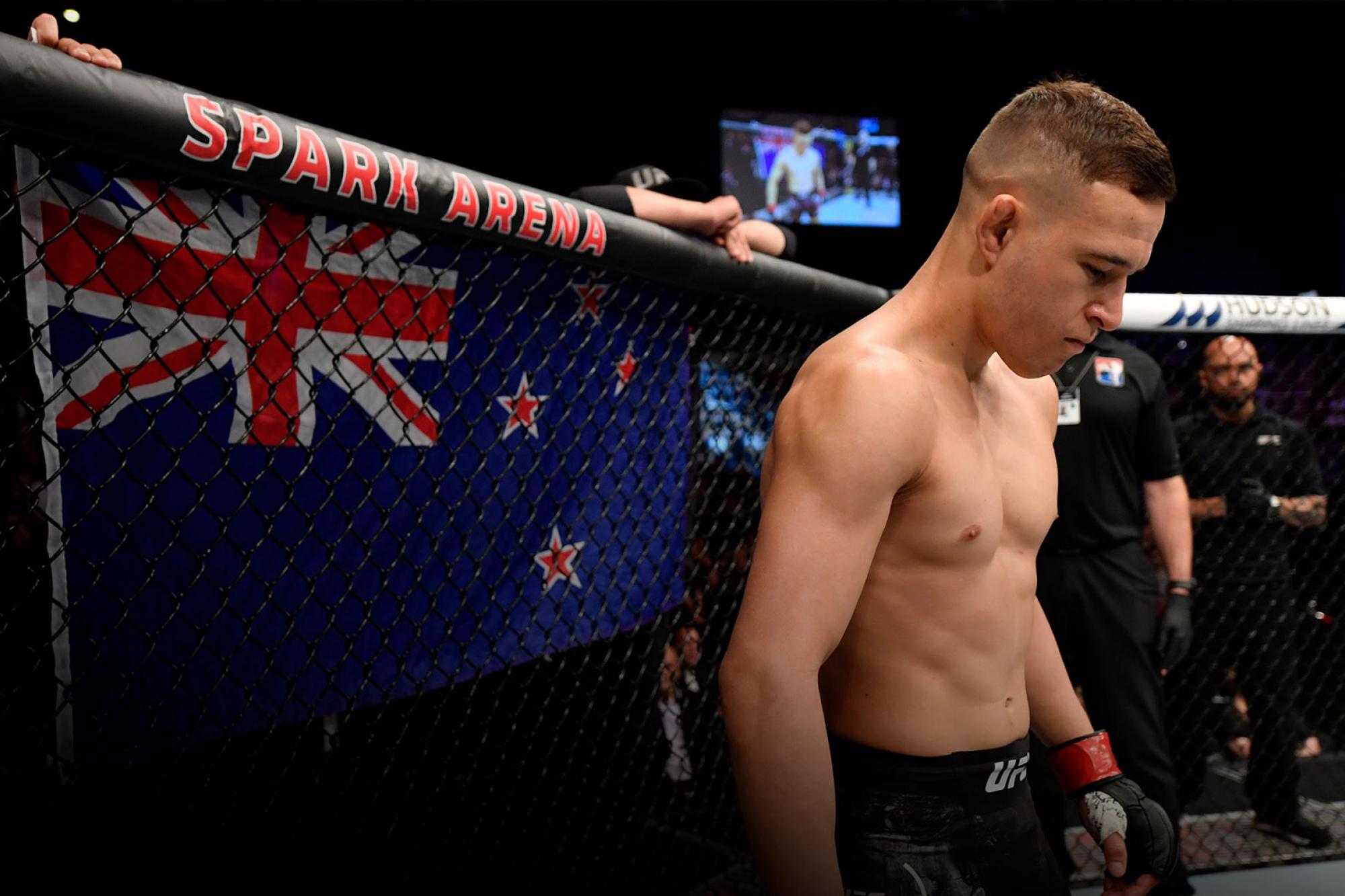 Fighting Is In Kai Kara-France's DNA

2020 isn’t working out at all like Kai “Don’t Blink” Kara-France expected. But the flyweight contender doesn’t plan on letting that stop him from making a statement against Brandan Royval at UFC 253.

“Fighting is in my blood,” he declares. “I was born for this. This year has been full of uncertainty, so with my fight camp, we just concentrated on what we could control and let everything else go.”

After the Covid-19 lockdown forced the UFC fighters from Auckland’s City Kickboxing to live in the gym together, there were reports it had only improved their preparation – and Kara-France agrees.

“It actually turned out to be one of my best camps. We used the lockdown to our advantage and got in some quality training. We were able to really focus on the details of our opponents, and now I’m 100 percent confident coming into this next fight.”

“We’ve done our homework on him,” explains Kara-France. “We are aware he’s legit on the ground. We know he’s got good hands and he’s young, long and rangy for the weight class – all of these things we’ve taken into account.”

“He won’t show me anything I haven’t seen before at our gym, training with guys like Israel Adesanya, Brad Riddell, Alex Volkanovski, Shane Young and Dan Hooker. That’s what gives me confidence.”

So what does Kara-France believe will be the deciding factor come fight night?

“I feel like the difference is going to be my experience. He’s coming off a win against a veteran, but I’ve been doing this at the top level for a long time.”

He’s got a point. When most 10-year-olds were still trying to master their BMX, Kara-France was already training in MMA. He turned pro in 2010 and earned a reputation outside of the UFC as a power puncher in a division sometimes lacking in KOs.

“I haven’t always had heavy hands,” reveals Kara-France. “But over time I’ve developed a style that suits me. Being able to lift heavy weights – I can dead-lift more than 200kg – definitely helps me sit down on my punches. Overall, though, I think it mainly comes from technique and accuracy. That’s what gets you those knockouts.”

Speaking of serious strikers, Kara-France wouldn’t say no to a bout against former UFC bantamweight champion Cody Garbrandt if the opportunity presented itself.

“I’d love to fight him. I know there have been mixed opinions about his drop to 125, but I think it’s good. The more eyes on this division, the better. But if he believes that by dropping down in weight, he’s going to be just running through smaller guys, he’ll find it doesn’t work like that,” warns Kara-France. “Just look at what happened when TJ Dillashaw fought Henry Cejudo.”

At the same time, “Don’t Blink” knows that his own rise up the rankings doesn’t leave any room for mistakes. “I want to eventually have a run at the world title,” he states. “I’ve just got to keep taking people out. I’m currently number seven and Royval is number 10. He wants my spot, and he’s got to kill me to take it.”

Fortunately for Kara-France, he and his three City Kickboxing teammates on the UFC 253 card – including 185-pound champ Israel Adesanya – will be receiving even more support than usual from their fellow Kiwis.

“At the moment, we’re about the only sports ‘team’ that’s able to leave New Zealand,” explains Kara-France. “So we have a lot of attention on us – especially from people who don’t normally watch MMA.”

The 27-year-old clearly loves representing his country, but also his weight class and, perhaps most importantly, his ancestors.

“I’m on the main card as a flyweight, so I feel like I’ve got a job to do and that’s be exciting and get a finish. I see it as a privilege. I’m also Maori and fighting just like my ancestors did. It’s in my blood. I didn’t choose this sport, it chose me!”

“I’m coming in with bad intentions,” confirms Kara-France. “I’ll be putting the pressure on every second and seeing what this guy is made of. It’s just another cage. He’s just another person. I want to make a statement. And, at the end, I see myself getting my hand raised.”