Fighters On The Rise: August 1 Edition

Take a closer look at three fighters poised to emerge ahead of their bouts on August 1's Fight Night
By E. Spencer Kyte, on Twitter @SpencerKyte • Jul. 26, 2020

Following an action-packed and eventful month-long stay on Fight Island, the UFC returns home to Las Vegas for another month’s worth of events at the UFC Apex, beginning with this weekend’s fight card.

The return home features a strong card from top to bottom, including a handful of fighters keen on taking the next step forward in their careers and using this fight card as their opportunity to break out and truly establish themselves with the UFC audience.

This is the August 1 edition of On the Rise. 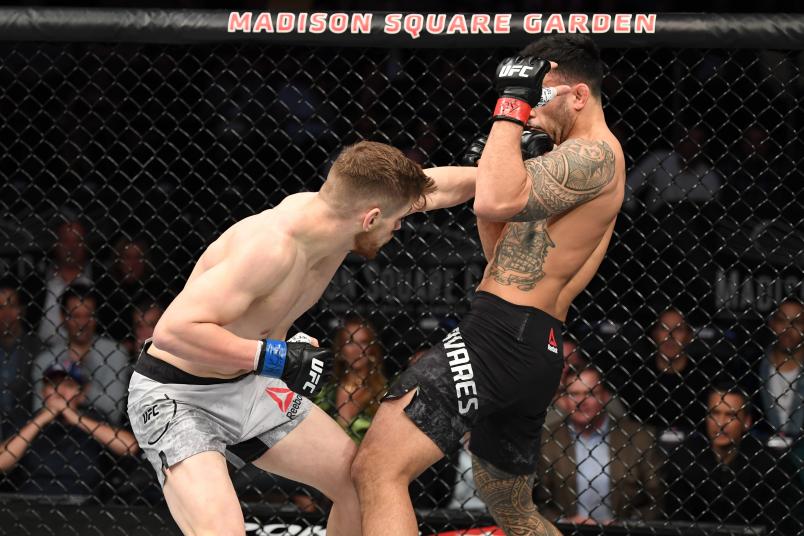 It’s rare that we have athletes competing in the final bout of the evening highlighted in this space, but this is one of those occasions where choosing anyone else would have been inexcusable.

Shahbazyan earned his UFC contract with a 40-second knockout win over Antonio Jones on July 17, 2018 as part of the second season of the Contender Series. Two years later, he carries a perfect 11-0 record that includes three straight first-round stoppage wins into a showdown with a Top 10 fixture in Derek Brunson who has more UFC appearances (16) than he has professional appearances.

The 22-year-old California native has lived up to his “Golden Boy” nickname and then some, handling his meteoric ascent with aplomb while turning in breathtaking performances against veterans Charles Byrd, Jack Marshman, and Brad Tavares over his last three outings.

His victory over Tavares was particularly eye-opening as the Ultimate Fighter alum has long been viewed as the tough, veteran out young stars need to get past in order to establish themselves as potential contenders. Current middleweight champ Israel Adesanya’s first main event assignment came against Tavares, with “The Last Stylebender” spending 25 minutes picking the Hawaiian apart.

Shahbazyan dropped him with a head kick halfway through the opening round.

Training out of the Glendale Fighting Club made famous by former champ Ronda Rousey, who manages him, Shahbazyan has the potential to be the gym’s second UFC champion. No, that is not hyperbole.

Shahbazyan has already shown that he’s technically and fundamentally sound, that he carries legitimate power and innate finishing instincts, and despite a ton of attention and constant jumps up the competitive ladder, he’s never seemed even the least bit rattled. And he’s only 22.

While there are others who get more attention or have a greater presence on social media, Shahbazyan is the best young fighter in the UFC (and the sport, for that matter) and it doesn’t feel particularly close. A win Saturday will not only serve to further confirm that but will also elevate the unbeaten rising star into the title conversation in the middleweight ranks.

It has never been about talent with Holland, the 27-year-old Texas resident who steps in for Junyong Park to take on Trevin Giles on Saturday night in Las Vegas. From his days on the regional circuit, through to the Contender Series, and on to the UFC, it has long been apparent that the “Trail Blazer” is a skilled prospect with an intriguing arsenal of weapons at his disposal.

What has occasionally been missing since his arrival on the UFC radar, however, is a combination of focus and killer instinct that had a way of diminishing Holland’s efforts, even when he emerged victorious. He’d talk trash and showboat, allowing opponents to stick around, and when you do that at the highest level, fights tend to be closer than you anticipate and the odd one can get away from you.

That appeared to change in his last fight, as Holland marched to the Octagon, charged across the cage, and stopped fellow Contender Series alum Anthony “Fluffy” Hernandez with a brutal knee to the body and follow-up punches in just 39 seconds back in May. It was the kind of dominant performance that Holland always seemed capable of delivering, but never previously seemed all that concerned about producing, which makes you wonder if it was an aberration or an indicator that his mindset has changed?

Saturday’s short-notice opportunity against Giles should provide further clarification about Holland’s approach as the former LFA standout has considerable power and quality finishing instincts, making him the kind of guy you don’t want to let hang around too long if you can help it. He picked up his first win in three fights since returning to action after pressing pause on his career to become a police officer last time out and will be looking to build off that effort here.

The middleweight division has been undergoing renovations for the last couple years, creating opportunities for someone like Holland to string together a few quality performances and vault into the Top 15. Trouncing Hernandez in May was a good start, and doing the same to Giles on short notice would be a perfect follow-up that would put the talented upstart in prime position to make a run towards the rankings over the final five months of the year.

Speaking with renowned striking coach Mark Henry over the years, Valiev’s name was one that always came up when talking about the elite talent he works with and how they all help each other get better. He was, in many ways, the unheralded member of the New Jersey collective affectionately known as “The Iron Army” — a talented fighter competing outside the UFC with a strong record, stellar credentials, and a group of world-class teammates and coaches who all sung his praises.

Saturday night, UFC fans get their first chance to see why Henry and the rest of the crew have always been so high on Valiev as he makes his first foray into the Octagon in a clash with Contender Series alum Jamall Emmers.

The 30-year-old Valiev is 16-2 overall and enters this weekend’s clash on a six-fight winning streak, which began when he avenged a split decision loss to Chris Gutierrez. In addition to going 1-1 in a pair of bouts with “El Guapo,” Valiev also boasts victories over veterans Ed West and Tito Jones, as well as upstarts Max Coga and Bekbulat Magomedov.

Saturday’s matchup with Emmers is a perfect introductory pairing for the promotional newcomer – an assignment against a fellow neophyte looking to find his way in the talent-rich featherweight division who has a little bit of experience against UFC talent, which helps establish a floor for grading out where Valiev fits going forward.

There have been a number of high-profile debuts in recent years and plenty of rookies who made a splash in their debuts; now we get to see if Valiev can do the same.