The fighter inside has brought the Bosse back to UFC 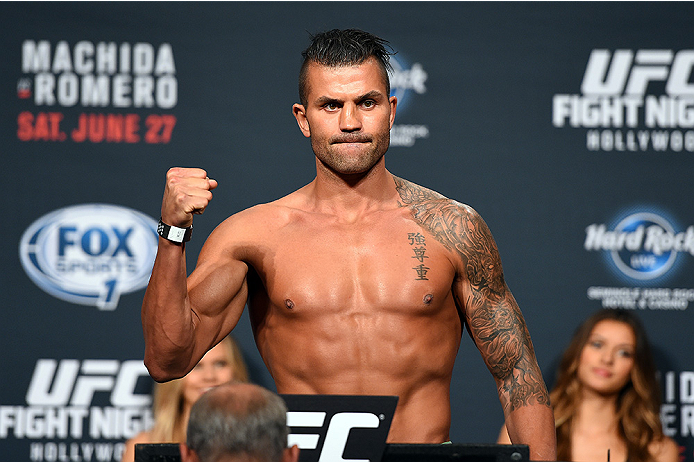 For a guy that has spent a tick shy of 30 seconds in the Octagon, Steve Bosse has had a pretty eventful UFC career.

Signed in the midst of an eight-fight winning streak, the French-Canadian powerhouse was tabbed to take on fellow Canadian Ryan Jimmo when the promotion debuted in Quebec City with The Ultimate Fighter: Nations Finale in April 2014. But shortly after inking his contract, Bosse abruptly retired, citing a persistent shoulder injury and the cumulative impact of a career forged by throwing hands.

“My shoulder and all my body were very painful,” explained Bosse, who racked up more than 1,000 penalty minutes in 150 games in the Quebec Men’s Senior Hockey League and the rough and tumble Ligue Nord-Americaine de Hockey. “At this time, I was thinking about my future and I made the decision to put my MMA career on the table to focus on my firefighter career. But the warrior inside me was still there and wanted to come back to training.”

A year later, Bosse’s curious tenure on the UFC roster continued when the former hockey enforcer was tabbed to fill in against Fabio Maldonado at UFC 186 in Montreal. That pairing lasted only a couple of days, as Maldonado’s original opponent, Quinton “Rampage” Jackson, was eventually cleared to compete, leading to Bosse taking part in the event’s Media Day proceedings despite not having a fight to discuss.

Ultimately, the now 34-year-old knockout artist got the opportunity to cross the threshold into the Octagon, squaring off with Thiago Santos last June in Hollywood, Florida, fulfilling a dream he shared with fighters everywhere. Unfortunately for Bosse, the fight couldn’t have gone any worse.

Almost as soon as the cage door shut, Santos started attacking with kicks. First he went low, connecting with an inside leg kick, before driving home a heavy kick to the midsection. Seconds later, Santos went upstairs, putting shin to temple and sending Bosse crashing to the canvas in a static position, completing one of the nastiest knockouts of 2015.

“'All the MMA fighters’ dream is to one day fight in the UFC cage,” he said, “but for me, my first UFC fight, I lost by a big knockout – the biggest knockout that ever happened to me.”

Now Bosse is primed to return and add a new chapter to the story of his UFC career, making the trip to Brisbane to share the cage with James Te Huna, who returns to action for the first time in 21 months.

“I have nothing to lose,” Bosse, who holds wins over UFC vets Wes Sims, Marvin Eastman and Houston Alexander, admitted. “After my first UFC fight, (it was the worst outcome possible), so now I just want to prove who I am and what I can do in the UFC cage.

“I just want to come back with this and show around the world ‘Who’s The Boss’ and what I can do.”

After building some buzz with four straight wins, New South Wales’ Te Huna resident hit a rough patch, dropping three straight to Glover Teixeira, Mauricio Rua and Nate Marquardt in his middleweight debut. Having missed all of 2015 due to injury, the heavy-handed Australian jumps back into the cage this weekend, fighting 10 hours and change up the Pacific Motorway from his hometown, looking to halt his skid.

That sense of urgency has Bosse excited about the matchup and promising fireworks Saturday night inside the Brisbane Entertainment Centre.

“Oh man, I’m here to make a really good show,” he said. “I know James is in his hometown and wants to give a good show too. He’s on a three-fight losing streak, so he needs that win and I need that win so it’s going to be a good fight for sure.”

Having gone down one of the strangest, most circuitous roads to the Octagon and having landed on the wrong side of a walk-off knockout loss in his promotional debut, Saturday is Bosse’s chance to add a happier chapter to the chronicle of his UFC career.

But “The Boss” isn’t thinking that far ahead. All he’s thinking about is throwing hands with Te Huna and thrilling the fans this weekend.

“I’m just focused to win and to brawl with him.”