Fate and the Journey of Kamaru Usman 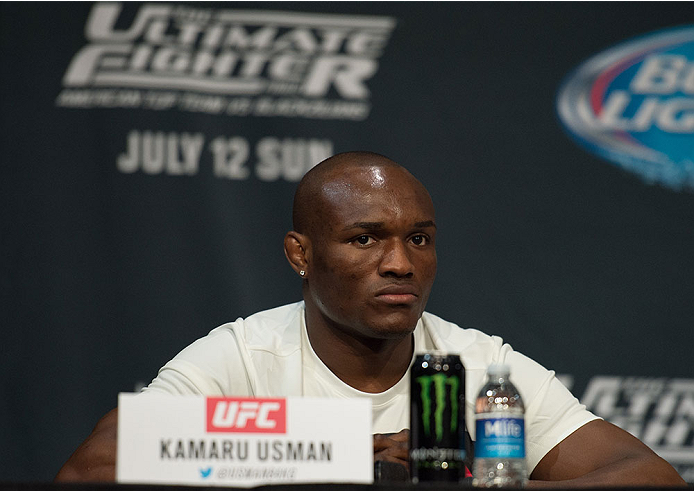 Kamaru Usman was never going to go on The Ultimate Fighter. As a promising welterweight with the Blackzilians in south Florida, he had the talent and connections to get to the UFC without a boost from the reality show, and after serving as a wrestling coach for Jason “Mayhem” Miller on season 14 of TUF, he looked around and figured that six weeks locked away from the world just wasn’t for him.

“I said I would never do a TUF season as a competitor,” Usman laughed. “And lo and behold, this opportunity comes up and Glenn, my manager, is like ‘hey, we’ve gotta do this.’”

Glenn is Glenn Robinson, founder of the Blackzilians, and when the opportunity came for him to put his squad against their Florida rivals, American Top Team, on season 21 of the show, he called in his big guns at 170 pounds. Usman was one of them, and the 28-year-old got on board.

“I said this is for my team, for my family, and also for myself, so I’ll do it.”

On Sunday, following a tumultuous season that included two wins over Steve Carl and Michael Graves, Usman is the man Robinson is sending into battle against ATT’s Hayder Hassan with $300,000, the season trophy, and bragging rights on the line. It’s the most intriguing TUF finale bout in years, and one Usman believes “was built by fate, to be honest, even though I know that sounds a little cliché.”

It’s not, because from the first days of the competition, Usman and Hassan appeared to be on a collision course. The “Nigerian Nightmare” believes it started even before that.

“I’ve been in MMA for almost three years,” he said. “All three years, I never saw Hayder Hassan one time. Never. I just heard of him about five months before we started taping the show. He fought a teammate of mine, Felipe Portela. I saw him in that fight and yes, he got the knockout, but I saw some ways that I could capitalize and beat this guy. And that was just watching it on TV. Then two days before the show, I run into him for the first time ever. He was in my neighborhood. He leaves my neighbor’s house, he sees me, I see him, and I know him. He goes ‘Hey bud,’ gets into his car and drives off.

“Then we go in the house, and after the first fight, this matchup was built,” Usman continues. “I knew this was gonna happen and I don’t think there’s a fight that people want to see more than this. He’s been running his mouth since the first fight, and it has to be my job to go in there and shut it for him.”

There is certainly no love lost between the two, and that’s been the focus ever since the bout was announced earlier this week. So if you’re talking about takeaways from the reality show experience, that’s the place most would start, but Usman took even more than that from his six weeks in the competition.

“It’s a great thing to go through to really decide if this is what you want to do for a career,” he said. “A lot of guys have never been in this type of atmosphere where you have to fight maybe two or three times in such a short span. And luckily for me, being a wrestler, it was something that I was used to, so it wasn’t that traumatic of an experience. But all in all, it’s still an experience that I believe that to be a UFC fighter, you kind of need to go through, or at least something similar.”

So does he want to stick around in this crazy game?

“Yeah, definitely,” he laughs, even though this probably wasn’t where he saw himself ending up athletically. A native of Auchi, Nigeria, Usman and his family moved to the United States when he was seven years old, and like any youngster here, he gravitated to sports like football and basketball, and not to the sport his parents endorsed, soccer.

Eventually, Usman found the wrestling room, and he never left, even though his parents weren’t too thrilled initially. They came around when they saw how good their son was, and he went on to earn All-American status three times for the University of Nebraska at Kearney and pick up a Division II National title in 2010. The Olympics were next on his hit list, but then he hit a wall.

“I started experiencing a lot of different injuries and it was something that started to hurt my motivation,” he said. “At that level, there’s only a slight advantage that separates the Olympic champion from the guy who took 12th. I was starting to lack in that area of motivation with all the injuries I was sustaining. So MMA was something that I’ve always been looking at because I had teammates in college such as Joe Ellenberger that did it. This was the next avenue and this is the place where I really want to go and pursue my career.”

Six pro fights in, he’s got five victories, a rock-solid training partner and mentor in former UFC light heavyweight champion Rashad Evans, and a UFC debut on Sunday. Not bad Mr. Usman, not bad at all.