Read on for a list of Dong Hyun Kim's most important UFC victories... 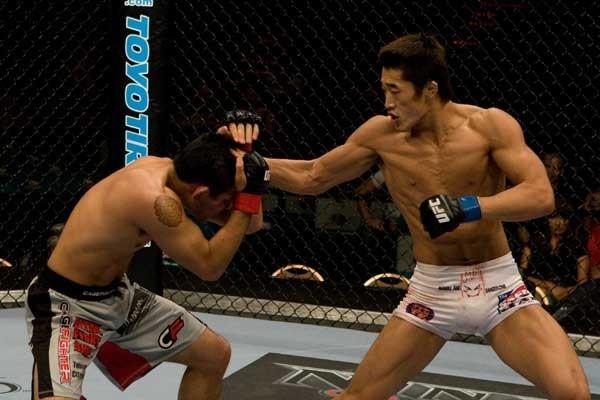 Winner of eight UFC bouts since making his Octagon debut in 2008, South Korea’s Dong Hyun Kim has long been one of the most underrated welterweights in the world, a situation that may change considerably should he defeat Erick Silva in impressive fashion this Wednesday in Brazil. Can the “Stun Gun” do it? As the below fights show, he is no stranger to coming up big when he needs to.

Jason Tan – May 24, 2008 – UFC 84<br>Result – Kim TKO3
Only the second Korean fighter to compete in the UFC, Dong Hyun Kim opened the door for several of his countrymen to enter the Octagon, and it all started with this third round TKO of England’s Tan. This was a big deal for fans in South Korea and Kim delivered, showing off the style that would overwhelm several opponents in the future. Surprisingly, it remains his only stoppage win in the UFC.

Matt Brown – September 6, 2008 – UFC 88<br>Result – Kim W3
Fresh off his stint on The Ultimate Fighter, Matt Brown wasn’t yet showing the form that has resulted in his recent six fight winning streak, but it is key to point out that after “The Immortal” lost this razor-thin split decision to Kim, he went on to win three straight, all by finish. As for Kim, it wasn’t his most impressive victory, but in outlasting Brown, he showed off the chin and resilience that would become his trademark.

Nate Diaz – January 1, 2011
Result – Kim W3
Using a smothering ground attack that always began with his nearly unstoppable takedowns, Kim snapped rising star Diaz’ two fight welterweight winning streak while pushing his own unbeaten slate to 14-0-1 with 1 NC. By now, Kim had yet to lose in six Octagon outings (a split decision loss to Karo Parisyan at UFC 94 was overturned to a no contest), and he was starting to get recognition as a serious 170-pound threat.

Paulo Thiago - November 10, 2012 – UFC on FUEL TV
Result – Kim W3
After such a strong start to his UFC campaign, Kim’s rise hit a couple roadblocks when he lost two of his next three, getting knocked out by a Carlos Condit flying knee at UFC 132 and suffering an injury-induced loss to Demian Maia at UFC 148. In between, he won a three rounder over Sean Pierson, but his November 2012 matchup with Paulo Thiago was going to be a pivotal one to keep his championship hopes alive. In response, Kim put together an impressive and dominant three round decision win to begin the road back.

Siyar Bahadurzada – March 3, 2013 – UFC on FUEL TV
Result – Kim W3
Given the fact that he doesn’t speak English, you don’t get too much in the way of trash talk from Kim. But when an interview Kim conducted about his fight against Siyar Bahadurzada got translated into English, with “Stun Gun” saying he didn’t know who the Afghan knockout artist, it added a new level of intrigue to the bout. But as soon as the bell rang, Bahadurzada was unable to make Kim pay for this perceived lack of respect, as the Busan native again used a smothering ground attack to win a clear three round unanimous decision. Now it’s off to Brazil and Erick Silva.