Cain Velasquez had plenty of iconic moments in his legendary career. Here are five of his best:
By E. Spencer Kyte, on Twitter @spencerkyte • Sep. 28, 2020

Former UFC heavyweight champion Cain Velasquez has always embraced his Mexican heritage, the connection he feels to his roots, and how proud he is of where he comes from.

As the UFC celebrates Hispanic Heritage Month, here is a look back at five key performances in the career of Cain Ramirez Velasquez. 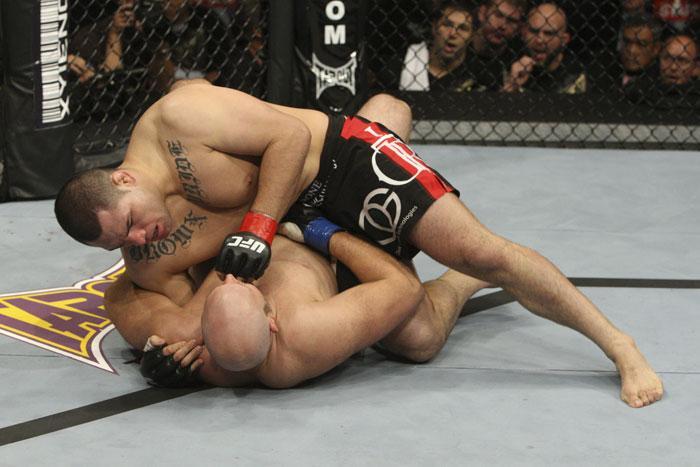 Velasquez was six fights into his professional career and coming off his first decision win over divisional stalwart Cheick Kongo. It was the first time the former Arizona State wrestler had struggled even a little, and made many people wonder if it was time to pump the brakes on the undefeated prospect’s rapid rise through the heavyweight ranks.

Pairing him off with Rothwell in the co-main event of UFC 104 in Los Angeles was meant to be a litmus test for Velasquez, as “Big Ben” made his first walk to the Octagon sporting a 30-6 record that included a dominant run under the IFL banner and victories over established heavyweights like Roy Nelson and Ricco Rodriguez. He was a respected professional viewed as a stern test for the promising upstart and how the fight played out would have a significant impact on how quickly Velasquez continued to work his way up the divisional ladder.

Less than 30 seconds into the fight, Velasquez dumped Rothwell to the ground, swarming the veteran with the suffocating pace that became his signature approach. Every time Rothwell worked back to this feet, Velasquez would dump him back to the mat, and when they stayed upright, it was the youngster leading the dance, taking the fight to the savvy, well-schooled veteran.

It was a dominant performance from start to finish, which came just 58 seconds into the middle stanza of this three-round affair.

Battering Kongo but failing to finish him made folks question Velasquez’s power and ability to put away more seasoned foes. Four months later, the blue-chip standout ran through Rothwell to make it clear that he was ready to wade into the deep end of the heavyweight talent pool. 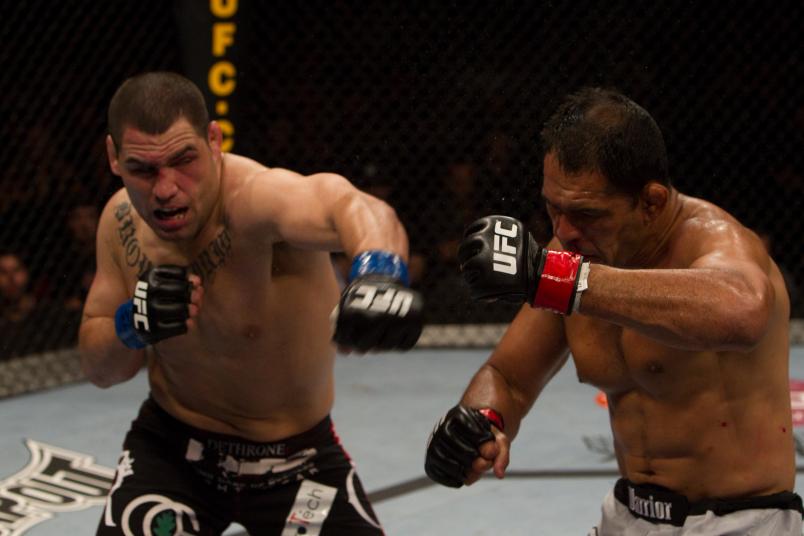 Four months after dispatching Rothwell, Velasquez landed his first headlining assignment as the UFC made its first trip to Australia, stationing the rising star opposite one of the most respected veterans in the game, Antonio Rodrigo Nogueira.

One of the top heavyweights in the history of the sport and a former interim UFC champion, “Minotauro” was six months removed from his victory over Randy Couture in one of the best fights of 2009 and was 8-2 over his last 10 appearances. If the fight with Rothwell was to determine if Velasquez was ready to swim with the sharks, this bout was set to show whether he was ready to challenge for the UFC heavyweight title or not.

It took Velasquez just over two minutes to answer that question in resounding fashion.

From the jump, his speed advantage and the diversity of his striking arsenal were obvious challenges for Nogueira, who got stung with a couple stiff shots early and struggled to answer whenever Velasquez stuck a jab in his face or crashed home another kick. When Nogueira stepped forward with a reaching jab, the unbeaten American Kickboxing Academy product uncorked a two-piece combo that put the Brazilian legend on the canvas in a flash.

This was a blistering performance from a frighteningly good emerging star, one that left you wondering when, not if, Velasquez would ascend to the heavyweight throne and how long he would reign over the division. 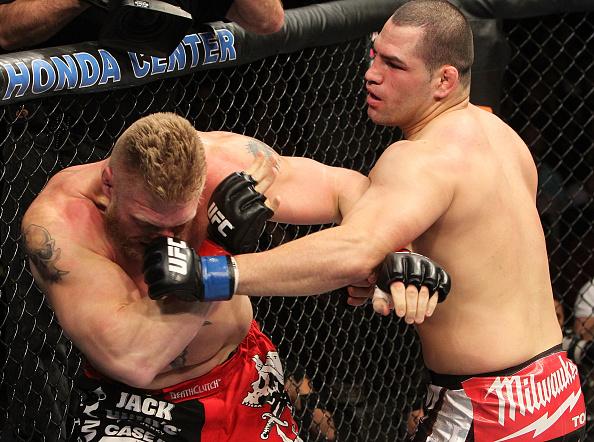 It’s difficult for some people to comprehend what a menacing figure Brock Lesnar was during his time in the Octagon because they cannot separate the professional wrestler from the UFC heavyweight, but make no mistake about it: Lesnar was (and still is) a physical specimen with freakish athleticism who took to the sport with astonishing ease and quickness.

At UFC 121, Lesnar entered as the reigning UFC heavyweight champion, fully intent on defending his title against the undefeated challenger.

Lesnar shot out of the corner like he was launched out of a cannon, trying to take the fight to Velasquez and get him out of there before he could settle into a rhythm. He bull-rushed him, trying to take him down and maul him early, but the challenger weathered the storm. When Lesnar put him on the canvas, Velasquez got up quickly, and when they separated into space with just over three minutes remaining in the round, the young standout took over.

Lesnar was tired, throwing labored single shots that Velasquez avoided with ease and countered with combinations, creating an opportunity for the challenger to close the distance and put the champion on the ground. A tired Lesnar telegraphed a takedown attempt and was sent stumbling across the cage off balance when Velasquez shrugged him off, only to come face-to-face with a fresh, attacking challenger when he regained his balance along the fence.

A knee up the middle sent Lesnar tumbling to the canvas and from there it was academic, as Velasquez passed his legs, climbed into side control and unleashed a torrent of strikes that forced the bout to be stopped.

A new champion had emerged, and he looked poised to rule the division for an extended period of time.

Velasquez lost the heavyweight title a little over a year after claiming it from Lesnar without having defended the belt, and this was his first appearance since losing the title to Junior Dos Santos in November 2011. After looking unbeatable during his nine-fight rise to the top of the division, a single clubbing blow ended his reign before it really began, and now people wanted to know how the former champion would respond.

Silva was a formidable test — a monster of a man who had previously bludgeoned Russian icon Fedor Emelianenko and the kind of dangerous foe who could make just about anyone look bad if they were to take him lightly. No one knew how Velasquez would perform after suffering his first defeat and, on paper, “Bigfoot” was a stout challenge for the returning former champion.

Velasquez had Silva on his back in the center of the Octagon just eight seconds into the fight after catching a kick and dumping the Brazilian to the mat. The only time he would get back up is when the bout was momentarily paused to check the status of the cut that was leaking blood all over his face.

This was a savage mauling that made it abundantly clear that the only thing Velasquez’s loss to Dos Santos did was motivate the former champion to get healthy and get his title back. He made Silva look like he had no business being in the cage with him and left him glistening with crimson on a Pollock-esque canvas by the time the fight was mercifully halted, setting up the championship rematch everyone wanted to see. 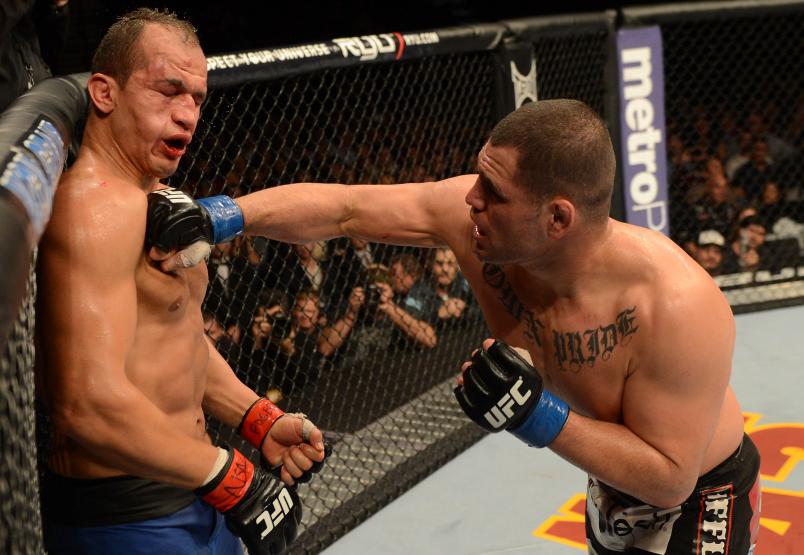 Junior Dos Santos needed just over a minute to put away Velasquez in their first encounter, catching the champion with a clubbing right hand behind the ear that put him on the deck and made the Brazilian the new UFC heavyweight champion. He looked tremendous in successfully defending his title against Frank Mir the same night Velasquez mauled Silva, and the uncertainty of what would transpire when these two hit the Octagon for a second time made it one of the most highly anticipated clashes in quite some time.

Velasquez came out pushing a breakneck pace and was a little too aggressive early. He was reaching on takedowns and leaving himself open to counters as he marched forward, but after a couple minutes of frenetic action, it was clear the champion was winded and the challenger was just getting started.

What began as a coin-flip fight between two incredible talents quickly became a one-sided drubbing, where Velasquez maintained his torrid pace and put a beating on Dos Santos, chipping away minute-by-minute, changing Dos Santos’ complexion with a steady diet of short, punishing blows. Velasquez dropped the titleholder late in the first round and never let off the gas, never allowing “Cigano” to have a moment to rest or initiate any offense of his own.

The fight went the distance, but the outcome was never in doubt after the opening three minutes. Velasquez suffocated Dos Santos for the final 22 minutes of the fight to reclaim the title and draw even in their personal series, re-affirming his standing as the top heavyweight in the world.