The Evolution of Pat Barry

"There is going to be a lot of magic tricks happening in this fight, just
to see who can fool the other guy, because whoever gets fooled first is
going to be the one who loses." - Pat Barry 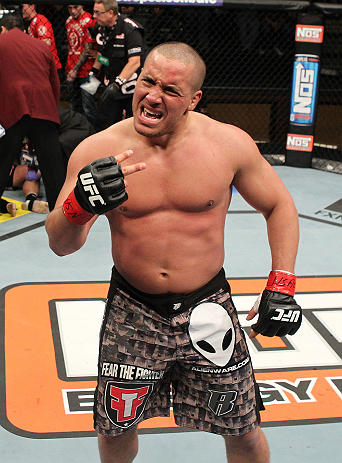 Most fighters competing at the highest level in the sport will tell you that their sights have been set on becoming a champions since long before they got the call to join the UFC roster.

Fighting on the regional circuit, the opportunity to step into the Octagon serves as motivation, but envisioning Dana White wrapping that 12 pounds of leather and gold around their waist is the ultimate goal, fueling training sessions and standing as the answer every time they ask themselves, “Why am I doing this?”

The charismatic UFC heavyweight is a cult hero amongst fight fans; a highly accessible, easy-to-like competitor who wears his heart on his sleeve and leaves it all in the cage, each and every time he fights.

Through his first 10 trips into the Octagon, the New Orleans, Louisiana native has amassed a 5-5 record. He’s yet to win back-to-back contests, and yet he’s a main card fixture, a testament to his exciting style and penchant for delivering memorable moments in victory or defeat.

Unlike his contemporaries, Barry’s primary motivation was to entertain, not chase championship dreams.

“I’ve never said this out loud anywhere else, but up until this last year, I really never had any intentions of being the champ,” admits Barry. “The thought never crossed my mind. I didn’t ever really think that I could be champion.”

Barry splits his training camps between working with Greg Nelson at The Academy in Minneapolis, Minnesota and sharpening his striking under the watchful eye – and maniacal smile – of Trevor Wittman at the Grudge Training Center in Denver, Colorado.

For months on end, the affable 33-year-old heavyweight listened to Nelson and Wittman tell him that he was capable of rising through the ranks, and challenging for championship gold, but he wasn’t buying in.

All that changed following his victory over Shane Del Rosario at The Ultimate Fighter 16 Finale in December.

“As long as I knew that I went in there, and I performed to my best, did what I had to do, win or lose, I was fine with it,” says the 8-5 Barry of his prior mindset. “Now, after the Shane Del Rosario fight, it was like `This s*** is real! This s*** is really happening!’

“Those two guys have convinced me more than I have ever been before, to the point that I actually think I could make a run for it. They’re sure that I can, and I’m starting to believe more that I can, not just `Oh I’m in the UFC; I’m gonna be champion” just going along with it and saying it for the sake of saying it. Over this last year or two, I’m kind of more starting to believe it.”

On paper, the win over Del Rosario doesn’t look all that different from Barry’s previous UFC wins, but it’s what transpired before he finished the former Strikeforce prospect just 26 seconds into the second round that made him a believer in what Wittman and Nelson have been telling him on a constant loop whenever he’s in the gym.

If you asked anyone to identify Barry’s personal brand of kryptonite, they’d tell you his ground game is suspect, citing his three submission defeats as evidence. That’s why Del Rosario spent the early portion of the opening round trying to drag Barry to the canvas, and he worked diligently to find a finish once he got the compact heavyweight kickboxer on the ground.

But Barry defended, made it to the end of the frame, and rocked Del Rosario with a thunderous left hand moments after his coaches were ushered out of the cage to start the second round.

Since then, everything has changed.

“I’m not okay with missing a practice,” says Barry in a tone that makes it clear the humorous heavyweight is 100-percent serious. “I’m not okay with not doing well on a certain day or not pushing myself to the limit. It’s gotten a pinch more stressful, but a good stress because on days when…”

He paused, searching for the right example to properly convey just how much his outlook has shifted.

“Say we’re running up a hill. If I don’t climb up the hill as hard as I can, get to the top, pass out and die, I find myself being upset with myself because that’s not what champs are made of. Champions don’t half-ass it.

“If they believe that I can do this,” he continues, they being Wittman and Nelson, “then I have no reason to not swing for the fences. It has changed my future plans. Instead of “if I lose and they cut me, it’s on to the next step,” that’s not an option now.

“Not that it’s impossible for them to cut me. S*** could still happen. Shawn could be a mutant by the time Saturday comes around, but to be instantly okay with it isn’t there any more.”

“Shawn” is former LSU fullback-turned-UFC prospect Shawn Jordan, the man he’ll share the cage with this weekend at the MTS Centre in Winnipeg, Manitoba as the opening act on the UFC 161 Pay-Per-View.

From the moment the fight was announced, fans have envisioned a first-rate heavyweight slugfest, with good reason – all but one of Barry’s 10 UFC appearances have ended in a stoppage, while Jordan has 13 finishes on the way to amassing a 14-4 record.

Outside of the cage, the soon-to-be combatants are friends, not that it’s going to change the way “Hype or Die” plans on approaching things this week.

“It’s like going outside and playing a game of pick-up basketball or seeing who can throw a rock the farthest,” says Barry. “If I can throw a rock further than you, and that upsets you to the point that you don’t want to be my friend any more, that’s stupid. We’re not friends anyway.

Friends or not, Barry knows that he and Jordan are both looking at this fight as a golden opportunity. No heavyweight is ever more than a couple good wins away from being in the mix at the top of the weight class, and with their explosive and entertaining styles, a victory for either man could propel them to new heights in the heavyweight ranks.

Heading into previous bouts, the easygoing two-time Fight of the Night winner had a habit of downplaying the importance of his upcoming bout, and would rarely get overly analytical about his impending matchup.

Sure, there were stylistic elements to be considered, but stripped to its core, this was simply two heavyweights intent on punching each other in the face. As much as that base assessment holds true, Barry’s altered thinking about his career prospects has also prompted him to be more forthcoming with his thoughts about his opponents, and he’s well aware of the dangers Jordan will pose when the cage door closes.

“Before I made this transition to actually doing this, I would have said, `Just another heavyweight fight. Another big dude, we’re gonna hit each other, somebody’s going to die.’ That would have been the nonchalant response that I would have given, but not now. Shawn is dangerous. Shawn is a former football player, he wrestled a little bit, and he’s got 10 knockouts. He’s gutsy, he takes chances, and he’s jumping around the cage.

“He’s as wide as he is short, and the dude can do a standing backflip,” Barry blurts out, equal parts annoyed and impressed by his friend’s athleticism. “There are plenty of challenges in this fight.  Who’s faster? Who’s more accurate? Can I stop the bum-rush? Is this a takedown or is this an overhand left to the brain?

And how does Barry plan on fooling Jordan on Saturday night?

“Pretend to throw a sandwich in the air? I don’t know,” he laughs. “Shawn is not just a big dude and that’s it; he’s skilled, he’s tricky, and he’s ridiculously explosive. He’s mysteriously fast, and he’s heavy-handed. If anything lands, it hurts.

“Personally, this is going to be the kind of fight I would like to watch.”