"It should be an interesting fight. But I see myself winning any way that I have to, whether it’s by knockout or submission.” - Darren Elkins 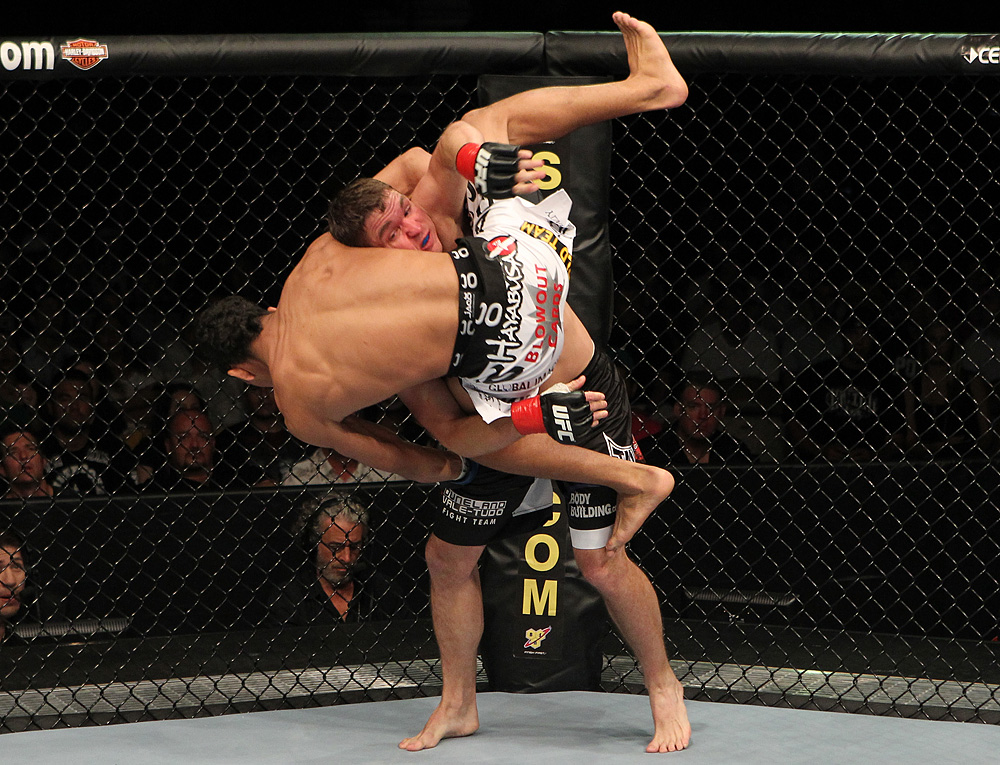 Vancouver, British Columbia, is part of Darren Elkins’ not-too-distant past. The Indiana pipefitter fought in the Great White North back in 2007, making quick work of a Japanese fighter named Asuhiro Tsuboi.

Elkins’ encore trip to Vancouver comes this week when he clashes with hard-nosed featherweight Michihiro Omigawa on the undercard at UFC 131.

“It’s the same scenario pretty much,” said Elkins, architect of a 12-2 pro record (1-1 in the UFC). “I’m back in Vancouver fighting another Japanese fighter.”

There is, of course, a night-and-day difference in the caliber of opponent this time around. Tsuboi was a substandard 5-9-2 when Elkins dominated him. Omigawa (12-9-1), a decorated black belt judoka set for his fourth trip inside the Octagon, is much more formidable. He has toppled a handful of “name fighters”: He’s one of only two men to defeat Marlon Sandro; he bested highly regarded featherweight Hatsu Hioki, and toppled L.C. Davis, Hiroyuki Takaya and Nam Phan. In fact, since 2008, Omigawa’s stock has climbed considerably with an impressive 8-3 streak. Even in defeat during that span, no one has been able to finish him.

“I rediscovered the style that I’m good at after I went down to featherweight,” Omigawa, a former 155-pounder, said through a translator. “Every single fight is for life to me. I never want an easy opponent. The only thing in my mind is how to beat the opponent in front of me. No fight is ever easy.”

As for Elkins, Omigawa regards him as a “very well-balanced fighter” but isn’t shy about sharing his vision for the bout’s outcome.

“I will win the fight,” Omigawa vowed. “It’s not about my opponent. If I can show everything that I have then victory will follow for me.”

It would be a first in his UFC career. Omigawa has fought valiantly inside of the Octagon against No. 1 contender Chad Mendes, and lightweights Thiago Tavares and Matt Wiman. But Omigawa has yet to have his hand raised in the UFC and Elkins refuses to give him that satisfaction.

“He’s a judo guy with pretty good submissions off his back,” Elkins said of Omigawa. “He wins a lot of his fights by taking guys down and grinding them out by decision, but he likes to bang, too, and he hits really hard. It’s a tough fight. I think it will be hard for both of us to take each other down, so it should be an interesting fight. But I see myself winning any way that I have to, whether it’s by knockout or submission.”

A former high school state champion wrestler in Indiana, Elkins credits wrestling with keeping him out of trouble. Wrestling also helped him cope with peers who bullied and insulted him because of a speech impediment and crooked teeth.

“My parents always taught me to stand up for myself. They told me, ‘Don’t let anybody pick on you or beat you up,’” Elkins said. “My teeth were real crooked as a kid and I had a really bad speech problem so it was hard to understand me. A lot of kids tried to pick on me and make fun of me. My reaction was to show how tough I was and make an example of out of the person who was picking on me. And then somebody else would pick on me and I’d do the same thing until they decided, ‘Hey, I don’t want to mess with this guy anymore. He’s going to shut me up.’

“It stopped around middle school because by then I got braces, changed schools and made new friends and I had become a dominant wrestler and a lot of people didn’t want to mess with me then. I started to become real comfortable with myself.”

Elkins, 27, has an interesting side gig when he’s not training or fighting.