Edson Barboza: The Prospect Looking to Become a Contender

"I don’t think about any pressure. But I know I am getting better and I can show much more inside of the Octagon." - Edson Barboza 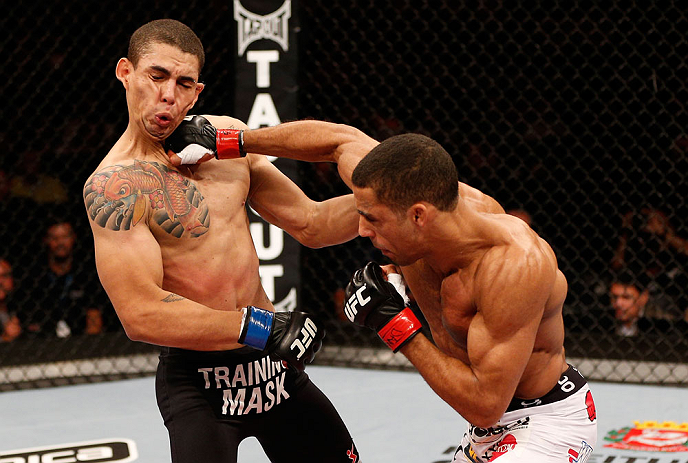 As a fighter makes the transition from prospect to contender, adapting to a rapidly changing environment is a major part of the game.

The talent level of the competition increases. A fighter’s profile and visibility shifts into a higher gear. And the bar rises on the expectation of performance inside the cage. While the transition can be difficult for some fighters to handle, the process is a necessary stage if a fighter hopes to rise into the championship realm.

For surging lightweight Edson Barboza, the lessons learned along the way have made all the difference.

The 27-year-old Brazilian earned his entry into the UFC after building a buzz on the East Coast regional circuit. With six consecutive victories, all coming by way of stoppage, the talented young striker hit the sport’s biggest stage with solid momentum at his back.

Once inside the Octagon, Barboza continued to roll as he picked up wins in his initial four showings under the UFC banner, including a devastating knockout of Terry Etim at UFC 142 in January of 2012. The spinning wheel kick soul-eraser Barboza put on Etim became an instant classic and earned “Knockout of the Year” honors as well.

The highlight reel knockout ignited talk of Barboza becoming the “next big thing” in the lightweight division, but his ascension up the ranks would soon take a detour.

In an unexpected turn, the surging young talent suffered a shocking upset loss to former WEC lightweight champion Jamie Varner at UFC 146 in May of 2012. Barboza was a heavy favorite going into the tilt, and with Varner having struggled to keep his career afloat in recent years, the bout appeared to be the perfect setting for Barboza to climb another rung on the ladder.

While that plan may have been suitable for Barboza, Varner had other plans. The 28-year-old Arizonan shocked the MMA world by scoring a knockout victory over the rising prospect and re-invented his career in the process.

The loss was the first of his young career, but rather than hang his head pining over a rough night inside the cage, Barboza took what he could learn from the experience and moved along his way.

“The motivation that fight gave me was that I want to be better,” Barboza said. “I want to be the champion.”

He would put those lessons to good use in his next showing as he bounced back in impressive fashion by stopping Lucas Martins in the first round of their clash at UFC on FX 8 in January. The win put the wind back in Barboza’s sails and he prepared himself for the next step of his journey against John Makdessi at UFC 162.

Unfortunately the TriStar product suffered an injury in training leading up the bout and now Barboza will be looking to keep the progression rolling when he steps out against Rafaello Oliveira this weekend at UFC 162 in Las Vegas.

“No problem…it happens,” Barboza answered when asked about the opponent switch-up. “Training to fight is hard and it can happen to anyone. My last opponent changed as well. My opponent changed, but my training continued as hard as it was already. My focus is the same.”

A large factor in Barboza’s continued progression as a mixed martial artist comes in his work with the likes of Renzo Gracie and Ricardo Almeida. Training under the MMA legend and with his accomplished staff of coaches, as well as former lightweight champion Frankie Edgar, Barboza has built off an impressive striking skill set to become a well rounded mixed martial artist.

“It’s awesome,” Barboza said. “Training with these guys, I have been learning something new every single day. It’s great the way that I am able to improve my game training with them. Since the first day I trained with them I felt like I was at home. They welcomed me into the team. Mark Henry, Ricardo Almeida and Renzo Gracie are great coaches and people. I am so happy to be a part of the team.”

With the goal of becoming champion in mind, Barboza will have to defeat Oliveira this weekend in order to stay in stride with the pack in the lightweight division. Over the past four years, the 155-pound weight class has risen to become one of the most competitive under the UFC banner.

While there is obvious pressure surrounding a prospect like Barboza to continue to impress and rise up the ladder quickly, the Brazilian knockout machine keeps the outside distractions out and locks his focus on the task at hand.

“I don’t think about any pressure,” he said. “But I know I am getting better and I can show much more inside of the Octagon. There are a lot of great fighters in the division running to the top and looking forward to getting the belt. I am one of those fighters who want the belt. This is what I am looking forward to.”