"I’m just gonna go in and fight my heart out and I’m not even looking at
losing as an option right now. I’m hungry for a win and that’s all I’m
looking at." - Dustin Pague 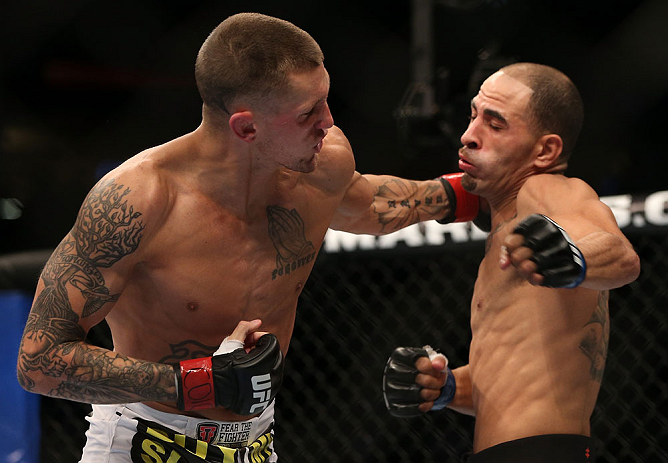 For the length of his UFC career thus far, Dustin Pague has seemingly been on one long road trip. Whether it was six weeks in the Ultimate Fighter 14 house in Las Vegas or camps everywhere from New Mexico to Virginia to Texas, Pague did what he felt he needed to do to make it as a pro fighter on the highest level of the game.

But with a son – Asher – welcomed into the world by Pague and his wife Jackie last December, and the rigors of being away from family growing harder and harder, the bantamweight made a bold move – he went home to Harrisburg, Pennsylvania.

“I think me and my wife having our first child, it was just really hard being away,” said the 26-year-old, who faces newcomer Kyoji Horiguchi at UFC 166 in Houston this Saturday. “We want him to be raised around his grandparents and his cousins, that’s how we were raised, and it was just really tough being away from family with him. For the last four years of my life it was a phone call or a weekend trip home, and when we were out in Texas, it was FaceTime. So it feels really good now. I’m at peace and I finally feel at home.”

That’s good news for the Pague family, and for the young father. But for Dustin Pague the prizefighter, it was a risky move. With a 1-4 record in the UFC, Pague is most definitely behind the proverbial eight ball heading into this week’s fight, even if a couple of those losses came via disputed split decisions, and one on just six days’ notice. So to make a major move like this before what could be the most important fight of his career could have been disastrous. But as he tells it, after some pre-move research, he found the training he needed to get ready for Saturday night.

“I had a great train-up for this fight,” said Pague, who has been working with Jeff Smith and the Unrivaled Athletics team. “My body’s healthy, I had some really good training partners, and a lot of guys that don’t get recognized are at the UFC level; they just haven’t had the opportunities that I’ve had. There are guys that really push me and are better at certain aspects and complement me really well, and I tell them ‘just because I’m in the UFC, we’re not any different. I just had an opportunity and I seized it. As far as talent, there’s no difference between us.’”

Strangely enough, training with hungry young fighters on the way up may have been the reason Pague has had such a solid training camp. If you’re looking to see if you’re ready for the next level, what better way to prove it than by putting it on a UFC fighter in the gym?

“I think a lot of them have that mindset and I was like that,” he said. “When I traveled out to Albuquerque and trained with the guys at Greg Jackson’s and some of the other top gyms that I was at, I felt like my level upped because I was trying to compare myself to those guys and hang with them. So I’m sure that is a big thing with the guys I train with.”

Now it’s up to Pague to step into the Octagon on Saturday and prove that he still belongs among the best of the best. He’s under no illusions about where he stands right now, but he’s not letting that realization weigh him down either.

“I’m almost certain that if I lose this one I’m cut,” he said. “But I’m at peace with it. I’m not going into it like ‘oh, I gotta win this, I gotta win this,’ because I don’t think I perform as well when I do. I’m just gonna go in and fight my heart out and I’m not even looking at losing as an option right now. I’m hungry for a win and that’s all I’m looking at.”

To some, Pague should be 3-2 in the Octagon and not 1-4, and just the fact that he’s lost three straight but still got another shot proves that the UFC brass hasn’t looked solely at the bottom line when it comes to “The Disciple.” But after all the injuries, the questionable decisions, and the bad luck, Pague is back home and happy. And that just may be the catalyst to get him back in the win column and back to the business of moving up the bantamweight ranks.

“I had some really bad luck with my UFC career, but what do you do?” he asks. “You just gotta move on and keep truckin.”