The Downes Side: The Ultimate Fighter Finale

The fighters will only compete once during UFC International Fight Week, but the Nostradamus of MMA has no such luxuries. Next Friday, the second of three consecutive events takes place, as The Ultimate Fighter Season 23 Finale hits the MGM Grand Garden Arena. In the main event of the evening, Joanna Jedrzejczyk defends her strawweight title against Claudia Gadelha. 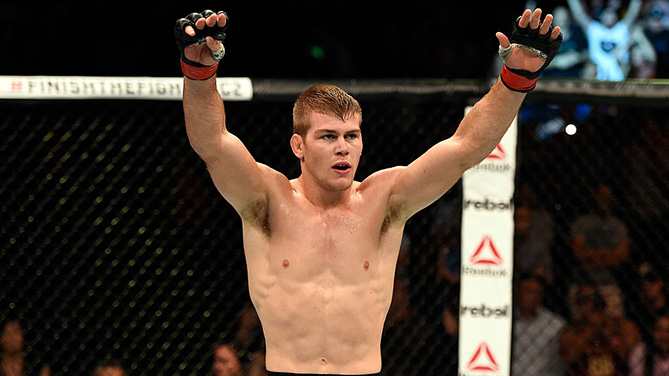 We start in the lightweight division with Jake Matthews and Kevin Lee. A veteran of five UFC fights at 21 years old, Jake Matthews can earn a spot in the rankings with a win here. A Brazilian Jiu-Jitsu brown belt, he’s won two straight after the only loss of career to James Vick. The “Motown Phenom” Lee has accomplished a lot at a young age as well. Holding a 5-2 record inside the Octagon, the 23-year-old has five career submission wins.

Both fighters are young and have made tremendous strides in their last two fights.

Submissions may be their preferred way to finish fights, but they’ve become much smoother on their feet. That being said, both have some gaps that they need to improve. Matthews has become looser with his kickboxing, but he still looks tight. His right hand is effective, but he does rush into exchanges without cover. This leads to him eating big shots like in the Arreola and Vick fights. Lee steps hard on his punches as well, which means that the counter shots he absorbs have greater effect. The major difference between the two is that Matthews gets better as the fight progresses and Lee tends to slow down. As long as Matthews avoids running into a power shot, he’ll wear Lee down with body shots and kicks. Then, in the third round, he’ll hit a takedown and ground and pound his way to the TKO.

Next, we drop to the flyweight division for John Moraga and Matheus Nicolau. A former No. 1 contender, Moraga hasn’t stepped into the Octagon since his loss to Joseph Benavidez in May 2015. Effective in scrambles, half of his career wins have come via submission. A competitor on TUF Brazil 4, Nicolau has won four straight fights. A Novo Uniao fighter, he showed off his submission prowess by beating Bruno Rodrigues with a Japanese necktie (the worst Father’s Day present ever, by the way).

Moraga showed off a more developed kicking game in his last fight, but he’s still primarily a puncher. He has become more patient with his strikes, but when he decides to throw, he throws everything behind it. Nicolau mirrors him in a lot of ways. He’s very deliberate with his strikes and commits hard when he decides to go. Unlike Moraga, when he attacks, he attacks with combinations. He strings punches and kicks together and targets different levels. He does stall between blitzes, though, and that could be Moraga’s opportunity to strike. Ultimately, Nicolau’s defense should withstand any counters, and his higher output propels him to the unanimous decision.

ROSS PEARSON VS. WILL BROOKS

We return to lightweight for Ross Pearson and Will Brooks. Winner of TUF 9 all the way back in 2009, Pearson steps into the Octagon for the 20th time. He’s traded wins and losses in his last eight fights, but a win here could finally get him on track. Will Brooks makes his UFC debut on relatively short notice. A former champion in Bellator, he looks to make a major statement of his own.

Pearson suffers from a large athleticism gap in this fight. All is not lost, though. He had the same issue against Chad Laprise and worked around it. How? With constant pressure and head movement. Fast fighters like Brooks can cover large distances in a short amount of time. By staying tight and slipping punches, Pearson’s strikes only have to travel short distances. You can have hand speed by being fast, or you can have hand speed by always having your gloves in position to punch. Brooks needs to come out fast. Much like Jake Matthews, he becomes stronger as the fight progresses. The tactics in a three-round fight are much different than the five rounders he’s used to. Brooks’s shortened training camp is a worry, but he’s a better overall fighter. He may lose some boxing exchanges, but his superior kicking game and wrestling advantage will give him the decision victory.

Time for the main event! Joanna Jedrzejczyk won their first fight in 2014 by split decision, but she’s looking for a more emphatic statement this time around. Defending her belt for the third time, Jedrzejczyk couples world class striking with excellent takedown defense in a way we rarely see in MMA. Gadelha has only fought once since losing to Jedrzejczyk, a dominant win over Jessica Aguilar.

We know what Jedrzejczyk wants to do. The question is, “Can Gadelha stop her?” If you look at their first fight, a well-placed uppercut in the closing minute of the first round was the deciding factor. Gadelha left herself open because she tired herself out reaching for a takedown. Jedrzejczyk can be taken down, but out-muscling her against the fence isn’t the way to do it. Valerie Latourneau had success by catching kicks and attempting takedowns in the middle of the cage. Gadelha may know how to do that, but she hasn’t done it in the Octagon. Most of her takedowns are power moves/throws. It may work in the early rounds, but that strategy is not feasible over the course of a five-round fight. Gadelha has success in the early rounds, but Jedrzejczyk will command rounds 3-5. That’s enough to win on the scorecards and retain the title.

That wraps up another penultimate edition of the Downes Side. Follow me on Twitter @dannyboydownes. Also, don’t forget to leave your own thoughts, predictions, insightful analyses and Netflix suggestions on the page here. I’ve just really fallen into a rut lately and can’t seem to find anything worth checking out. If only they’d add season six of My Little Pony: Friendship is Magic…