The Downes Side: UFN Dublin Predictions 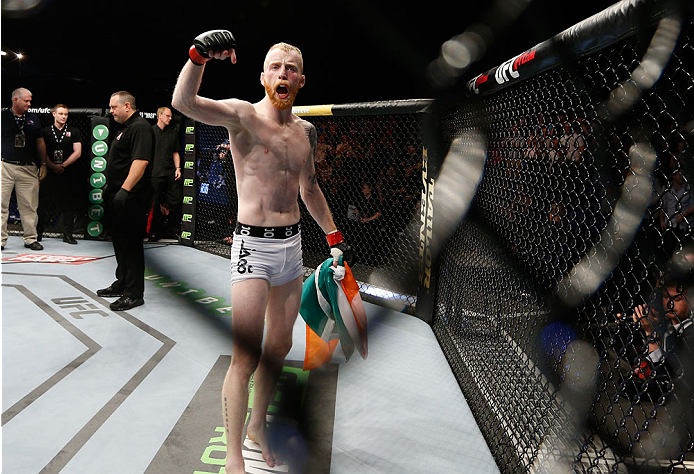 That’s right boys and girls, it’s time for another Irish edition of the Downes Side! As the poet William Butler Yeats once said, “Education is not the filling of a pail, but rather the lighting of a fire,” and I’m here to light a fire (unless you plan on talking to my parole officer).

There’s sure to be some fiery action inside the 3Arena in Dublin, Ireland, as the UFC returns for a Fight Night on UFC FIGHT PASS. After some last minute changes, the main event will feature flyweights Paddy Holohan and Louis Smolka. In the co-main event of the evening, Norman Parke and Reza Madadi duke it out in the talent rich lightweight division. Those aren’t the pipes calling, it’s Andy Friedlander. It’s fight time!

We open the main card in the flyweight division with Neil Seery and Jon Delos Reyes. Born and raised in Dublin, “2Tap” Seery’s overall record can be distracting. He’s 7-3 in his last ten fights and 2-2 inside the Octagon. The 36-year-old veteran doesn’t mind trading hands, but he also searches for opportunistic submissions. Another island native (Guam), Jon Delos Reyes suffered back to back first-round submission losses in his first UFC fights. He took some time off to focus on his jiu-jitsu and used it to defeat Roldan Sangcha-an by RNC in May.

Seery is aggressive with his submissions, but the Smolka fight showed that he doesn’t do well off his back. Sure, he threw up submission attempts, but he struggled to get back to his feet. Reyes has youth, athleticism and looks on his side. Unfortunately for him, the UFC homecoming dance was a couple weeks ago. Reyes can be aggressive, but he only defends strikes at a 44.34% rate. Seery doesn’t have a ton of KO power, but he throws combos and avoids the counter attack. He’ll beat Reyes up and force a scramble. In that scramble, he’ll find Reyes’s neck and win by second round guillotine submission.

Nicolas Dalby vs. Darren Till

Next we move to welterweight for a battle between undefeated fighters Nicolas Dalby and Darren Till. Straight outta Denmark like that crazy [you know what] Hamlet, Dalby impressed in his UFC debut with a win over Elizeu Zaleski dos Santos. Darren Till was even more impressive in his debut that same night, picking up the second-round KO via elbow.

In a lot of ways, these fighters cancel each other out. They’re both sound kickboxers with good, not great, hands who throw a lot of single kicks without setups. Till has more force behind his strikes, but he’s a bit slower and has superior footwork. As much as I’d like to see these two make it a kickboxing fight, Dalby should avoid such a strategy. He’s a far better striker when he’s going forward rather than countering. What he does do well, though, is countering with a double leg. Dalby shoots for the takedown after a Till kick and maintains top position for three rounds to take the decision.

We drop to lightweight for Norman Parke and Reza Madadi. Finding himself on the wrong side of two straight split decisions, “Stormin” Norman Parke is ready to bring the thunder. Capable everywhere, Parke is a tornado on his feet and lightning quick with submissions with 14 career wins by tap out. A powerful grappler, Madadi has used his high-pressure system to secure a win over Michael Johnson his last time out.

Two close losses may have Parke thinking that his future is cloudy, but being the optimist I am, I prefer to think of it as partly sunny. Madadi may be the superior grappler, but Parke does defend takedowns at an 87.5% rate. Parke’s biggest problem is that his striking is about as accurate as the new guy on channel 10 (that’s 36.59%). Parke may not break the Beaufort Scale, but he’ll be fast enough to avoid the takedown and win by decision.

Time for the main event! Paddy “The Hooligan” Holohan may sound like the name of a character on an old episode of the Untouchables or an Irish PSA directed towards at-risk youth, but it’s actually the SBG flyweight standout. Winner of two straight over Shane Howell and Vaughan Lee, Holohan is a rangy striker with eight career submission wins. Louis Smolka has also won two straight over Neil Seery and Richie Vaculik. Experienced in judo and karate, “Da Last Samurai” can deftly dodge opponents the same way he dodges cease and desist letters from Tom Cruise.

Smolka often lets opponents dictate the course of the fight. He always returns fire after being hit, but he rarely takes the initiative. That works out well for someone like Holohan, but he wastes too many strikes. He regularly throws strikes just for the sake of throwing them instead of taking his time and reading openings. At distance, Holohan may have the advantage, but he rushes in too much. Smolka stands too upright for my liking, but he has a distinct edge inside the pocket. He’ll batter Holohan with uppercuts, avoid the takedown and control the clinch. Irish eyes won’t be smiling as the Hawaiian wins on the scorecards.

That wraps up another poetic version of the Downes Side. Follow me on Twitter @dannyboydownes. Also, don’t forget to leave your own predictions, criticisms, assessments and appraisals on the page here. As Yeats also said, “There are no strangers here; only friends you haven’t yet met.” He must not have read comments pages either...