The Downes Side: UFC 192 Predictions 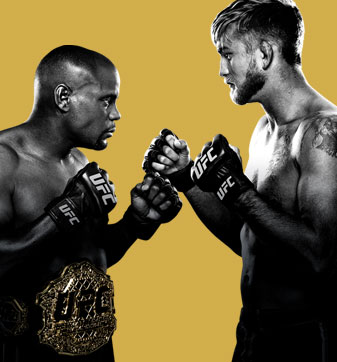 That’s right boys and girls, it’s time for another Texas-sized edition of the Downes Side, but no matter what size it is, the UFC has some fights for you this weekend.

Live from the Toyota Center in Houston, we have UFC 192. In the main event of the evening, light heavyweight champion Daniel Cormier defends his belt against Alexander “The Mauler” Gustafsson, and the co-main event delivers a battle between top 5 light heavyweights Rashad Evans and Ryan Bader. So grab some brisket and a novelty belt buckle. It’s fight time!

We begin the main card in the women’s bantamweight division with Jessica Eye and Julianna Pena. A pure striker, Eye likes to keep her opponents at a distance and attack with straight punches. After nearly punching Leslie Smith’s ear off at UFC 180, Eye looks to return to the win column following a decision loss to Miesha Tate. Winner of season 18 of The Ultimate Fighter, Pena returned from a long layoff (due to a knee injury) to crush Milana Dudieva with a first-round TKO.

Calling Pena aggressive is a pretty big understatement. She’s always moving forward, throwing punches with as much power as she can muster. That’s why she lands significant strikes at an incredible rate of 7.81/minute. Eye, on the other hand, is much more calculating and thoughtful with her strikes. Eye could keep Pena at the end of her jab and pull out the decision, but I doubt she’ll be able to do it over the course of three rounds. Pena’s recklessness will cost her one day, just not this day. Pena by second round TKO.

Next we jump to heavyweight for Shawn Jordan and Ruslan Magomedov. Currently riding a three-fight win streak, Jordan is one of the most athletic fighters in the division right now. He certainly has power (his 14 career KOs prove that), but he can use his pacing to wear out opponents as much as he uses his hands. Another strong prospect from Dagestan, Magomedov does not have the same KO power, but he’s extremely well-rounded.

Jordan’s offensive wrestling is capable, but not necessarily elite. Coupling that with Magomedov’s excellent takedown defense (he defends at an 88.89% rate), this will be a stand-up fight. Jordan may have the power, but he’s very hittable. Magomedov may not have the same bursts, but he knows how to use his range and footwork better. It may not be flashy, but Magomedov pulls out the decision win.

We drop down to light heavyweight for Ryan Bader and Rashad Evans. Fighting in the UFC since 2008, Bader seems to be finally coming into his own. He’s won his last four fights and is ranked #4 in the division. Sidelined for nearly two years with a knee injury, Evans hasn’t fought since his first-round TKO over Chael Sonnen at UFC 167. A former light heavyweight champion, we’ll see if the 36-year-old Evans still has what it takes to compete at a high level.

Both fighters have wrestling backgrounds. If you look at their stats, though, neither one has had a lot of success converting takedowns. They’ll nullify each other in the wrestling department. Bader’s striking has improved, but he can still be stiff and rely on his power too much. Evans flows better, but doesn’t have a lot of force behind his strikes. Evans doesn’t attack much, but he’ll confuse Bader enough with feints and movement to take the decision win.

Time for the main event! Daniel Cormier defends his title for the first time since beating Anthony Johnson back in May. A former Olympic wrestler, you don’t become champion nowadays being a one trick pony. He uses his punches to set up clinch entries, but can also find a home for a powerful overhand right. Did you guys know that Alexander Gustafsson is tall? Well, he is. He does have a lot more than that going for him, though. The 6’5” Swede knows how to use his punches and kicks to keep distance, but he’s also dangerous inside the clinch.

Much like calculus, MMA math is useless in the real world. Gustafsson lost to Anthony Johnson and Cormier throttled him. Seems pretty cut and dried, right? Gustafsson does have below average striking defense, but Cormier doesn’t have the same KO power as Anthony Johnson. Gustafsson also has better takedown defense. This fight is much more complicated that tall guy vs. short guy, but reach does come into play. Cormier struggled to find an entry point against Jones and I think the same happens here. As long as Gustafsson doesn’t tire out in the later rounds, the “Mauler” pulls off the upset and wins by decision.

That wraps up another Downes Side. Follow me on Twitter @dannyboydownes. Also, don’t forget to leave your own predictions, thoughts, concerns and letters to the editor. He won’t read them, but at least you wrote a letter. How many people do that?