The Downes Side: UFC 178 Predictions 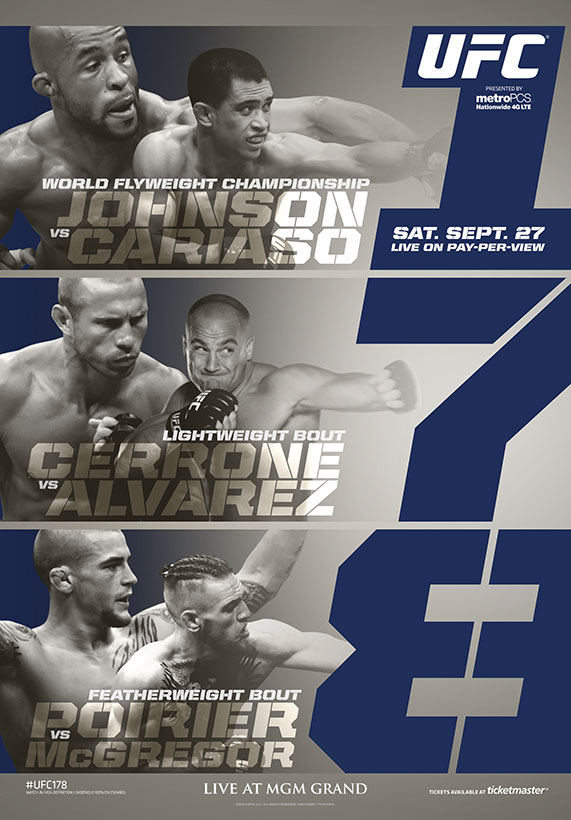 That’s right boys and girls, it’s time for the first autumnal edition of the Downes Side! Way more fun than raking leaves, I dare say it’s nearly twice as enjoyable as apple picking.

Sweeter than your favorite pumpkin spiced latte, the Ultimate Fighting Championship returns to the MGM Grand Garden Arena on Saturday for UFC 178. In the main event of the evening, flyweight champion Demetrious “Mighty Mouse” Johnson defends his title against Chirs Cariaso. The co-main event of the night brings as much hype as a championship fight as Donald Cerrone tries to make Eddie Alvarez’s introduction to the Octagon as painful as possible. Grab your favorite windbreaker, because it’s fight time!

We open up in the women’s bantamweight division with Cat Zingano and Amanda Nunes. Sidelined by a knee injury, “Alpha” Cat looks to reclaim her title shot with a win here. After two straight wins over Sheila Gaff and Germaine de Randamie, Nunes can make a big jump in the rankings with a win here.

Nunes is a fast starter. Of her nine career wins, seven have come in the first round. She overwhelmed her first two UFC opponents with explosiveness and aggression. Nunes has a lot of offensive power, but she’s inconsistent and fades as time progresses. Zingano may not have the same one-punch power, but she has many more skills at her disposal. She’ll weather Nunes’s initial onslaught, find her groove and start to coast. Early into the third round she’ll take Nunes to the mat and ground and pound her way to the TKO.

We move to middleweight for Tim Kennedy and Yoel Romero. Undefeated in his UFC career, Romero is a wildcard inside the cage. Known for his Olympic wrestling, he’s been winning fights with explosive striking and aggression. Riding high from his unanimous decision victory over Michael Bisping in April, Kennedy can climb another couple rungs on the middleweight ladder. A grapple-heavy fighter, this Jackson/Winkeljohn fighter’s second best weapon is his biting sarcasm (totally unrelated, anyone that told you I cried after meeting him for the first time is a liar).

For as much attention that we’ve paid to Romero’s wrestling background, he hasn’t really shown those capabilities inside the Octagon. His striking and offensive capabilities have been phenomenal, but he’s given up takedowns and only succeeds at his own attempts at a below 30% rate. Kennedy may not be able to match the striking output, but he’ll stymie Romero’s attack with his superior MMA grappling. Despite what your overpriced personal trainer told you, you don’t need a kinesiology degree to understand the human body. You can’t throw jumping knees when you’re on your back. Kennedy by unanimous decision.

That brings us to the co-co-main event of the night. More fun than a cocoa main event, but not quite as interesting as the coca main event, this match is the early favorite for Fight of the Night. Winner of three straight, “The Diamond” Poirier has vowed to derail the McGregor hype train. Undefeated in his short UFC career, “The Notorious” McGregor is on the cusp of becoming the most famous Irishman since James Joyce, For some reason, 13 KOs relate to kids these days much better than Finnegan’s Wake.

Other than that one time Chuck Liddell sung the Soviet national anthem, it’s hard to think of a more polarizing figure than Conor McGregor. Even before he stepped into the Octagon for the first time, people seemed to plant themselves firmly into one of two camps. Either he’s the next featherweight champion or a product of hype, marketing and a soft Irish brogue. As the resident expert here in the UFC, I’m here to settle the matter -- he’s neither. He has tremendous ability to attack at a distance, but he struggles when crowded. Dustin Poirier will exploit this and get right in McGregor’s face. He’ll easily brush off the spin kicks, work his boxing and take the unanimous decision victory.

We shift to the lightweight division for Donald Cerrone and Eddie Alvarez. After four straight finish victories, ol’ Cowboy Cerrone shows a renewed sense of vim and vigor. While not quite to the level of John Wayne in The Sons of Katie Elder, his second round KO of Jim Miller in July catapulted him past Rio Bravo levels. Inactive for nearly a year, Eddie Alvarez finally makes his Ultimate Fighting Championship debut. It’s hard to determine what John Wayne film Alvarez embodies, but I’m leaning towards Sands of Iwo Jima.

This fight isn’t about Marion Mitchell Morrison, however; it’s about bringing some order to the crowded lightweight division. Both of these fighters are offensive powerhouses, but are prone to defensive lapses. They rely too much on their durability and allow opponents to gain momentum. This fight boils down to range. Alvarez has the power advantage, but he doesn’t utilize distance as well as Cowboy. Couple that with his 65.43% takedown defense, and Cerrone takes this one by unanimous decision.

Time for the main event! Defending his title for the fifth time, Demetrious “Mighty Mouse” Johnson is one of the most technically sound fighters in any division. Fresh off his UFC 174 win over Ali Bagautinov, Johnson can beat opponents anywhere. None of his opponents have found an answer for his seamless blend of striking and wrestling. Winner of three straight, Cariaso’s high striking rate and solid defense could provide that answer.

Cariaso hasn’t been given the level of respect he deserves. He’s a capable fighter that may lack finishing power, but he knows how to control the stand-up exchanges. He even defends takedowns at roughly the same rate as Johnson. Having said that, he lacks what (I believe) the Germans call “je ne sais quoi.” He just doesn’t seem to have that extra gear that a champion must possess. He’ll hold his own in the early going, but eventually the talent gap will become evident. As the second round comes to a close, Johnson will find a home for his right hand and follow up with the ground and pound to secure the TKO.

That wraps up another Downes Side that critics will call, “Twice as exciting as the September equinox!” Don’t forget to follow me on Twitter @dannyboydownes. Also, remember to leave your own compliments, predictions, fallacious arguments, interrogatives and apple-based dishes on the page here. And while I’m as patriotic as they come, I can’t stand apple pie.