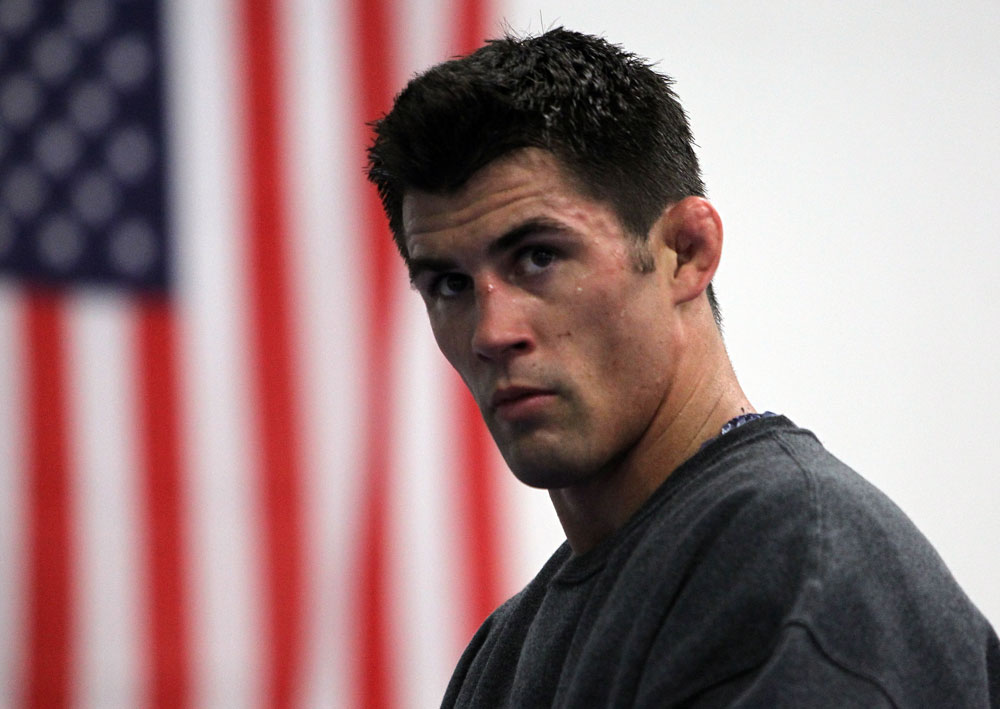 As the first 135-pound champion in UFC history, Dominick Cruz is an established star in the sport, far removed from those days when he wondered where the next paycheck was coming from or whether this dream of making prizefighting his career was going to pan out. That doesn’t mean he’s forgotten what it means to struggle though, and it’s that ability to put himself back in that mindset that made him the perfect choice to coach alongside his longtime rival Urijah Faber on the new season of The Ultimate Fighter, which premieres this Friday night on FX.

“Fortunately, you never forget how that feels,” said the bantamweight boss. “When you forget how that feels, you kinda lose yourself and you change into somebody else. So I make it a point to never forget to be that person, and I definitely know how it feels, and that’s why I make it a big focus that these guys are gonna get a hundred percent of me. A lot of these guys put it all on the line and they’ve all sacrificed something big to be in this position. So I definitely know how they feel, and it’s gonna be a good time being able to help these guys out.”

It’s been a long road for Cruz to get here, despite him being just 26 years old, but he’s paid his dues, fighting it out on the local circuit until getting called to challenge Faber for the WEC 145-pound crown in March 2007. Cruz would get submitted in 98 seconds by “The California Kid” that night, kicking off the rivalry that continues to this day. It had subsided a little, at least on Cruz’ side, considering that he evened the score with a five round win over Faber in their UFC 132 rematch last July, but tensions have started to rise again with the show and their rubber match just around the corner. And to add to matters, Cruz and Faber are likely to see each other almost every day as they prepare for battle, a different scenario to say the least.

“I don’t really know how you necessarily prepare for it and I don’t really know if it’s gonna be weird or not,” said Cruz. “This is one of those things that nobody’s ever been through, so you can’t really get advice on the live portion of this thing. But at the same time, other coaches have seen the guy that they’re fighting on the show the whole time and it hasn’t been an issue. So I know that I’ll be just fine. Me and Faber are professionals, we’ll go in there and do our jobs as coaches and at the end of the day we’ll go home and get our training done on our own. The only downside to it is looking at his goofy mug all day long and hearing him talk. Other than that, it’s just another day.”

To get him through those days in the gym and to aid him with the eight hopefuls that will be on his team on TUF, Cruz has brought in his coaches and teammates from San Diego’s Team Alliance: Eric Del Fierro, Phil Davis, Shannon Slack, Doug Balzarini, and Ross Pearson, and he expects to have some guest coaches in as well. As for who those eight team members might be, he has to wait with everyone else until the 32 finalists fight each other on Friday night and trim the roster down to 16. Then it’s up to him and Faber to choose their squads. Cruz has started looking at the first 32 though.

“I’ve looked at some guys for sure, and I know a couple of the guys on the show, so I know what some of these guys are capable of, and some I know nothing about,” he said. “But that’s kind of the fun of this whole situation is that not only do you not know what they’re going to throw at you on that first preliminary day in terms of what the format’s going to be like, but you’re kinda taking the entire situation as it comes. I’m just gonna watch these guys throw down and see the attributes that they show in that tough situation, no pun intended, and I’m just gonna make my decisions there.”

Yet whoever ends up on Team Cruz, expect the coach to do the same things he’s been doing in the Alliance Gym: not just working to make himself better, but to set a good example for his teammates, just like a true champion should. It’s a responsibility he’s taken seriously ever since putting the belt around his waist, and many of his high-profile teammates, including Davis, Brandon Vera, and Mike Easton have noted Cruz’ qualities as a leader.

“The idea behind that is that most people don’t even choose to be a leader,” Cruz explains. “You become a leader by example. How do you become a leader to a guy like Brandon Vera, who has had the career he’s had in the UFC, and done the things that he’s done? Look at Phil Davis, he’s a four-time All-American at one of the most elite wrestling schools in the country, and to become a leader to somebody like that, you don’t go out and choose to be their leader; they choose you, and that happens by leading by example. And that’s what I do and that’s what I plan on doing on this TUF show. Anything I ask these guys to do, they’re gonna know I’ve done it either twice as much, twice as hard, or exactly as many times as them. And that’s exactly how you lead a group of guys like this. You show them how it’s done, and then they follow.”

You also check your ego at the door. And as much as Cruz wants to get the mental jump on Faber, and Faber wants to do the same on Cruz, when it’s time to practice, you can’t be the champion in the ivory tower; you’ve got to put your gloves on, your mouthpiece in, and work just like everyone else in that gym. “The Dominator” embraces that idea, believing that it’s a return to the days before he even thought of stepping in the cage.

“It might be weird for people to think about, but this is a huge learning experience for me,” said Cruz. “As you said, I am established, but I’m still young and I still have tons that I can learn. A lot of these guys that are gonna be on the show, I guarantee you that I can learn something from every single one of them. What I can show them is how to deal with the nerves, deal with the spotlight, deal with being on the UFC stage, and I can also teach them some of the greater attributes of being a full MMA fighter from head to toe in the sense of style and how to mix combinations together and punches and kicks and everything like that. But I’m looking forward to learning how to deal with people that I’ve never met in my life and coaching them from the beginning. That’s like going back to my old coaching days when I first started, so it brings me back to the beginning of my career really, and it’s almost like full circle. When I started fighting I was coaching a high school wrestling team. One of my wrestlers said ‘you’ve got to get in the gym and try this out,’ and I went with him and the next thing you know, I’m fighting. Now I’m right back at the beginning where I started, I’m coaching, I’m helping guys out, and I’ve got no problem with that. I’m looking forward to it.”