The champ @TJDillashaw spoke at a media lunch moments ago about his rematch against @Cody_Nolove at #UFC227. Tickets are on sale now https://t.co/915BHQqtHp pic.twitter.com/43A31eJXAQ
— UFC News (@UFCNews) June 15, 2018

The bitter rivalry between UFC bantamweight champion TJ Dillashaw and former champ Cody Garbrandt is as alive as ever. While at a UFC 227 media lunch, Dillashaw provided some insight into the relationship between the two former Team Alpha Male fighters.

“It never really was personal between me and him. It became personal by the attacks you know? But I don’t have a hate for the guy,” said Dillashaw. “I do love beating him because he likes to run his mouth and the more you run your mouth it’s going to be that much more enjoyable to beat you. It wasn’t like I was chasing this drama, I was getting away from it. I moved to Colorado and it followed me.” 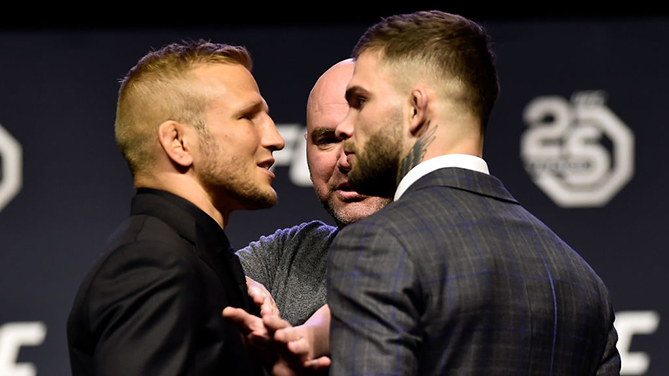 As for how he’s approaching their August 4th rematch in Los Angeles, Dillashaw isn’t lacking any motivation and is confident that things will play out the same way – if not better.

“I love getting rich for knocking Cody out. It’s a lot different this time. You can’t be such a jerk, you got to finish. For as much crap as he talked he deserves to get his ass kicked again.”

“I think there is a lot of holes I didn’t show as well too in his game. I finished him in the 2nd round and I’m better everywhere so that’s the thing,” said Dillashaw. “I can take the fight any direction to win this fight and I still believe those same openings will be there. I don’t think he’s as intelligent of a fighter to switch up what he does.”