"As a professional athlete, especially one that’s competitive like I consider myself, you’re never really satisfied." - Ulysses Gomez 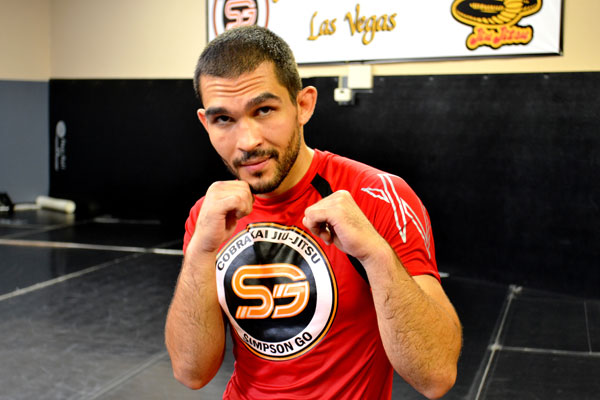 You may or may not believe in destiny, but there was always a sense that Ulysses Gomez was going to end up in the UFC. Always around the perimeter of the organization, whether it was through being brought in for grappling demonstrations for athletic commissions, or competing against Japanese legend Rumina Sato during 2009’s UFC Fan Expo, Gomez was a natural fit as a UFC fighter if not for one problem – his optimum fighting weight was 125 pounds.

So while he watched bigger fighters make it in the Octagon, Gomez was on the outside looking in, waiting.

“I’ve been following the UFC from Day One pretty much, and when they took over the WEC, I was like ‘oh, they’re gonna get the flyweights pretty soon,’ and they actually announced that they were gonna have the 125 pounders in the WEC,” he recalled. “And by that time, it was 2008 or 2009, and I was already fighting professionally, so I said oh, they’ll call me eventually. Then the WEC got merged with the UFC and I was like ‘man, no flyweights.’ But then they finally announced it in December of last year and they had the first fight in March and I was like ‘okay man, any day now.’”

But that any day now turned into any week now and then any month now. Gomez, 9-2 as a pro but fighting at bantamweight in his most recent two fights, had to think about staying busy and not worrying whether the UFC was in his immediate future.

Of course then the phone rang with an offer to sign with the organization and face John Moraga on this Saturday’s UFC on FOX card in Los Angeles. If you’re wondering about that destiny thing again, consider that one night last winter while working at the Hard Rock Hotel & Casino in Las Vegas (where he still works today), Gomez met Moraga through one of the Lally brothers, who the California native used to train with. As they walked away, Gomez told his supervisor, “watch, one of these days, me and that guy are gonna fight.”

Gomez laughs about it now. “So I called it that day, but I didn’t think it would be my first fight in the UFC.”

It is though, and as the latest Arizona State University standout to make it to the Octagon, Moraga will be a tough test for Gomez, and when you add in that “Useless” got the fight on short notice when Ian McCall was injured, that’s just another layer of stress tossed on top. But you wouldn’t know it by talking to the 29-year old.

“I’m always training, but there’s a difference between training for a fight and training to get better and I was trying to train to get better,” said Gomez, whose most recent bout was a third round submission win over Cody Gibson last December. “I actually had pretty good cardio, but it was a crash course to get a gameplan going and try to stick to it. But when the UFC calls, you’ve got to answer that phone.”

And if anything, despite working in the heart of the Las Vegas nightclub scene, Gomez has shown his resolve to be iron-clad, proving that he has the discipline, determination, and focus to be ready for anything that comes his way.

“It’s kinda crazy,” he said. “I’m a weird guy. I don’t drink alcohol, I don’t smoke, I don’t eat meat, I don’t cuss, I don’t really go out, I don’t gamble. I pretty much just train. I do go to work, which is kinda weird because everything I don’t do, I work at Rehab at the Hard Rock and they kinda promote it. (Laughs) But I have my parents and my girl and my family, and they have my head on straight for me because I know if any second I do something or think that I’m bigger than I am, they’ll let me know quick.”

He also has his brother looking out for him as well, and if you don’t know who his older sibling is, it’s Herculez Gomez, a member of the United States national soccer team who will actually be in Vegas this week when his club team, Mexico’s Santos Laguna, plays against Real Madrid on August 5th. Ulysses expects to win on Saturday night and be back home on Sunday morning in time to watch his brother on the pitch, and you’ve got to think it’s a heady time for their parents to see their sons competing at the highest level of their respective sports. Gomez knows that his mother and father are proud, but he’s not sure whether they truly appreciate how big his UFC signing is. At least not compared to playing soccer against Cristiano Ronaldo’s Real Madrid.

“Me signing with the UFC, they know that it’s a big deal, but I don’t think they understand how big of a deal it is until they get there for the fight,” he said. “I was fighting at Tachi Palace in front of 1,800 people; now I’m fighting in front of 18,000 people and I think they know, but it’s different when you know and when you see it firsthand.”

But how will Gomez react to being in the place he has wanted to be in for years? Well, the answer to one question about it speaks volumes, because it’s clear that just making it to the UFC isn’t enough for him.

“It’s never really satisfying because as a professional athlete, especially one that’s competitive like I consider myself, you’re never really satisfied,” he said. “I got here, now let me see if I can go there. So I think me getting signed by the UFC definitely proves that I belong in the show, but it’s one thing to get signed by the UFC and another to win a fight in the UFC, especially your first one. So now that I got signed, my next goal is to win, and after that I’ve got to establish myself as a contender and eventually become a champion. This is just the beginning.”