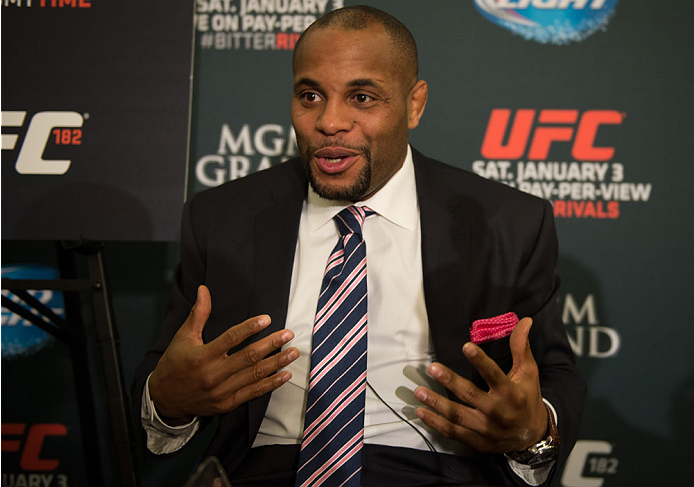 As one of the top light heavyweights in the world, Daniel Cormier knew he would get another shot at a UFC title. He just didn’t know it would be less than five months after the first one.

“I thought it was gonna be a while because I figured if (Anthony) ‘Rumble’ (Johnson) was to beat Jon (Jones), it would take two times because Jon had won so many defenses that if he had lost, he would get an immediate rematch,” Cormier said. “So I figured if Anthony even beat him, he would have to beat him again, and then I would hopefully beat Anthony and then Jon and I could fight for the belt.”
> Order UFC 187: Johnson vs. Cormier on Pay-Per-View or UFC.TV

This was the scenario in Cormier’s head a week ago. He had lost a decision to then 205-pound champ Jon Jones at UFC 182 on January 3, and was preparing for a June 6 fight against Ryan Bader while Jones was scheduled to defend his title against Anthony “Rumble” Johnson on May 23 in Las Vegas.

Then everything went haywire on Sunday, and a day later it was revealed that Jones was being charged with leaving the scene of an accident involving personal injury in Albuquerque. All the while, things began to shift in Cormier’s world, as he saw the possibility that a title shot might be coming up sooner rather than later.

“We were hanging out at home and all this Jon Jones stuff started popping up, and I’m like ‘man, what if?’” Cormier said of his initial reaction to the Jones’ news. “What if they end up having to replace this guy, because this is really bad. If they have to replace him, we want to be the person they replace him with. So I texted (UFC Chairman and CEO) Lorenzo (Fertitta) right away and I called (UFC President) Dana (White) while I was running on the treadmill, to make sure he heard me running on the treadmill. (Laughs) And then I kept making known that if there was an opportunity, I want it. The crazy thing is, when stuff like that comes about, I didn’t hesitate because the competitor in me is like ‘okay, you get a chance to fight for the championship again.’ But the logical person in my relationship is my fiancée, and she was like ‘hold on a second, let’s think about this.’ Not because she thinks I can’t win, but because sometimes as guys, we jump in feet first. So we sat and talked about it, and I continued to call Lorenzo and Dana, trying to push myself into that fight.”

On Tuesday, Jones was stripped of his title and suspended indefinitely. Cormier got the call and the fight against Johnson. And while it would have been nice for “DC” to fight Bader in his home state of Louisiana on June 6, a title fight on May 23 was something he couldn’t turn down.

“Not only for myself but for my family, Salina and my children, if you get an opportunity to fight for a championship, you gotta take it,” he said. “There was never any question as to whether I was going to say ‘no, thank you, I’d rather fight in New Orleans.’ My ultimate goal is to be the champion of the UFC. Regardless of how that comes about, that’s always been the goal, and that’s what drives me. That’s why I do this sport and that’s why I compete. I want to be the best and now I get an opportunity to actually hold the belt that, after January, it was hard to imagine at what point I would actually get back there.”

Cormier, a two-time member of the United States Olympic freestyle wrestling team, didn’t get blown out by Jones in any way, shape, or form in their UFC 182 main event, despite 49-46 scores across the board. It was an exciting and competitive bout, and most believed that with a win over Bader, DC would have been right back in the running for another title fight. But now he’s got one, and even though he’ll be shortening his training camp by two weeks, he’s got it all figured out.

“I have to change my approach to dieting,” he said. “So instead of doing things as I’ve always done, I have to actually get help. One of my sponsors, Nutrie, one of their dieticians is Kim Lyons, and she was on The Biggest Loser. So she sent me out a diet plan and Tyson Griffin helps prepare the food and everything for me, so we’ll get the weight off faster. It’s a good thing to have people around you that care and want to help.”

And Cormier, 36, is grateful for the help heading into a bout with a talented and dangerous foe in Johnson.

“He’s got big power, and I see a guy now that’s just super confident,” DC said of the number one light heavyweight contender. “Even in his walk to the Octagon, he looks like he doesn’t have a care in the world; he just knows he’s going in there to get his hand raised. And Rumble’s a good guy. I can’t sit here and fabricate something like I dislike the guy. He’s a very nice guy, and he’s a southern guy, so he’s what you expect – he’s very down home, respectful and nice. Style wise, he’s a power striker with good wrestling, but he uses his wrestling in reverse. He wants to force guys to stand with him so he can knock them out. It’s just like Chuck Liddell. Chuck had a wrestling background, but he wouldn’t wrestle; Chuck would wrestle in reverse and stay on his feet so that he could knock people out, and that’s what I see with Rumble.”

That sounds like the FOX analyst talking, and that gig has helped a student of the game invest even more into studying his peers in the UFC, but like any good journalist, Cormier doesn’t just look at what’s in front of him. He sees the big picture, and could there be any bigger fight should he win in May than a rematch with Jones sometime down the line?

“Imagine if that happens,” he speculates. “If I win this fight and Jon Jones comes back, like when Mike Tyson came back, and his arch-rival is the guy holding the title that got taken away from him, could you imagine that stories and everything that would be tied to that event? It would be amazing for myself, for Jon, and also for the UFC. It would be crazy.”

First things first though, and for the immediate future, Cormier would be content with beating Johnson on May 23 and showing up to New Orleans with a belt over his shoulder.

“I think as much as they want to see me fight down home (in Louisiana), they would prefer me to bring the belt home and be the son coming home as the UFC champion,” he said. “That would be great.”