On This Day in UFC History: UFC 40

The high-intensity feud – years in the making - made UFC 40 the biggest event in UFC history up until that time.
By Thomas Gerbasi, on Twitter: @TGerbasi • Nov. 22, 2019

Since the creation of the UFC in 1993, there have been highly-anticipated fights and some bad blood grudge matches; but few matched the anticipation and fire behind the 2002 battle for the light heavyweight title between champion Tito Ortiz and challenger Ken Shamrock.

The high-intensity feud – years in the making - made UFC 40 the biggest event in UFC history up until that time, and if Ortiz wasn’t a star before his bout with the MMA pioneer and former pro wrestling star, his punishing third-round stoppage victory certainly did the trick.

After elaborate entrances from both men that ignited the packed house, the two combatants stared each other down from across the Octagon throughout Bruce Buffer’s introductions and referee John McCarthy’s instructions, antsy to hear the opening bell ring.

When it did, Ortiz came out with a quick right hand that missed, and Shamrock locked the champion up. Ortiz fought his way loose and nailed the challenger with a combination of punches and a knee. Shamrock fired off uppercuts from close range, but Ortiz kept throwing, with his opponent finally hitting the deck. Shamrock got up quickly and sent Ortiz to a knee with a right to the jaw and the two locked up after a furious first minute. In the second minute, Ortiz grabbed Shamrock in a clinch before scoring a takedown, and it was time for him to unleash his patented ground and pound attack. And unleash it he did, as he punished Shamrock for the remainder of the round, cutting him in the process, and making it evident that “The World’s Most Dangerous Man” was going to have a rough night.

It was a night that would last another ten minutes, as Ortiz continued to dominate his 38 year old foe, who simply had no answers for the prime champion either standing or on the mat. Finally after a steady three round pounding that left Shamrock’s face almost recognizable, the corner had seen enough, and they halted the bout before the bell for the fourth stanza.

After the bout, the two apparently squashed their beef.

“I always respected Ken as a fighter, I always looked up to him,” said Ortiz. “As a person we had our differences, and today we squared away our differences in the Octagon.”

“Tito Ortiz is a true champion, he beat me fair and square, and he’s the man,” said Shamrock. “We settled our differences, and it’s over and done with.” 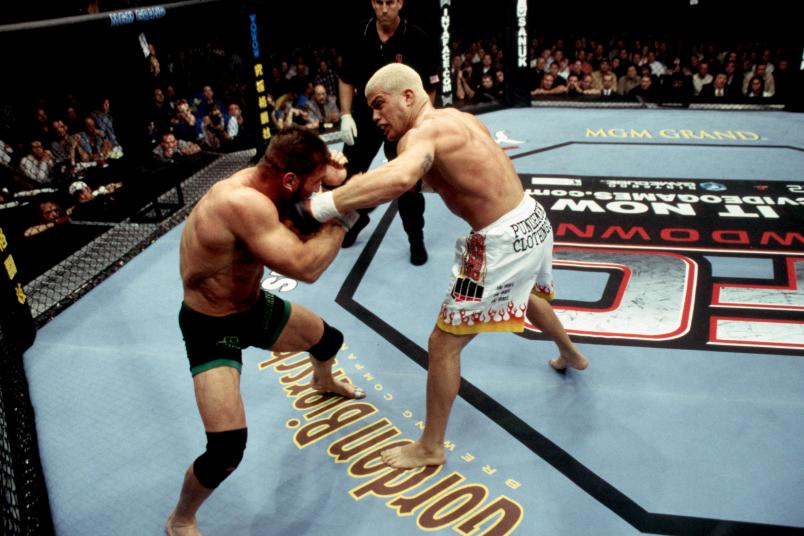 Or was it? Only time would tell.

In the co-feature, light heavyweight contender Chuck “The Iceman” Liddell put himself in line for a shot at his former training partner’s title with a first round knockout of Brazil’s Renato “Babalu” Sobral.

Fresh from a win over Vitor Belfort, Liddell stalked Sobral confidently, and the Brazilian looked equally calm in the Octagon. After pushing aside his foe’s first takedown attempt though, Liddell seemed to become even more intent on ending the bout early. That time would come soon enough, as he followed up some flush right hands with a surprise left kick to the head. Sobral fell hard to the canvas and as referee Larry Landless halted the bout at the 2:55 mark, Liddell yelled “I want my belt.”

In the night’s second championship bout, welterweight titleholder Matt Hughes continued to dominate the 170-pound weight class, this time dominating Gil Castillo on the mat for five minutes before the bout was halted due to a cut suffered by the former middleweight title challenger. The win was Hughes’ 11th in a row, and third in defense of his belt.

Former welterweight champion Carlos Newton was back in form in his first bout since losing his rematch to Hughes at UFC 38 as he submitted Pete Spratt via kimura at 1:41 of the first round.

The main card opener saw welterweight knockout artist “Ruthless” Robbie Lawler improve to 3-0 in the Octagon with a first round TKO via strikes of Tiki Ghosn.

In preliminary action, Andrei Arlovski snapped a two-fight losing streak with a 78 second TKO of England’s Ian Freeman, Vladimir Matyushenko submitted Travis Wiuff via strikes and Phillip Miller used a rear naked choke to produce a tap out from Mark Weir in round two.