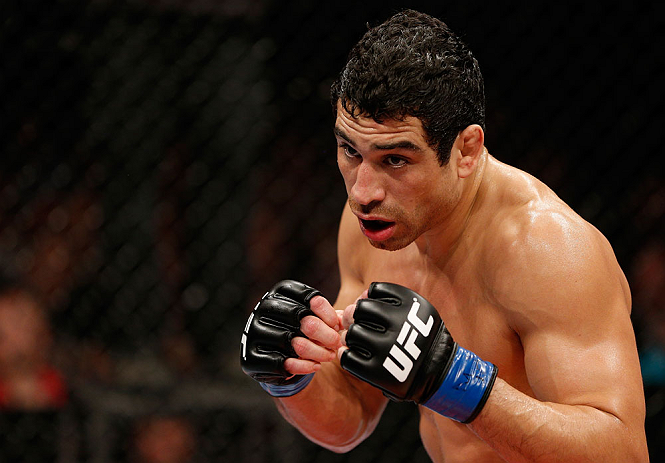 Former title challengers and perennial contenders Chad Mendes and Joseph Benavidez are the next two members of “The No Shirt Nation” most fight fans will identify, with surging bantamweight prospect and former Ultimate Fighter contestant T.J. Dillashaw rounding out the opening quartet.

New head coach Duane “Bang” Ludwig has already become synonymous with the Sacramento, California-based outfit, in part because he’s a respected veteran in the fight game, but also because the team has been running through the competition at every turn since Ludwig came on board.

Danny Castillo has been a member of the elite fight team for quite some time, and he’s been fighting under the Zuffa banner for five years and 15 fights. Over that time, the man known as “Last Call” has amassed a 10-5 record, battling it out with the likes of Donald Cerrone, Ricardo Lamas, Anthony Pettis, and Dustin Poirier.

Despite being a part of one of the top teams in the entire sport, and having fought some of the best fighters in the lightweight division, the 33-year-old Castillo has yet to experience the same kind of breakthrough many of his teammates have enjoyed. That’s partially why he was so excited to fight Bobby Green.

“I wanted that fight with Bobby Green because I saw Dana White’s video blog,” Castillo admits with a laugh. “He went backstage and talked with Bobby Green; he was so impressed with him, shook his hand. A big win over him, maybe Dana White would take some notice of who I am, what type of fighter I am. He talks to all my teammates, and a big win over Bobby Green would have put me on his radar.”

But the potential coming out party wasn’t meant to be.

Green was forced to withdraw from the UFC on FOX 8 preliminary card bout just a few weeks prior to the event.  Nervous that the late timing of Green’s injury might cause him to be pulled from the card, Castillo’s concerns were allayed when the word came down that former Strikeforce competitor Green would be replaced by the scrappy Tim Means.

It’s a very different matchup, and one that carries far less upside for Castillo, but with 20 fights already under his belt, and plenty of time spent competing on the big stage, he’s just thankful the UFC was able to find him an opponent.

“It’s great that the UFC could get me a fight because I’ve got family that already bought plane tickets and hotel rooms,” said Castillo, who has gone 5-2 since transitioning into the UFC lightweight division from the WEC.

“I feel like I built my career on short-notice fights; my first fight in the UFC was against Joe “Daddy” Stevenson on less than five-weeks notice,” he continues. “In a lot of ways, those fights are good because you’re not beat up from 10 weeks of just grinding. I wouldn’t say he has an advantage, but mentally, he’s just going in to fight another fight, and I felt great when I was in his position. He took the fight, so obviously he thinks he can beat me, which means it should be a great fight because I know I can beat him.”

Though he’s never questioned his place on the UFC roster, the late change in opponents gave Castillo momentary concerns, but after some encouraging words from his new head coach, his worries were set aside, and the confident swagger each member of Team Alpha Male carries into every fight returned in full force.

“I know I belong here. I know I’ve earned my spot here. I’ve got 15 fights under the Zuffa umbrella. In seven months of training, I was in the WEC fighting the best. In the top 10, we’ve got four WEC guys, including the champ. I’ve been fighting the best since I came into this sport, so I know I’ve earned my position. I’ve been grinding, training my ass off this whole time. I know I belong in the UFC.

“It’s definitely a different fight, but I was talking to coach, and when I told him we were fighting Tim Means, he said, `I don’t have any footage on him, but we’re going to take the fight. You’re in shape and you’re ready to go.’ Just hearing that from Coach Bang put that confidence back in me.

“I’m sure you hear this all the time, but I feel like I’m one of the hardest workers in MMA. If I’m not riding my bike, I’m watching video. If I’m not watching video, I’m in class working, and (with Coach Bang), when I get to practice, he’s already there. He’s texting me videos of different fights, he’s texting me about my opponent and my game plan.

“He’s a great coach because he treats each athlete as an individual, and he’s completely fair. He knows the buttons to push for the reaction he’s looking for too.”

Heading into next weekend, Ludwig has already pressed all the right buttons, and Castillo is ready to make the most of the opportunity that nearly slipped away.

“One thing about me is I’m consistently getting better. Even if I lose, you see the changes in me in the Octagon the next time out. I’m constantly working, constantly trying to get better. Now that the fight is still going on, I can show everybody how much I’ve improved and how well I can perform after working with Coach Bang.

“I feel incredible; I’ve had a great camp, and I’m the best Danny Castillo I have been in a long time. It was Bobby Green, but things have changed, and now it’s Tim Means. I’m in great shape, my skills are there, and I’m ready to go out there and…”

He pauses and chuckles, having talked himself into a bad pun.

Next weekend in Seattle, don’t expect Castillo to be doing anything quietly once the cage door closes. Bobby Green or no Bobby Green, this is still his chance to make some noise and get noticed, and you can be sure he’ll be looking to make the most of it.