"For the first time in my career I’m not really tripping because I’m in a good place with myself mentally and I truly believe I’m going to win.” 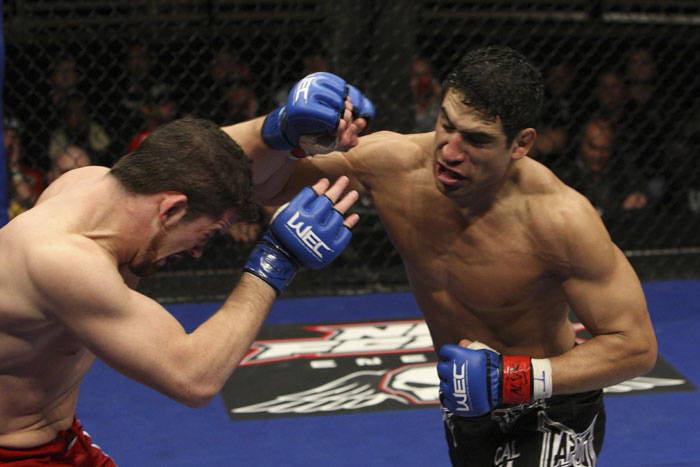 When Danny Castillo enters the Octagon this Thursday it will be his first time fighting as a freshly minted UFC competitor.  After toiling away at the smaller show level, Castillo paid his dues, eventually making it into the WEC, where he made his mark in the organization alongside his Team Alpha Male cohorts.  Now with this new transition, this former wrestler turned mixed martial artist is ready to tackle the UFC’s big names with no trepidations.

“It’s an honor to fight Joe Stevenson, a title contender and The Ultimate Fighter season 2 champ,” said Danny Castillo.  “Stylistically, it’s a bad matchup for him and I think there’s a lot of pressure on him. And even though it’s my first UFC fight, the WEC and the UFC have the same staff so as soon as I get off the plane I’m going to know everyone; it’s not going to be something foreign to me. The only thing different will be the color of my gloves.  For the first time in my career I’m not really tripping because I’m in a good place with myself mentally and I truly believe I’m going to win.”

Such confidence was rarely uncommon for Castillo growing up, where he showed out in class more and more often in high school.  The product of a tough Sacramento upbringing, Castillo started off wrestling as a debt to a high school administrator who saved his tail from the wrath of a potentially angry parent.

“I got into wrestling from getting in trouble,” said Castillo.  “The Vice-Principal of my high school was a wrestling coach and I got in trouble a ton of times that year. The fourth time, he was going to call my mom in a month and I begged him not to because I knew my mom would mess me up.  Then he said, ‘you think you’re so tough I’ll make you a deal: if you go to wrestling practice I won’t call your mom.’ So I went to wrestling practice and got my butt kicked by a bunch of seniors and I haven’t stopped wrestling since.”

After high school and then a successful college wrestling career, Castillo abandoned his love of competing, opting for a secure and steady job.  However, what he didn’t expect was a former high school wrestling competitor providing the inspiration for his next challenge: becoming an MMA fighter.

“Urijah Faber was one of my friends growing up wrestling; we went to different high schools but we ended up wrestling together every summer because the All-Star team is from the Sacramento area.  I knew he was doing it but I was working a desk job at the time and never thought about fighting. I thought I was done with wrestling and I saw Urijah on TV wrestling (laughs) and I emailed him and he told me to come down and check out his gym.  I went and checked out his gym and I saw the life he made for himself and he basically told me, ‘you can have it too because it takes a certain kind of person to become a fighter and I think you have that.’ So I went back to my desk job and thought about it a couple weeks, talked to my friends and family, and three weeks later I packed up my stuff in a U-Haul and moved back to Sacramento.”

Once joining Faber’s fight team, Castillo made his mark fairly quickly, securing wins in either the first or the second round before entering the WEC’s larger stage.  The entire experience taught Castillo more about himself as a fighter than he could have ever imagined.

“I think that my career probably took off really fast.  After seven months of fighting I was already on the big stage in front of 13,000 people in my back yard at ARCO Arena after taking a fight on short notice.  I’ve never backed down from any fight and maybe I wasn’t prepared enough for a high profile fight like that (against Donald Cerrone in 2008) but everything happens for a reason and those wins and those losses taught me a great deal about myself. They humbled me a bunch and losing two in a row (to Shane Roller and Anthony Pettis) and getting knocked out (by Pettis), I think those two losses actually forced me to find my identity as a fighter and because of those two losses I have put together great game plans and I know my identity as a fighter and I’m trying to build on that and keep my win streak going.”

Enter Joe Stevenson, winner of The Ultimate Fighter season 2 and UFC competitor for the last six years.  After back-to-back losses to George Sotiropolous and Mac Danzig, Stevenson is back in a dangerous career predicament, something to which Castillo can testify to personally.  However, if there was a nail in the proverbial Stevenson UFC career coffin, Castillo is gladly readying to hammer it in.

“I actually know where Stevenson’s coming from because if you lose three in a row it’s bad business and you’re looking to get cut; I was in the same boat two fights ago and I know the kind of pressure he’s in.  I think he’s a really tough wrestler but I’m a better wrestler by far.  Credential wise I was a two-time All-American at the NAIA level, I was a national runner-up my senior year.  He’s got a really good jiu-jitsu game, he’s got a great guillotine and great ankle lock submissions but I train at Team Alpha Male and every single one of my team members have been trying to throw guillotines at me left and right.  That’s pretty much our signature move with the Faber team and Joseph Benavidez and that’s what we do, choke the crap out of black belts.”

The term ‘last call’ refers to the final allowance of alcohol at a ‘watering hole’, in essence your finale to the good times of the evening.  For Danny Castillo, who now enters a new shark tank in the UFC, the goal is to stay and play bartender to the careers of those he meets.  Cheers.