It feels like forever ago that Season 3 of Dana White’s Contender Series got off to a slower than normal start with just a single stoppage in the first two weeks and only four athletes being awarded contracts to compete in the UFC.

Since the one-week hiatus for International Fight Week in early July, business has picked up considerably inside the UFC Apex.

Over the last five weeks, 18 fighters have been awarded contracts, including last week’s recipients Omar Morales, Andre Muniz, and Herbert Burns, who kicked off a banner week for the Burns family with a first-round submission win on Tuesday night before his big brother Gilbert ventured to Montevideo, Uruguay and handed Aleksei Kunchenko the first loss of his professional career.

Heading into Tuesday night’s action, there had been 22 contracts handed out in Season 3, one shy of the total number of UFC deals awarded on Season 2, and a new record was established as three more fighters earned the call to the Octagon on Week 8.

Bantamweights Tony Gravely and Sarah Alpar, and welterweight Brok Weaver, all impressed Dana White enough to merit a chance to compete on the big stage, while light heavyweight William Knight was awarded the first developmental deal of the season.

William Knight def. Herdem Alacabek by TKO (strikes) at 4:34 of Round 3
Social Post

What started as a one-sided affair turned into a battle of attrition in the light heavyweight main event.

On the feet in the early going, the Swedish upstart got the better of the exchanges, burying knees into Knight’s midsection in close and snapping his head back with clean jabs in space. After tossing him to the canvas, Alacabek moved into back mount, threatening with a rear-naked choke. When Knight shucked him off and moved into top position, Alacabek attacked with an armbar from his back before getting back to his feet.

Early in the second, Alacabek went back to work in the clinch, landing a stream of shots to the midsection as Knight responded with single shots. Midway through the round, the unbeaten Swedish fighter scored another impactful takedown, moving right into side control.

But Knight got back to his feet and turned the tables, using a deep overhook to deny a takedown attempt and land in full mount, raining down unanswered blows and attacking an Americana at the end of the second.

Alacabek came forward to start the third, but Knight exploded into the air and connected with a jumping knee that landed square on the chin. To his credit, the Swedish prospect cleared the cobwebs and went back on the offensive, but Knight again managed to stuff the takedown and land more hard shots.

Down the stretch, Knight successfully used Alacabek’s aggression against him, ducking under for takedowns and denying others, opening up with hammerfists and elbows before climbing into mount, opening up Alacabek and forcing referee Jason Herzog to call a stop to the action with less than 30 seconds remaining in the fight.

Smyth slithered into the cage like his godfather, new UFC Hall of Famer Rashad Evans, and showed his explosiveness to start, landing a kick immediately before securing a pair of high amplitude takedowns in the early going. But midway through the frame, Weaver got back to his feet, and although he wasn’t able to land much offense, the more seasoned competitor did an excellent job of stuffing Smyth’s takedown attempts and making him work.

It was more of the same to start the second, as Smyth once again pressed forward in search of the takedown, only to have Weaver stuff him along the fence. Midway through the frame, the roles were reversed, with Weaver taking the control position and hunting for takedowns, forcing Smyth to defend. Late in the round, Smyth was able to get Weaver to the ground, connecting with a knee as the Alabama resident rose to his feet.

Smyth started the third hunting for another takedown, finally elevating Weaver and sweeping out his leg as he plunged him to the canvas. Weaver was able to get up and get off some offense, swarming with short flurries of punches, while Smyth countered with the occasional elbow and knees to the body.

With just under a minute left, Smyth momentarily dumped Weaver to the ground again, landing a short shot at he got back to his feet and keeping Weaver from getting loose with his hands as the final horn sounded.

In the end, the judges favored Weaver’s short bursts of offense and ability to keep things standing throughout much of the final two rounds.

Young and Alpar came out of the gate guns blazing, both swinging wildly and getting themselves off balance as they looked to land something significant. Nothing crisp found a home, but Alpar climbed onto Young’s back, only to be reversed, leading to the Knoxville MMA product controlling the remainder of the round with her grappling and work from the clinch along the fence.

In the second, the roles were reversed, with Young connecting with the best blow early, only to have Alpar take things to the ground and hunt for the finish. With one hook in, the LFA titleholder fished her forearm under Young’s chin, sunk in her second hook and squeezed out the tap.

Tony Gravely def. Ray Rodriguez by TKO (strikes) at 2:16 of Round 3
Social Post

These bantamweights got after it right from the jump, with Rodriguez connecting with a kick almost immediately and Gravely calmly returning fire, setting the tempo for this wildly entertaining, action-packed affair.

Gravely controlled the majority of the opening five minutes, stinging Rodriguez with a collection of sharp left hands and hitting a couple well-timed takedowns. To his credit, Rodriguez remained calm on the canvas, stifling Gravely’s attempts to pass and set up submissions before getting back to his feet and immediately firing off punches and kicks before finishing the round with a takedown of his own.

While the CES champ started the second with a sharp head kick, Rodriguez seemed to turn the tables soon after, taking Gravely down and landing in back mount, looking to lock up a body triangle. But before he could settle into the position, Gravely turned into his guard, got back to his feet and promptly scooped Rodriguez into the air, driving him back down into the mat.

Late in the frame, Gravely meticulously worked his way onto Rodriguez’s back, momentarily threatening with a rear-naked choke, however “The Judge” was able to squirm out, sending this one to the third.

Knowing that he needed a finish, Rodriguez rushed across the cage to start the final round, elevating in hopes of landing a flying knee right out of the chute. But Gravely saw it coming, connected with a left hand and when Rodriguez fell to the canvas, the 27-year-old from Virginia took advantage, ultimately pounding out a finish just over two minutes into the frame.

This was a dominant performance from one of the most UFC-ready competitors to grace the Contender Series this year and he did it against another seasoned, talented fighter.

Julius Anglickas def. Karl Reed by submission (rear-naked choke) at 3:25 of Round 3 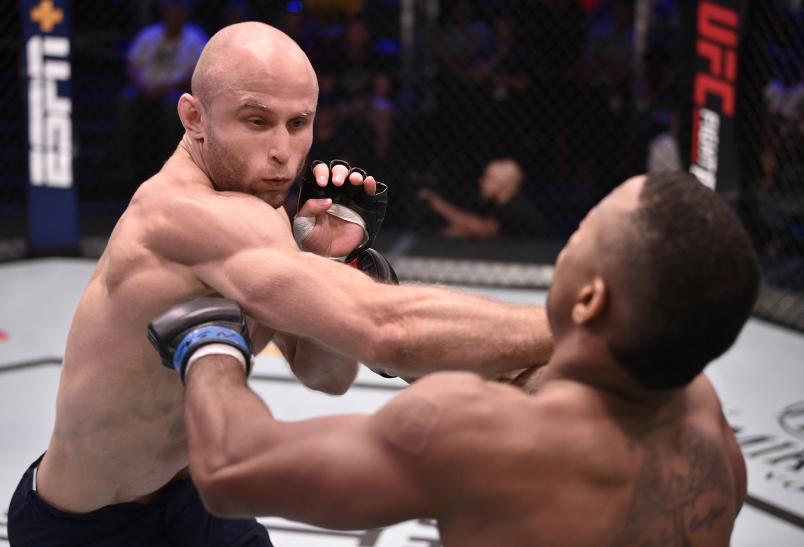 The evening kicked off in the light heavyweight division with a clash between evenly matched 6-1 fighters who both have Cameron Olson to thank for the lone blemish on their resumes.

In each of the first two rounds, Reed and Anglickas spent the first half of the frame grinding things out along the fence and on the ground, neither man really gaining a significant advantage or doing any real damage. Late in each frame, the duo opened things up a little, Anglickas getting looser with his hands and Reed having greater success on the canvas.

Early in the third, Anglickas looked to hurt a fading Reed, connecting with a series of clean shots in space, but he promptly pushed forward into the clinch, where Reed was initially able to slow things down. Undaunted, the reigning LFA light heavyweight champion dumped Reed to the canvas and continued grinding, eventually latching onto a rear-naked choke and forcing Reed to tap.

It wasn’t flashy, but Anglickas stayed patient, continued pressing forward and took advantage of the opportunity to finish when it was present, submitting Reed and pushing his winning streak to five.