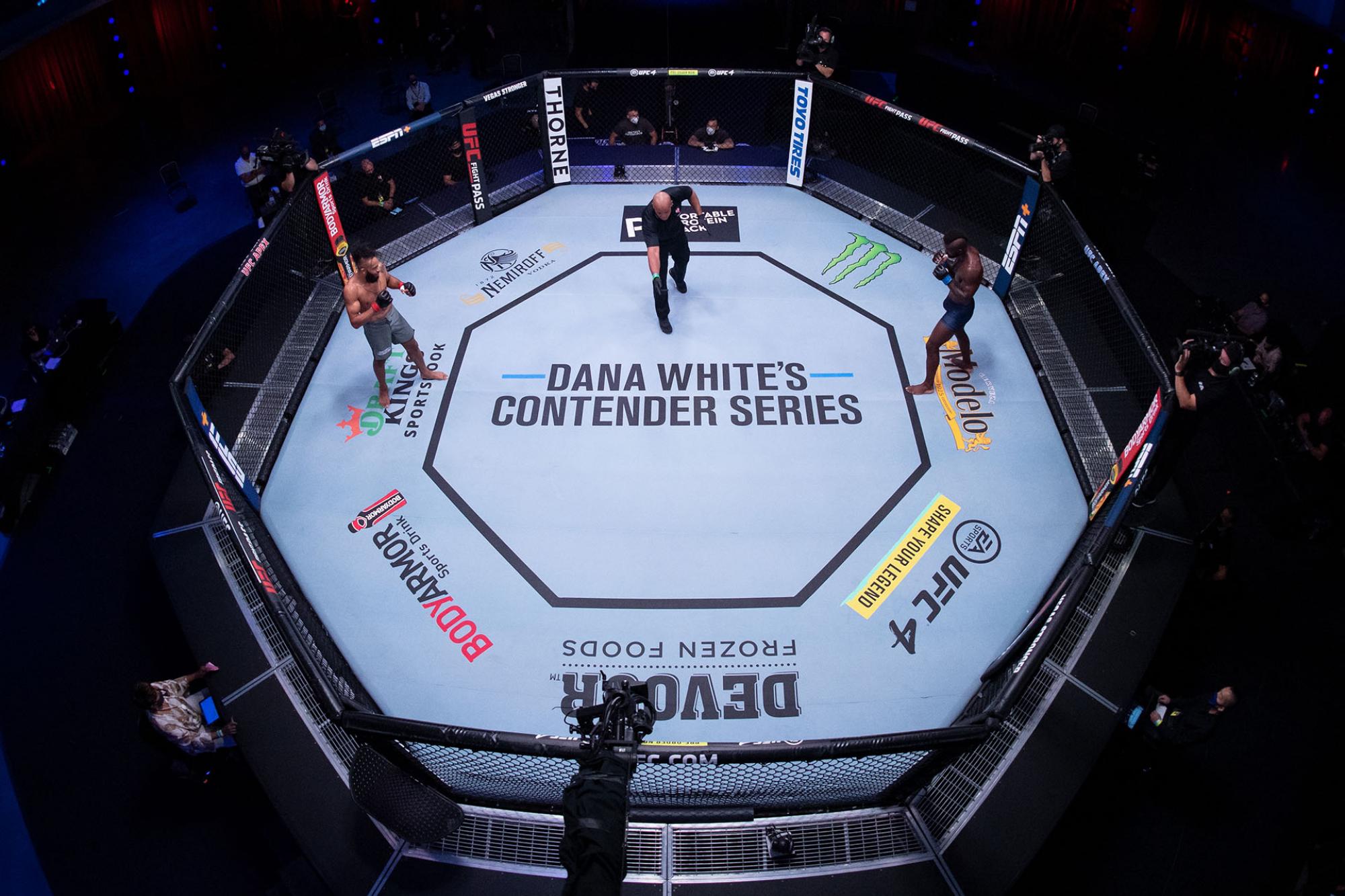 Through the first five weeks of the season, 19 fighters across nine divisions have earned UFC contracts, led by four middleweights, the Cosce brothers at welterweight, and strawweights Cory McKenna and Cheyanne Buys.

This week, five more pairs of hopefuls headed into the cage in hopes of impressing Dana White and the UFC matchmakers, including a middleweight “post-hype sleeper,” a menacing light heavyweight finisher, and a pair of promising bantamweights.

For the third time in six weeks, the UFC President handed out four contracts, adding Tafon Nchukwi to the light heavyweight ranks, Phillip Hawes and Aliaskhab Khizriev to the middleweight division, and Drako Rodriguez to the 135-pound weight class. Additionally, White invited lightweight winner Sherrard Blackledge back for a second appearance later this year after the Las Vegas native emerged victorious in a dogfight with Cameron Church.

Here’s a look at what transpired...

Middleweights with plenty of experience collided in Tuesday night’s opener as Aliaskhab Khizriev put his 12-fight winning streak on the line against Japanese veteran Henrique Shiguemoto, with Chris Tognoni serving as the third man in the cage.

Duelling kicks to start the fight turned into a scramble and gave Khizriev the opportunity to secure the clinch around the waist of Shiguemoto. After adjusting his grip and finding the right opportunity, the unbeaten Dagestani middleweight elevated Shiguemoto, climbed on his back, flattened him out, and sunk in the rear-naked choke.

This was an absolutely dominant effort and the kind of performance that will no doubt secure Khizriev a contract and a place on the list of fighters to watch going forward in the middleweight division.

Talented 24-year-olds Mana Martinez and Drako Rodriguez clashed in this meeting of regional standouts ready to take the next step forward in their respective careers, with Marc Goddard overseeing the festivities.

Early in the fight, the power discrepancy between the two was apparent as Rodriguez’s attacks had a greater visible impact on Martinez in their initial exchanges. A minute into the frame, Rodriguez caught a kick and dumped Martinez to the canvas, where a scramble ensued, with Martinez ultimately landing in top position.

But Rodriguez was unbothered, quickly throwing up a triangle choke off his back and sinking it in deep. Martinez tried to elevate him and slam him to the canvas, but Rodriguez countered nicely, hooking the leg and forcing Martinez to returning him to the mat. From there, Rodriguez continued to pull down on the head, deepening the squeeze until Martinez passed out, bringing the fight to a close.

Just a beautiful performance from the highly touted former King of the Cage standout who might finally be making his way to the UFC roster.

Veterans looking to punch their ticket to the UFC clashed in the middle of this week’s fight card as Phillip Hawes squared off with Khadzi Bestaev in an intriguing middleweight matchup. Chris Tognoni chaperoned the action.

Bestaev tried to use his length to keep Hawes at range, but the returning Contender Series competitor continued to march forward, punishing Bestaev’s lead leg with heavy kicks. As they traded strikes on the inner loop of the Octagon, Hawes threw a counter right hand that caught Bestaev flush and spun him to the canvas in a heap.

Follow up blows rained down and Tognoni was in quickly to wave it off, giving Hawes his fourth straight victory and biggest win of his career. After being heralded as a can’t miss prospect early in his career, it appears that Hawes is finally starting to put it all together.

Official Result: Phillip Hawes def. Khadzi Bestaev by TKO (strikes) at 1:18 of Round 1

Church came forward pressing the action to start, reaching with his jab and low kicks before Blackledge closed the distance and initiated the clinch. Church was able to defend the takedown, separate and go back on the offensive, once again attacking with jabs and low kicks as Blackledge fired off counters ion return.

Right when it seemed as if Church was starting to find a rhythm, Blackledge drove through a double leg and put him on the canvas, but the Californian was able to quickly get back to his feet. Every time Church started to get into a flow, Blackledge would change up the terms of engagement, closing the distance and forcing Church to work from the clinch, and every time, Church would break free, return to the center, and resume slinging solid shots.

With under a minute to go in the round, Blackledge once again timed his level change perfectly, driving Church into the canvas, where he opened up with solid ground-and-pound through to the horn.

The lightweights got right back to slinging leather out of the chute to start the second, but the action was quickly halted as Blackledge connected with a sharp knee below the belt. Church took a minute to compose himself, but got right back after it, continuing to be the aggressor, though Blackledge did well to connect with quality shots moving backwards.

There was a second pause in the action two minutes into the frame, as Church returned the low blow favor to Blackledge, who took a knee and recovered, with both men drawing a warning from Goddard.

Upon the restart, Blackledge closed the distance, initiating the clinch and then driving Church to the canvas on a reshoot, only to have Church throw up an armbar attempt from his back. While he made it back to his feet out of the submission attempt, Blackledge quickly put Church back on the canvas, where he worked to isolate the right hand, only to have Church briefly threaten a kimura.

Once again, Church threw up an armbar attempt, but Blackledge slammed his way out before opening up with some strikes and working around to the back as Church tried to get to his feet just before the horn.

After the lightweights opened the third throwing hands just as they had in the first two frames, Blackledge again closed the distance and took the fight to the ground, patiently landing ground-and-pound and burning time off the clock. Church tried to shift his hips and create space, but Blackledge was one step ahead, defending well and maintaining his position.

With 90 seconds left, Church kicked free, but Blackledge quickly shot back in, once again putting Church’s shoulders to the mat. While Church never stopped looking for openings and trying to work free, it was all Blackledge from top position in the third as the Las Vegas resident closed out the fight in complete control.

When the judges scores were added up, it was Blackledge who maintained his unbeaten record, earning a clean sweep of the scorecards with a hard fought victory.

It was unbeaten finisher Tafon Nchukwi against streaking Alaska Fighting Championship product Al Matavao in what profiled as a must-see light heavyweight pairing to close out on the action on Tuesday night. Veteran official Chris Tognoni shared the Octagon with the headlining duo.

Matavao came out looking to be the aggressor, attacking with a variety of punches and kicks, moving well and switching stances. Nchukwi responded with a single clubbing left hand that stung Matavao, following it up with a heavy kick to the body. Matavao dealt with both well and continued trying to press the action, throwing combinations and Nchukwi clambered forward, trying to find a home for something serious.

It was speed and combinations versus brute power, as Matavao would throw multiples and variety in each exchange, while Nchukwi continued to hunt for that one blow that shifted the momentum or ended the fight, offering nothing but single shots as Matavao continued to move well. Late in the frame, as Matavao’s pace slowed, Nchukwi started having more success, opening up a cut at the edge of Matavao’s left eye with a knee strike.

Nchukwi started the second stalking Matavao, pressing forward behind power shots, but struggling to keep him hemmed in. Matavao continued to flash quick hands, connecting with a couple quick counters, but the power and consistent pressure of Nchukwi was clearly starting to take its toll.

As Matavao looked to circle out into space following another exchange close to the fence, Nchukwi threw up a left high kick that connected flush, ending the fight in spectacular fashion.