“At 145lbs he’s not going to be the fastest, more conditioned fighter. He’s just another well-rounded 45’er.” - Cub Swanson on Frankie Edgar 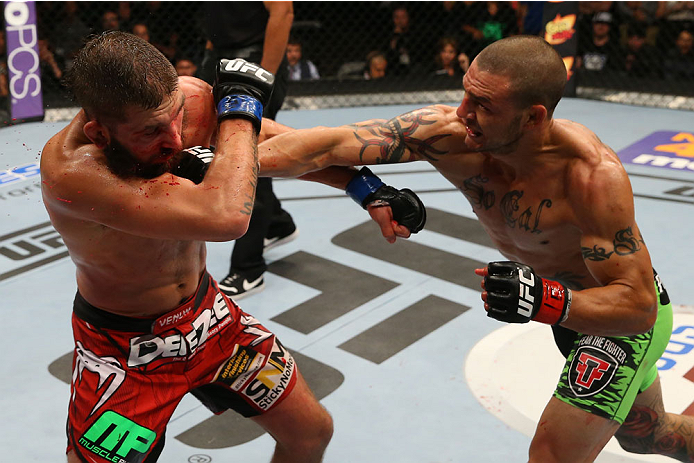 Main events are main events for a reason. They are meant to feature the most anticipated matchup on any given fight card, and if all the stars are aligned, the main event will deliver on all levels.

The fans are happy. The bosses are happy. And one fighter emerges having proved to the world that he was the best on fight night.

So when Cub Swanson meets Frankie Edgar this weekend in Austin’s Frank Erwin Center on FOX Sports 1, there are no other two fighters in the building with more at stake, and that will make for a main event for the ages, with the winner emerging as the consensus number one contender for the featherweight strap.

“To beat Frankie I am going to have to be very smart,” Swanson says. “I am going to have to be patient and wait for the moment to land a big shot. I know he’s going to be tough to finish because nobody has, but I’ve studied film on him and I know what he’s going to try to do to me. My plan is to go out there and be the first person to ever finish Edgar. I feel like I’ve already done enough to have earned a title shot, but if they’re putting one more test in front of me, Frankie is a big one, and I plan to fight for the title so…”

For Swanson, the road to Jose Aldo leads through the former lightweight champion. And even though Cub is riding an impressive six-fight win streak, with four of those by way of knockout or TKO, he knows just how big a challenge Edgar is.

“He has a big name and he’s done a lot in this sport,” he said. “I’ve always admired Frankie as a fighter, and that’s why I took the fight and that’s why I’m excited about it. To be the best, I have to beat the best, and at this point in my career, I’m ready for it.”

Cub hasn’t always believed in himself.

After winning his first two fights in the WEC in impressive fashion, he was given a huge opportunity to prove he wasn’t a fluke against Jens Pulver. He lost in the first round by way of a guillotine choke. He then lost the big fights again and again. Chad Mendes. And of course, the flying knee TKO against Jose Aldo, which he’ll never live down, as it makes every UFC knockout highlight reel.

“I never shy away from that highlight reel,” he said. “I’ve seen it a million times, but what it tells me is I can take his best shot and not be knocked out. He broke my face with that knee but I didn’t go out, and that means next time I fight him I’m going in with the confidence that I took his best shot.  With Pulver, I had a huge opportunity, and he iced me by pulling out of the first fight. And then I had to train a whole other camp for that fight, and me being a rookie and him being a veteran at the time, it got me out of my element. The bright lights got to me and I didn’t perform. Not only did I not perform, I was horrible. And that has worked against me for a long time, but now is my time. I’m older, more mature, and I know what it takes to beat the best guys out there now.”

“Cub is so motivated right now, that when he gets out of bed, he knows he’s going to grind it out today,” Jackson says. “And that makes my job easier. Look, both of these guys feel like they don’t get the respect they deserve. Edgar was disrespected when he held the belt at 155. Cub has not only fought some of the best guys around of late, he’s beaten them, and in impressive fashion. Both of these guys already deserve a title shot. But here we are, and if you’re a fight fan, you’re not going to see a better fight than when two guys are out there with seemingly their careers on the line.”

And while Swanson understands the career trajectory he’s had has put him in a not so great light with his bosses, what he can’t accept is the way his wins are downplayed by some after the fact.

“I’ve been pushing and pushing and I’ve always had to face the toughest guys,” he said. “But when I beat them the sentiment is always, ‘Oh well he wasn’t the toughest anyway.’ I feel like when I beat these guys that I’m supposed to beat, they get discredited all of sudden. I started off my career with a lot of steam and I’ve had a lot of hiccups along the way, and I feel like I’ve let a lot of people down up at the top, and I’ve never been able to shake that. I’m getting the big fights now, but I’ve been around the longest as a featherweight, and I’ve never fought for a title. I’m overdue.”

Overdue, but not forgotten, and he knows this is the moment of truth in his career resurgence, so he upped the ante in training. He sparred regularly with former world boxing champion Tim “Desert Storm” Bradley and says he was able to hold his own, adding confidence to his standup game.

“I was honored that he kept inviting me back to spar, that I was able to give him good sessions. I don’t think Frankie can throw as hard or as fast as Bradley,” he said.

He also brought in 125-pound and 135-pound wrestlers to add quickness to his ground game. But he also thinks he has a weight-class advantage over Edgar that not too many people have considered.

“When he fought at 155 he was out-conditioning everybody,” he said. “They were hitting him hard in the beginning of fights and he wasn’t going away, so being the faster, more conditioned fighter, all he had to do was weather the storm and wait for his opponent to get tired to impose his will. At 145 pounds he’s not going to be the fastest, more conditioned fighter. He’s just another well-rounded 45er.”

“He’s on the upswing in his career and he sees Frankie Edgar as a huge obstacle, so he’s taking him very seriously.”