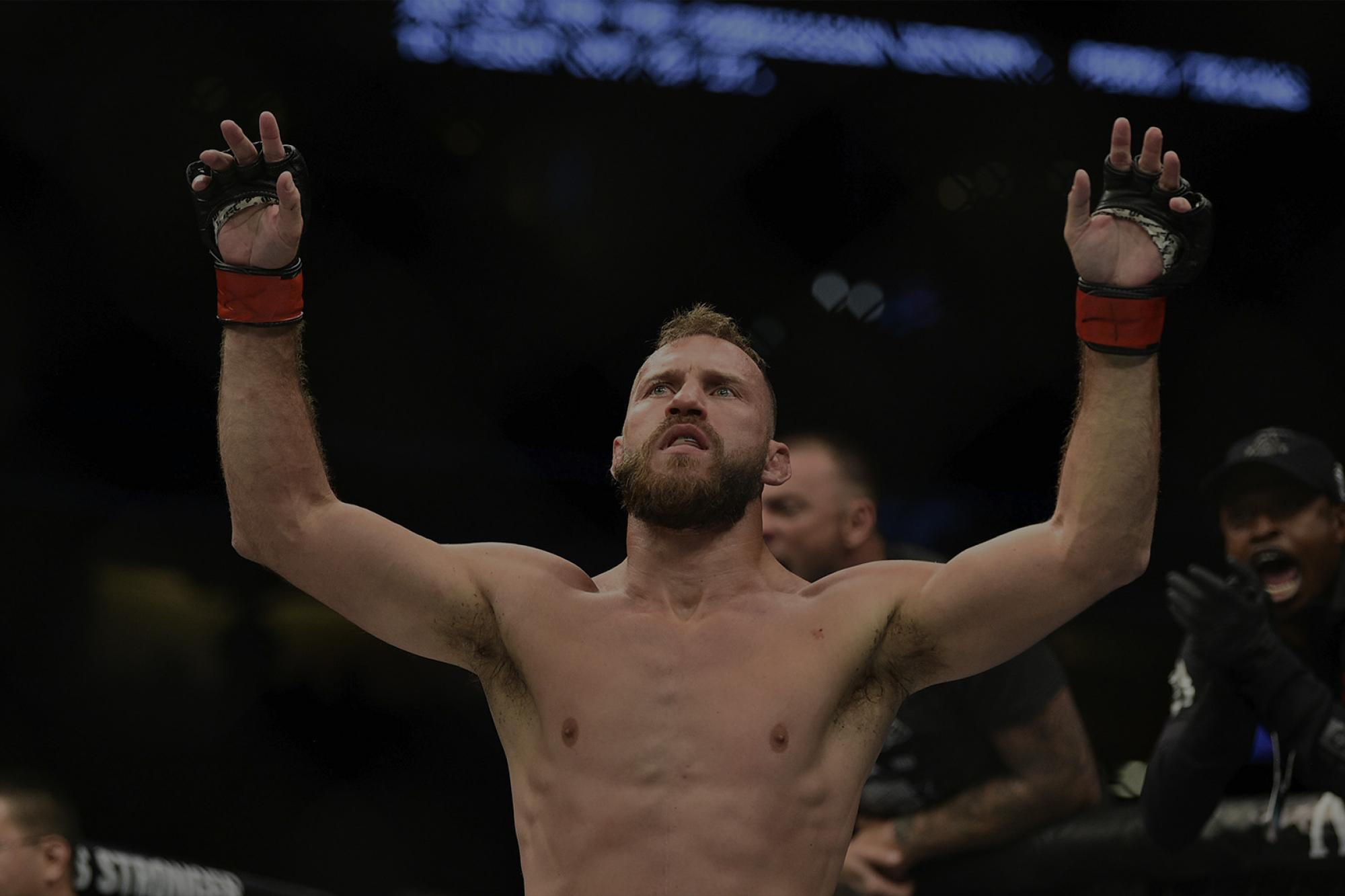 Just two months ago, Donald Cerrone stood in the center of the Octagon with his trademark Cowboy hat on his head, his son Dacson in his arms and a wide smile plastered on his face as the crowd at Pepsi Center showered him with applause.

Although he’s based just outside of Albuquerque, New Mexico, Cerrone was raised in Denver, Colorado and that evening was not only the UFC’s 25th Anniversary celebration, but it was also the return of one of the city’s favorite fighting sons and he delivered a vintage “Cowboy” performance while establishing a new record for the most wins in UFC history.

Pitted against Mike Perry in an all-action scrap that turned into a grudge match as tensions between Cerrone and his former team at Jackson-Wink MMA boiled over, the 45-fight veteran took advantage of a tactical error by Perry to secure the victory, dominating a prolonged grappling exchange initiated by the knockout artist before finishing with a belly-down armbar just before the close of the first round.

“Being at home was cool,” Cerrone said of his triumphant night in Denver and special family moment in the cage following the victory. “I’ve had a lot of people who have worked for the UFC over the years come to me afterwards and say, ‘Man, I’ve seen a lot of great moments in the UFC and that one, by far, was the coolest thing we’ve ever seen.’

“It was cool to be a part of that moment — setting the record, at home for the 25th Anniversary. You couldn’t have written it any better.”

Never one to spend too much time on the sidelines, Cerrone is set to kick off 2019 with a return to the lightweight division this weekend in Brooklyn, where he takes on surging upstart Alexander Hernandez in the final preliminary card fight of the evening.

After spending the first nine years of his career as a perennial contender in the 155-pound weight class, the 35-year-old Cerrone ventured up to welterweight at the start of 2016, where he rattled off four straight stoppage wins.

Standing on a sun-soaked football field in Ottawa, Ontario prior to his bout with Patrick Cote in the midst of that run, the veteran gunslinger was content as could be, enjoying a training camp with few restrictions or headaches. And as the positive results kept piling up, a potential move back down the scale didn’t seem like something that would ever materialize.

“I was thinking about that last night when I was lying in bed, like, ‘Man, you could be on weight, eating a hamburger right now!’” laughed Cerrone, who will make the walk to the Octagon for the 30th time this weekend at Barclays Center.

But a 1-4 run featuring losses to a quartet of elite welterweight talents combined with the birth of his son got Cerrone thinking about not only his future, but also the legacy he wants to leave behind when the day finally comes that he rides off into the sunset, never to fight again.

“I don’t know if it was missing or I was just okay with just fighting just to fight,” said Cerrone when asked about declaring “Cowboy’s back!” at the end of his post-fight interview with Paul Felder following his win over Perry in November. “(I was kind of) going through the motions almost like an “another day at the office” kind of thing, not here with a purpose like I am now, back at ’55, going for the title run and cementing my legacy.

And for Cerrone, it’s those halcyon days of eating hamburgers and washing them down with an ice-cold Budweiser during training camp that have prompted his move back to lightweight.

While the majority of his work in advance of Saturday’s fight with Hernandez took place at his BMF Ranch in Edgewood, New Mexico, Cerrone did make the trip into Albuquerque to get in a sparring day.

“I went down and sparred at the other Jackson’s Gym — they have another gym — and Greg (Jackson) was there and it was cool, it was weird,” explained Cerrone, who had a very public, very heated falling out with Jackson’s long-time coaching partner Mike Winkeljohn in advance of his fight with Perry, who had recently migrated to the renowned gym. “I’ve got nothing but love for Greg, but I just wish that when the time came, I wish he would have picked his boy and he didn’t, so there’s kind of a hurt in my heart for that.

There are no easy outs in the lightweight division and the returning veteran is diving straight back into the deep end of things with weekend when he squares off with Hernandez, one of the breakout performers of 2018.

Called up to make his debut on short notice at UFC 222, the ultra-confident Hernandez clocked ranked veteran Beneil Dariush with a left hand that turned off the decorated grappler’s lights in a flash. Just under five months later, he ventured to Calgary and thoroughly outclassed emerging Canadian Olivier Aubin-Mercier to collect his second UFC victory and extend his winning streak to eight.

The 26-year-old upstart has not been shy about proclaiming himself a future champion or sharing his thoughts on those who stand in the way of him reaching the top of the division, literally and figuratively, and it has been no different in advance of this weekend’s matchup with Cerrone.

Hernandez has said he’ll treat the veteran like “every other stepping stone” and described him as “just another step in the ladder to the top,” neither of which Cerrone had previously heard, but both of which amuse him to no end.

“I don’t watch or read any of that s***, so this is the first I’ve heard about it, but man, it’s a big-*** stepping stone,” offered Cerrone. “I don’t even know if it’s a stepping stone as much as it’s a cliff you’ve got to climb up. There’s nothing this kid is going to show me (that’s new). I’ve seen it all, man.”

As he considered Hernandez’s comments, Cerrone ventured a guess that he has more losses than his impending opponent has career fights, adding that he might even have more finishes by way of triangle choke than Hernandez does appearances in the cage.

The “losses vs. fights” prop bet is actually a push, as Cerrone has dropped 11 contests in his career, which is the same number of starts Hernandez has made since going pro in October 2012, and although he doesn’t quite have that many wins by triangle choke alone (he only has eight), Cerrone has earned registered more submission finishes (17) during the dozen years he’s spent competing in the cage than his brash adversary has fights.

“I’ve been in the game so long, I’ve seen exactly his style, his type come up and there is nothing extra special (about him),” Cerrone continued. “Can I get caught? Sure, absolutely — I’m not going to say I’m invincible — but he’s just going to come out hard, try and wrestle me and that’s what they do.”

Making the walk, putting on entertaining fights and setting UFC records is what Cerrone does, and following a memorable performance at home in Denver, “Cowboy” is indeed back and he has no plans to slow down any time soon.